WHISTLING GARDENS IS owned by Darren and Wanda Heimbecker. The 20-acre garden is set on a 56-acre farm, in Wilsonville, near Brantford, Ontario. It opened to the public in 2006 and is the only private botanical garden in Canada.

The garden was constructed by Darren with one main helper. It now consists of gardens and various collections, featuring over 4,000 different plant species and cultivars. Paths are wheelchair accessible so all can visit and admire flower beds, many bordered with native plants. The garden includes small to large water features including a babbling brook and a large pond.

The conifer collection has over 2,300 different taxa, making it the largest public display of conifers in North America, possibly in the world. Many of the specimens in the conifer collection are the only examples of their type in all of Canada. One exciting plant, the Baishan fir (Abies beshanzuensis)  is very rare with only three specimens left in the wild. The conifers are displayed both in island beds and mixed in harmoniously with other plants.

There are over 1,200 varieties of peonies in display beds and mixed with other plants, making it North America's largest public peony collection. The gardens are included in the International Garden Destination Map produced by the American Peony Society.

The rock garden occupies nearly an acre of alpine plants, succulents, cacti, perennials, dwarf conifers, and Asian maples. These are nestled in between local limestone and granite rocks. There is a fossil collection in this garden, displaying stony specimens of plants and small aquatic life from the ancient seas of the Lower Devonian and Upper Silurian Periods.

In the spring, 1,200 muscari bulbs create a blue river between the boulders. There are many other bulbs as well and beautiful buns such as Dianthus freynii.

Hundreds of rare trees, especially those native to southern Ontario, grow throughout the gardens. This collection focuses on uncommon species and new varieties. Some plants are being tested and evaluated at Whistling Gardens for the first time in Canada to determine hardiness, ornamental value, and economic production viability. Different shrubs are used extensively in the beds. New varieties are continuously brought in for evaluation. Other shrubs include magnolia, Cercis canadensis, cornus and many Acer japonicum. Spring, summer, and fall color is provided by many annuals, grasses, iris, lilies, echinacea, etc.

The Marsh Garden (Le Marais) was inspired by the Palace of Versailles. The main feature is a living tree fountain. Water drips from the branches of a contorted willow on an island, surrounded by aquatic and semi-aquatic plants.

If this was not enough, Darren has created formal gardens. The fountain garden was inspired by Andre Le Notre's 1634 design at the Palace of Versailles. It has over 90 (at the moment) fountains in a granite amphitheater. The fountains are choreographed to play to Darren’s own compositions using state of the art digital technology.

The Temple Garden has a classical design with the use of circles and squares. A wrought iron dome, on pillars 10 feet (3 m) high is surrounded by four fountains. There are floral displays and statues completing this garden.

As an environmentalist, Darren encourages wildlife. You may see many birds; even a killdeer pretending to be injured, to draw you away from its eggs. Butterflies flit among the summer flowers. Endangered badgers have been seen on the property.

When visiting the garden, you may see a particular shrub you like. Always ask about it! Darren has a nursery attached, and if he doesn’t have that particular plant he will try and get it.

This is one of the most exciting gardens in Ontario, all created by the hard work of a single determined man, and well deserves this award. 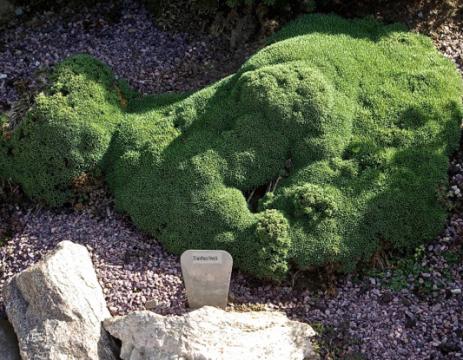