BACK IN 2010, I visited Rex Murfitt and he showed me his expert technique for placing rocks and plants in a trough, right in his well-stocked alpine house.

We started with an empty wooden, rectangular box in place of a trough. It measured about 18 by 15 inches (45 cm x 38cm), with low sides. He often used it to demonstrate trough planting to garden clubs. He grabbed a handsome hunk of tufa, three times the height of the box, from a handy shelf and rested it on the bottom. Then he added another, slightly smaller one. He arranged them in a harmonious manner, with shapes that related to one another but were not touching. One would put rocks in a trough the same way, touching the bottom of the trough for stability, but eventually, the lower half of the rocks would be covered with soil mix and plants. The space between the tufa pieces, he explained, would be the planting space.

Then he dipped up his all-purpose trough-planting medium. It was composed of roughly one part loamy soil, one part tiny pebbles, and two parts rough sand. He filled the box most of the way to the top with this mix, brushing it off the rocks and around the base.

He took everything out of the box and showed how a different arrangement could be made the same way. He decided on tall, narrow pieces of tufa and arranged them in parallel. Then he added soil as if readying it for planting.

Next, he looked around the alpine house and found a small round trough with a chip in it. He showed the steps again, arranging three nice little tufa “mountains” in it after brushing it off and putting a screen over the drainage hole to keep insects from crawling in. He added the soil mix around and between the tufa pieces. It was ready to plant.

We looked around the alpine house and there were many succulents and small evergreen trees to consider. He took a small tree and placed it between the three rocks at the very top. “This is the absolute wrong way to do it,” he said. That is because, in an alpine site, a tree would hunker down below where there is protection from wind and strong sun, rather than endure maximum exposure to the elements. He took the tree out and placed small, flat saxifraga in that spot.

Then he uprooted some potted plants, shook most of the soil off the roots, and placed them in the small trough. The tree went in at the bottom of a rock, next to the lip of the trough. He felt the lack of some hens and chicks so he got some from his nearby garden and lined them up in the trough. He added some small rock pieces along with the plants.

We liked the effort, so he watered the trough and placed it in his garden, where it looked as if it had always been. It looked so easy! That is Rex’s way and we will miss him so much. 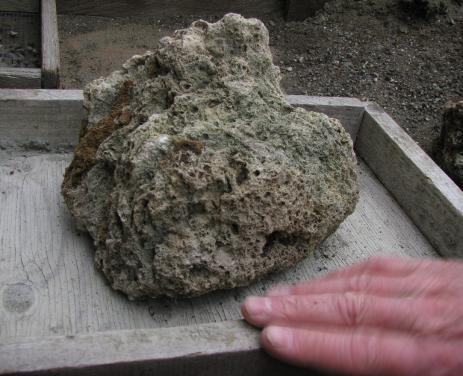