Tufa is much sought after by rock gardeners, but it is surprising how little information is available about what tufa is, how it forms, and what its properties are. In fact, I was able to find only one set of articles in the Quarterly (back when it was called the Bulletin) about tufa and that was in 1975 (vol.33: 158-161, 167-171). Yet many experienced rock gardeners are convinced that planting on tufa is the key to growing some of the more difficult rock garden plants in our problematic climate – Porophyllum saxifrages, tiny lime- loving rock ferns, and hardy gesneriads, for example. And tufa is intrinsically interesting and attractive, with its complex texture and intricate porous structure. But what exactly is tufa?

The first thing to understand is that tufa is not volcanic tuff, a porous rock sometimes erroneously called tufa, perhaps because of
the similarity of the names. Tufa is also sometimes mistaken for coral, which is a porous calcium carbonate rock formed by secretions from marine invertebrates. However, tufa is also a calcareous (limy) rock based on calcium carbonate – the mineral calcite. Though the deep calcareous glacial deposits in much of Michigan and the southern Great Lakes region, and our calcareous bedrock, are a source of despair for people who want to grow rhododendrons and other ericaceous plants, these deposits do offer some advantages for rock gardeners. We have a lot of limestone available for our gardens and, most especially, it means we have deposits of tufa.

To get an idea of what our Great Lakes tufa is, it makes sense to start with carbonate rock. In the Great Lakes region, this is limestone (consisting mostly of the mineral calcium carbonate or calcite) or dolomitic limestone, (which contains some amount of magnesium in addition to calcium). In the southern Great Lakes region, this is usually found as rock pulverized by the glaciers in our moraines and tills, although we also have some areas of solid limestone rock at or near the surface. The other players in this story are water and carbon dioxide. Rainwater picks up some carbon dioxide from the air to form very weak carbonic acid, but much more carbonic acid is then formed in the soil from the carbon dioxide produced by the decay of organic materials. Some limestone is dissolved by this acid, forming calcium bicarbonate as dissolved ions in the groundwater.

The formation of tufa is in effect a reversal of this dissolving process in that groundwater rich in dissolved carbonate and carbon dioxide wells up from the ground and loses carbon dioxide due to warming, consumption by photosynthesizing plants, or agitation and evaporation. When this happens, calcium is reprecipitated as the carbonate in the vicinity of the springs or seeps. So tufa and similar rocks are quite different from typical limestones, in that they are not deposited in layers through sedimentation, but rather formed by a chemical process, even though made of the same mineral.

These “chemical limestones” take several forms. In some caves it is deposited as stalactites and stalagmites. In hot springs, it may be deposited as travertine. In lakes, it precipitates as fine particles, often on plants, and, mixed with clay and organic matter, forms whitish bottom sediments known as marl. And when water at normal (cool) temperatures emerges from the ground at seeps or springs, either on flat areas (such as in fens) or on hillsides, it forms a rock similar to travertine, but softer and more porous: the tufa beloved of rock gardeners.

Tufa deposits are often highly restricted and difficult of access. Many of the more accessible deposits were utilized for building material or other uses. Near large tufa deposits, as in northern Ohio and areas near the Thames River in southern Ontario, walls, foundations, and even stone veneer were all made from the easy-to-shape tufa. In pioneer times, tufa, and also marl deposits, were an important resource and extensively used as a source of lime. Tufa springs were also converted to wells or occasionally even exploited commercially on a small scale as mineral springs.

Most people think of rocks as ancient, and all our sedimentary rocks in the southern Great Lakes region are indeed hundreds of millions of years old. But another interesting feature of tufa in our area is that it is a very recently formed rock, relatively speaking, and the process of tufa formation is ongoing. While the tufa used by rock gardeners is mostly hundreds or thousands of years old, that is very young compared to the ages we usually associate with rock. Tufa is still actively forming in many areas, though usually on a small scale. The late Fred Case famously had an old beer can partially encased in tufa – he used it as a demonstration, not as a rock garden feature.

Tufa is irregular in shape and variable in density and texture depending on the circumstances of its deposition. Much of this variability is due to the tufa forming on and around plants that are growing in the sites where the tufa wells up, typically lime-loving algae, mosses and smaller herbaceous wetland plants, such as sedges, grasses, and horsetails. Indeed, certain mosses and algae have been thought to be important in the formation of tufa. On very active hillside springs that form “tufa cascades,” branches, trunks of small trees, and other rocks from the slope are all incorporated; the organic materials, of course, decaying over time, leaving holes. A very large tufa cascade existed on the north bank of the Thames River, near Komoka, Ontario until destroyed in the early 1900s, though large tufa boulders are still present along the river there. Many pieces of tufa are decorated by smaller but recognizable traceries of various mosses, horsetails, and other plant parts enshrined in calcite. Indeed, tufa springs are sometimes described as “petrifying springs.” Some macroscopic terrestrial animals may also be incorporated, especially snail shells. These irregularities can make the surface rough with many fine sharp points; handle tufa with gloves!

Tufa deposits in the portions of the Great Lakes region with calcareous soils are not necessarily rare, but they are hard to find, usually being concealed just under the ground, in wetlands (or former wetlands), or at the bottom of slopes in valleys. Occasionally, tufa boulders will lie on the surface near riverbanks, having had the soil eroded from around them. In parts of northern Ohio, where vast wetlands with calcareous seeps and tufa springs (locally called “blue holes”) were drained and are now farmed, tufa near the surface is sometimes hit by tilling equipment and then piled in the fencerows and field edges, forming the primary source of tufa for rock gardeners in the region. River valley deposits are usually more localized, and intrinsically more difficult of access. A few rock gardens in Michigan have tufa from river valley deposits. These were mostly laboriously hauled out of the valleys; but rarely, good fortune places a road in
the river valley below a slope with a tufa deposit one is permitted to harvest. In southwestern Michigan, where extensive deposits of tufa occur along the St. Joseph River, there is even a tufa cave, Bear Cave, locally a minor tourist attraction near the small town of Buchanan. For many years, the primary source of tufa for northeastern United States rock gardeners was the Ilion Gorge, in New York, where the tufa also was formed by seeps and cascades coming out of the slopes in a river valley.

The porous and soft (relative to other rock) nature of tufa would seem to be responsible for its utility to rock gardeners. It can hold
large amounts of air or water, like a sponge. Anybody lifting a large piece of tufa quickly learns to do it when it is dry, when the tufa is significantly less heavy. Then you can make quite a macho display, lifting surprisingly large chunks of tufa. I weighed a fully dry piece of tufa of modest size at 2.82 kg. Then, as a simple experiment, I soaked it overnight in a bucket of water. Taken out and weighed after it no longer dripped water produced a weight of 3.31 kg. So this little piece of moist tufa held almost half a kg. of water – roughly 15% by weight! So clearly, tufa has a large capacity for holding both air and water. Not only that, but with its fine porosity, a piece of tufa sitting on moist soil, can wick up water to stay somewhat moist, especially if dug into a bank, but will also not become waterlogged, even sitting in wet soil. Used properly, it can thus achieve that seemingly contradictory (at least in parts of the Great Lakes region) prescription for growing many of the plants we love – “moist but well drained.” Given that tufa wicks up water from the soil – which then may cool the rock through evaporation, tufa may also help with that other oxymoronic prescription for siting plants one often reads in rock gardening books written by people who have never gardened in the Great Lakes region – “sunny but cool.” And, beyond all that, tufa is soft enough that plants will easily root directly into the rock, and many plants seed readily onto tufa. 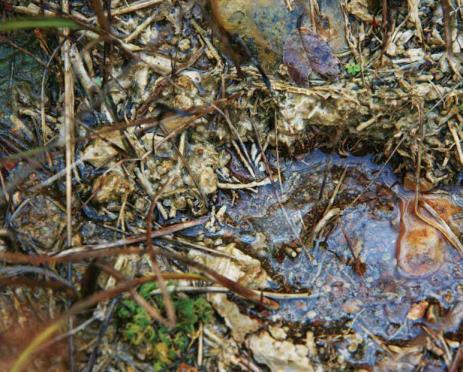