Skip to main content
Some Rock Garden Subjects from Arizona

Southern Arizona has two growing seasons: spring and late summer and autumn and, if we have a dry winter, which has happened the last three years, the spring season doesn’t amount to much. The summer rains start in July and continue till September. But in between these two seasons is the main dry season starting in mid-May and many days the temperature will rise above 100 degrees.

My earlier attempts at gardening in Arizona were unsuccessful and now I don’t garden at all; although now I know so much more about the flora and might have a better chance.

Throughout the more than 40 years we have been in Arizona, we have been learning the plants. We keep notes of their times of flowering and, most importantly, their times of being in seed. I can think of some plants that I haven’t seen in flower for years, just in seed.

While gardening in Arizona can have severe difficulties attached to it, by growing the native mountain plants, we hope that people who live in climates that are more conducive to gardening will be able to grow them. All the plants mentioned in this article grow above 4000 feet in elevation in Arizona so should be hardy, but most could benefit from extra watering in cultivation.

Townsendia exscapa grows from 4500-7000 feet in Arizona. Although it can be found from Canada to Mexico, I have never found a large patch of it. The leaves appear in late winter. “Exscapa” means “without a stem” and what stem there is is hidden by the flowers so it seems as if the flowers sit on the ground. Its common name is Easter daisy. After flowering the seedheads form puff-balls which are quite attractive; then the plants die down through the summer.

Aquilegia desertorum is found at 7000-8000 feet. I think it is misnamed as it blooms among rocks in coniferous forests and is not a desert plant. The flowers are slightly smaller than those of A. triternata and the leaves are biternate. It is only found in central Arizona.

Aquilegia triternata grows from 4000-10000 feet and has a wider distribution - from western Colorado to New Mexico.

Spring flowering bulbs need November rains to get them started. Calochortus kennedyi blooms in late March and April at 5000 feet or lower. At this elevation they may may not receive any summer rain, but the bulbs can take it as long as it rains the next November.

Fritillaria atropurpurea, like Calocochortus kennedyi, blooms in spring. Its habitat is pine-oak woodland from 5500–8000 feet. It is still possible to collect seeds in June, when the temperature is 100F.

Milla biflora does not come up every year. It needs a good rainy season. It lives in grass amongst pinyon, juniper, and oak from 4000–7000 feet. In spite of the specific name “biflora”, I have seen as many as five flowers per stem. It grows near the border and in Mexico.

Lilium parryi starts into bloom in late June at the hottest driest time of the year, but it lives at over 7000 feet. I drove over the base of the Huachuca mountains, on June 23, 1970, then took the dirt road that goes over Carr Canyon and had to hike down to the lilies. I hoped this wouldn’t be too difficult for my four-year-old. It wasn’t. Later I returned for seed. The lily produced a large quantity. I scattered some beside a creek at various elevations in the Chiricahua mountains. Thirteen years later four plants flowered. Then, there was a flash flood which demolished them. Lilium parryi is more common in California.

Arizona Flora (Kearney and Peebles) lists 37 species of evening primrose. Oenothera neomexicana is one of the white ones. Travelling up the Swift Trail, the road up Mt. Graham, in the early morning in August at 8500 feet, round the last bend before the road levels out at 9000 feet, one can see a patch of Oenothera neomexicana in bloom. It is white, fading to pink. Descending later on in the day, the flowers are over and there is little sign of them. Early morning primrose would be an appropriate name.

Nemastylis tenuis grows amongst grass at 6000 feet in the lower parts of the forest. It is really a Mexican plant which just crosses over into Arizona.

Iris missouriensis var. arizonica (opposite) is more robust and prettier in southern Arizona than some examples of the species I have seen elsewhere. It blooms in late May in the Chiricahuas.

Dodecatheon ellisiae is found from 8000-10000 feet in the Pinaleño Mountains, also known as Mount Graham. Plants growing beside a creek may bloom in late June whereas plants growing in the coniferous woodland bloom a month later. It has thin rounded leaves and white petals.

Primula rusbyi grows among rocks in coniferous forests from 7500–10,000 feet in the Catalinas and other mountain ranges in southern Arizona and in New Mexico and blooms in the summer rainy season.

Gentianella detonsa subsp. elegans flowers in meadows at 9000 feet in the Piñalenos and some other southern Arizona mountains.

Gentiana parryi used to be common in the meadows of the White Mountains at 8000-9000 feet, but recently I have not found so many, Cows? I don’t think they could eat so many. It is probably due to one of our many droughts.

Arizona has a very extensive list of penstemons with 38 species. Penstemon stenophyllus grows in the Huachuca and Patagonia mountains and in Mexico at about 5000 feet. It is one of the taller species and has purplish-blue flowers.

Penstemon ambiguus is small with pink or white flowers and blooms in open areas. It is quite common on the Navajo Reservation and can also be found south of Interstate 10 east of Deming, New Mexico.

Salvia henryi is from the Chiricahuas and does well on limestone. It blooms in both the spring and summer rainy seasons, provided there is enough moisture.

Salvia lemmonii grows from 6000-8000 feet. It flowers in July and August, growing in several mountain ranges in Pima and Cochise counties. Most have flowers that are lavender pink, but in the Santa Ritas the flowers are reddish crimson.

I hope that this selection of pictures taken from our slide library which we have built over 40 years or more gives you some taste of what the southern Arizona mountains offer to the rock gardener. 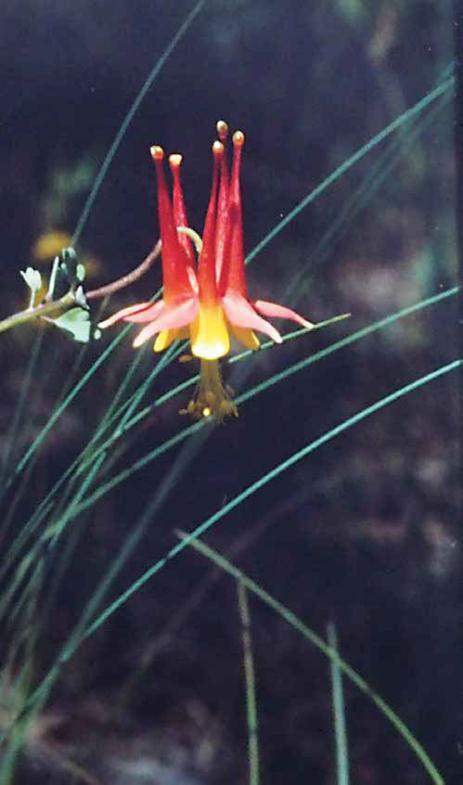