In the Great Lakes region, “trillium” mostly means Trillium grandiflorum, by far the most abundant species in the region, arguably the showiest of all trilliums, and the state wildflower for Ohio and provincial flower of Ontario. My first experiences with trillium came early; my grandfather was an avid gardener, even in later years when he became a snowbird. On his return trips from Florida, he would search for trilliums, especially variants and hybrids. When our family would visit his garden in the springtime, I noticed in the midst of very thick stands of trilliums two double forms of T. grandiflorum, one with green flowers and one with white. I would later learn my grandfather had not purchased these, but in fact found the green double himself, probably in the 1960s, so I assumed I could find them as well.

With that information, I decided to go hunting for Trillium mutations myself. Against the odds, I discovered four fully-double white-flowered Trillium grandiflorum in a small but very thick stand of plants in a small woodlot in Bay County, Michigan. I also found plants with multiple sets of leaves in Saginaw County. These plants had on average at least 24 leaves, some with petioles of different lengths, some with space between whorls of leaves, and some with no space, the leaves all in one group making them look like a large double flower. Unlike the common variants with all parts in sets of four (or rarely more), these had normal flowers with three sepals and three petals.

But between a lack of good public woodlots and an increasing deer population reducing plant numbers, I needed to find new locations
to hunt for plants. I tried looking for plants in places Fred Case had suggested, but with little success. But in 1989, I went on a brook trout fishing trip with a friend in the northern Lower Peninsula, and ended up getting lost in pursuit of a state camping area. We finally just pitched our tent at the end of a short, two-track road. The next morning, I was impressed by the large number of Trillium plants in the woods, despite it being August.

So next spring, I returned to the area. This area of Michigan turned out to be notable for having a lot of forests with vast numbers of Trillium grandiflorum, so there were many areas to explore and many plants to examine over the years. And T. grandiflorum is especially variable in features like the size of the plant and the size and shape of petals. In terms of the color of normal petals, these northern plants are all white, but more variation occurs in southern Michigan with good pinks, though nothing as deep as the lovely plant illustrated on the dust jacket of Fred and Roberta Case’s book Trilliums.

But I was looking for bolder variation. And I almost immediately found a plant with six petals. On closer examination, I realized that the sepals had become petal-like. This mutation, would, in later years, be found in mass at a different locality, with a lot of variation in the plants. Some of the plants were striking – appearing to have six full-sized white petals. Others had six white parts, but with the outer ones still being the size and shape of sepals. Many, however, had the outer whorl partly white and partly green. Unlike trilliums with 4 or 5 sets of parts, which appear to be developmental not genetic variation and “revert,” these variants are largely stable from year to year. These plants all have normal reproductive organs, and if you grow seeds derived from self-pollinating them, at least one fourth of the plants are like the mother plant. So the large numbers of these plants in some woods is easily explained – and it may mean that these striking plants could be reproduced more efficiently than doubles, which are sterile and must be reproduced vegetatively.

Rarely, the reverse condition occurs: plants with green, sepal-like petals in addition to more or less normal sepals. These are not especially attractive, and the petals are shorter and wider than normal, with the stamens and ovary present, but appearing somewhat deformed. Though these deformities are not like those seen in plants infected with the Trillium phytoplasma disease, they may nevertheless be pathological.

On this first trip spring trip, I also found two double green-flowered plants, very much like my grandfather’s. Over the years, I would
find these green doubles in a number of locations and in different circumstances, some being a single plant and nothing more, some in areas where I had also found fully-double white-flowered forms, and others where there would be a number of green doubles with more being found in the same area in later years. The petals of these plants vary greatly in shape, color, and texture, but rarely in size. They tend to be about the length of sepals, but usually are slightly wider. An oddity I’ve always seen in the plants is that they have a double set of apparently normal sepals.

The color and texture of the petals made me suspect that these plants had somehow descended from plants that were infected with phytoplasma. Such infected plants may have the petals green and more leaf-like in size and texture, and the reproductive organs would also be converted to leaf-like parts – appearing like a double flower from a distance, though with “petals” more like the texture and thickness of the ovary of the plant. At some point, I discussed these plants with Fred Case and was surprised to find out that he suspected the same might be true of double white-flowered forms of Trillium grandiflorum. However, these plants are vigorous, stable, and do not decline or show any progression of the phytoplasma disease, nor do they show the petioled leaves typical of diseased plants. Possibly, as with those singles where the petals are green and sepal-like, some other disease agent is present, perhaps a virus, as with the modifications found in some horticultural forms of tulips.

Woodlots where doubles are found are typically ones where Trillium grandiflorum occurs in vast numbers. However, sites where doubles have been found do tend to have more doubles show up sporadically over many years. So there evidently is some tendency to produce doubles in some populations. Some of these doubles, in cultivation, would go back and forth from year to year from fully double to having somewhat fewer petals, but with reproductive organs – perhaps dependent on vigor.

Where the double whites occurred in Bay County, I eventually removed all the plants in an area 10 foot by 12 foot where the 4 doubles were found. The landowners were putting up no hunting signs and the deer population in the area was exploding, decimating the plants except where I had protected some by arranging dead branches over them. Then in 1997, six plants from this group each had a small piece of petal growing on one stamen on each plant. Though these plants never did this again, seeds grown from these plants tend to produce about 5% of double offspring. There would seem to be recessive tendencies for doubling in plants that appear normal.

White doubles are the showiest and most sought after of all Trillium grandiflorum forms. Over the years, I have found quite a number in a number of different woodlots. Many of the plants either had twisted or crumpled petals – interesting, but not necessarily attractive in the traditional sense. As a rule, fully double flowers have 30–36 petals, though some plants have fewer, as few as 15. My best-looking find tends to have only 24 petals, but this allows the petals to be “stacked” and the flower to have a geometrically pleasing form. Most of the doubles raised from seed are of the camellia-flowered form with medium-width petals with no ripples on the sides, and curving backwards as the flower ages. One find has very round petals almost as wide as they are long. Of real interest are extremely thin-petaled plants found by Fred Case, many of which have a twist to the petals which can cause the flower to spiral in one direction or another. Of the variations found in flowers, the most beautiful aspect is the very geometric folds found on the edges of some petals. The plant that has been widely sold commercially, the “Smith” or “New York” double, has this trait, as have many of the largest-flowered plants found by Fred Case, and also my best looking double with 24 petals. For reasons I don’t understand, these flowers remain forward facing, with no tendency for the petals to bend backwards with age. Over the years, it is also clear that some doubles stay as single stems for long periods, but others are good clumpers. The first good white double I found in 1991 is a vigorous clump former and I now have over 70 divisions.

One question that does come up is what is it about these localized northern Michigan woodlots that allows such
large numbers of Trillium grandiflora to exist, when woodlots in southern Michigan have been decimated by deer. I’ve concluded that the lack of standing water in the area and deep winter snows probably keep the deer population lower. Also, limestone gravel in the soil helps it stay close to neutral, which T. grandiflorum prefers. Selective cutting of larger hardwood trees helps more light to reach the forest floor, which also, in the long run, may favor trilliums.

Finally, because gardeners are always interested in the unusual, it is worth briefly commenting on the Trillium phytoplasma disease that so severely affects some populations of T. grandiflorum – though fortunately not yet the large populations that have produced doubles. Initial symptoms of the disease are petals that are more or less normal – sometimes somewhat enlarged – but with a prominent green stripe down the middle. Each of the three leaves is also distinctly petiolate. As the disease progresses, the female reproductive organs tend to quickly become sterile, but even though the stamens can change greatly in size and shape, they tend to continue to produce pollen. Badly infected plants are severely distorted, with long-petioled, more or less basal leaves and distorted green flowers, lacking any reproductive parts. An illustration of this can be found in Fred and Roberta Case’s book (plate 2).

Phytoplasma (a group of bacteria) are probably spread by leafhoppers, planthoppers, and aphids, which feed on the phloem tissues of infected plants. While some trilliums in the early stages of disease may look striking, with the green striped petals, it is probably not a good idea to grow them. Research is currently being undertaken to establish the nature of the threats to wild populations of T. grandiflorum from phytoplasm infection. 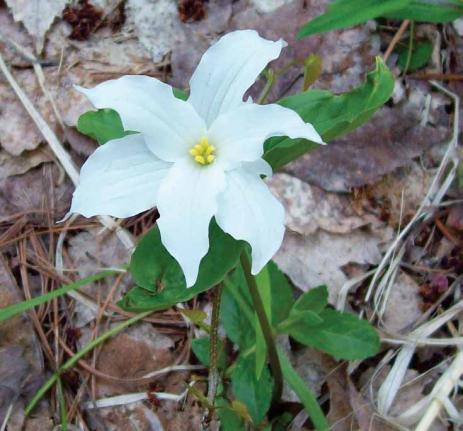