Skip to main content
Rocks on the Roof: Gardens Grow Skyward in Denver and Paris

IN 2017, COLORADO’S capital city, Denver, joined a growing list of cities, including San Francisco, New York, Paris, and London, requiring green roofs on all new construction of more than 25,000 square feet (2300 m2). Green roof gardens already exist and have proven themselves. But rock gardens on roofs? Where there is a will, the materials, and the methods, there is a way. These two rooftop rock gardens in opposite hemispheres are proving that rocks, plants, and roofs can be compatible companions.

Denver Botanic Gardens has long been known for pushing the envelope of horticulture at altitude, so it’s not surprising that it is at the forefront of rooftop gardening. The Mordecai Children’s Garden, approximately half of which fits on the roof of DBG’s parking garage, was developed in 2010 and is, by far, the largest roof garden in Colorado.

Walking with the garden’s curator, Michael Guidi, on an August day reveals an amazing diversity of plants, microclimates, and structures. There are features seen in typical rock gardens, including stone troughs, cobble beds, sandy dunes, and crevice structures composed of rhyolite. The garden’s designers specified the pounds-per- square-foot ratings for each planting area, which allow for a variety of structures, while a Styrofoam-like substructure supports from 2 to 18 inches (5 to 45 cm) below the growing media.

“A 2- to 3-inch (5 – 7.6 cm) layer of media can only support succulent plants and the like,” said Guidi. “As the layer of soil deepens to 6 inches (15 cm) or so, herbaceous plants can survive. Then, when we are able to get to a 12-inch (30 cm) soil depth, we can start planting woody material and a much wider array of herbaceous plants.” The growing media is typically composed of 80 percent expanded shale, 15 to 18 percent compost, and a small amount of zeolite.

Guidi relies on the creation of microclimates to diversify the garden’s plant vistas. Even a small tree, shrub or rocky outcropping can create a shelter in which more delicate plants can thrive. There have been some surprises in the development of the Mordecai roof garden and of a smaller, more experimental one atop DBG’s café. “Some of our penstemons have been growing for 8 or 9 years!” he said, “While some of the erigerons have only given us 2 to 3 years.” Pointing to a stand of scarlet gilia (Ipomopsis aggregata), he added, “reseeding has sometimes been a bit too successful.”

Plants in the Mordecai roof garden receive no fertilizer. Why? Because, among its many purposes, the garden serves as a giant water filter. DBG and Denver’s water department monitor the runoff from the garden and are seeing impressive results. A retention pond downslope from the roof area collects the filtered water and has been incorporated into the garden, with water-loving plants and habitat for animals and insects.

Children of all ages visit and delight in the Mordecai Children’s Garden. It’s a delight, too, for the horticulturalists who work and study there. A living laboratory, the garden points the way skyward to a boom in living rooftops.

A rooftop herb garden, outdoor kitchen, restaurant, patios, and plantings crown the reconstructed Molitor Hotel in the chic 16th arrondissement of Paris, not far from the Eiffel Tower. Its historic 1930s pool was popular with celebrities such as Johnny Weissmuller and was the birthplace of the bikini. Now, a reconstructed hotel surrounds the pool, with two stories added and additional framework to support a roof garden including rocks and trees.


Tufa is extensively used as a growing medium, hosting a bricolage of plantings ranging from tiny sedums to towering grasses and flowering trees. Seating areas are reached by a patchwork of tidy gravel pathways. The aromatic herbs and plants and the warm rocks add fragrance to the air as waving grasses hush traffic noise with their susurrations. The garden holds its own, diverting guests’ attention from the stunning views of the City of Light.

Paris was one of the first cities to propose a green roofs law in 2015. These mandates are now under attack and other options are being proposed, such as solar or white-painted roofs. However, green roofs such as the Denver Botanic Gardens and the Molitor Hotel predate the legislation and prove that garden rooftops, even rock garden rooftops, are not only possible but practical and make a valuable impact on urban environments. 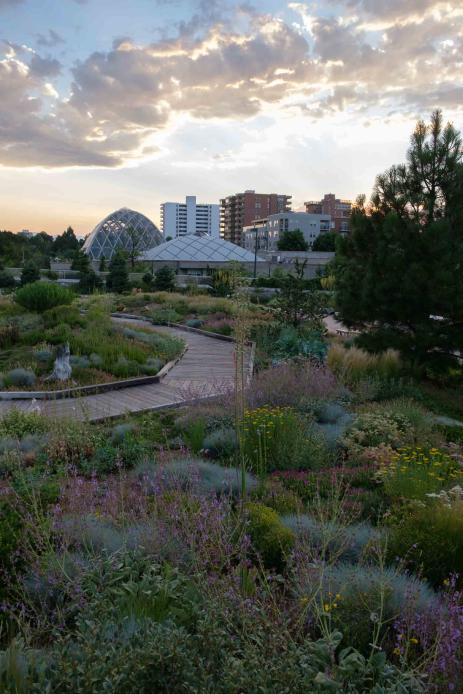