AFTER ABOUT THIRTY years of trying, it looks like I have been able to establish some astragalus in a trough. This may not be a big deal to you, with your yard-wide mats of astragalus everywhere in the garden, but for me, here, it is definitely something.

Of course, I have grown astragalus in the past. Astragalus tridactylicus was here for years, as were some Turkish ones like A. aureus and A. creticus (not to mention cool relatives like Ebenus depressa and E. laguroides), but now they aren’t, and since I had some seed left over from previous sowings I thought I would try one more time, but this time do something very different.

My usual means of attempting to get more astragalus is to sow the seed in pots, outdoors, in late autumn or early winter so that the cold would work its magic on the seed coat and there would be tiny little astragali in the seed pots come April. This method works quite well and thanks to it I can rattle off a list of species of Astragalus, Ebenus, Lupinus, Oxytropis and other members of the pea family which I have grown in the garden. But not for very long.

I have a theory that these peas dislike being transplanted more than anything else in the world, and even when carefully grown in pots, the fine root hairs can be damaged in some way which may not lead to death after the first year, but will in the second or third year, just when everything seems wonderful.

The reason I have this theory is that every single Astragalus, Oxytropis, etc.,which I planted from pots has been dead for years.

Apparently planting like this works for other people.  Claude A. Barr even said, “As small plants, before roots have become woody, they [astragalus] are usually amenable to transplanting.” This was of course written in the days when you could pull over to the side of the road a hundred miles from nowhere, get a shovel out of the back of your Model A, dig up a few astragalus, and nobody would say anything. Still, it seems like bragging to me.

Naturally, newly-planted astragalus need attention in the garden; things like watering and shooing away whatever bugs like to snack on young astragalus leaves, and then watering again. I wanted to try a different way.

Seeds of all members of the pea family are ridiculously easy to germinate simply by nicking the seed coat and soaking the seed in water overnight.  Even forty-year-old seed of Astragalus aretioides will germinate within twenty-four hours using this method. It can take even less time than that.

So I started germinating the astragalus using the nick-and-soak method, then growing the little seedlings in pots, and planting out the seedlings when they had formed true leaves. All of the seedlings died. It then occurred to me that maybe the seedlings would be healthier and less prone to dying if they were handled as little as possible, and so I tried planting germinated seed directly into the trough, “after all danger of frost had passed” (i.e., in July).

It was almost as if the seeds had germinated right there in the trough; there was nothing between the roots and the soil in the trough to cause trouble, and the roots were off to a great start growing the way they wanted to.

The method, which, since I developed it, I was going to call “the super-genius method of planting astragalus,” even though that sounded a bit immodest, goes like this:

Nick the seed. There are plenty of ways to do this. My method involves using a very sharp knife quite possibly too close to my face, but that was before I got glasses which enabled me to see an astragalus seed sitting on the table. The only thing that needs to be done is making a nick in the seed coat to allow water to enter. Some seed coats are harder than others and may require extra ingenuity, and there are some weird astragalus relatives from Central Asia which have a seed coat around a seed coat, just to fool you, but ultimately all that is necessary is some kind of crack in the coat. When water enters, the seed will start to germinate.

Plant the seed. Once the root has emerged, the seed can be planted. What I did was make a little hole, similar to the ones antlions make, gently lay the seed on the slope of the hole (I used tweezers, holding the seed, not the root), and then covering the seed. It didn’t seem to matter whether or not the cotyledons had emerged, or even if they had and were buried just a little too deeply.

I watered the seedlings once, during one of the driest summers we’ve had in the last decade, and now I have astragalus. Hopefully, they will be aware of the amount of agony, suffering, despair, and sheer brain-power involved in getting them established, and live for more than a few years. 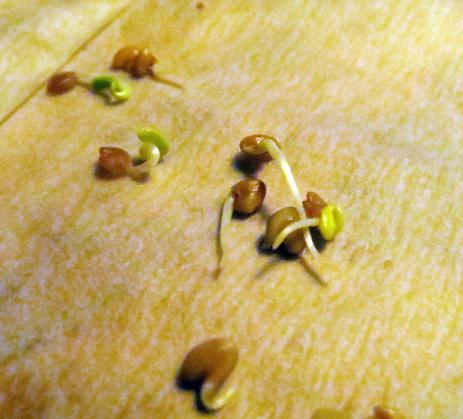