Skip to main content
Notocactus: Gems in a Historical Genus

IN THE EARLY days of cactus taxonomy few cacti were yet discovered, precious little was known about them, and there were just a few described genera in which to place any newly discovered species. Thus many species were at first placed in the genus Echinocactus established by Link & Otto in 1827. (Link & Otto, 1827, Echinocactus, Negotiations of the Association for promotion of Horticulture in the Royal Prussian States, Volume 3: 420-432). As more plants were discovered and more was learned about them, here and there species were gathered into groups. Sometimes the taxonomists proceeded with caution and created subgenera within Echinocactus. Eventually, these subgenera were given status as genera in their own right. This was the path for Notocactus, made a subgenus in 1898 by Karl Moritz Schumann, (Karl Moritz Schumann, 1898, Gesamtbeschreibung der Kakteen, p.379) then raised to genus by Alberto Vojtěch Frič in 1928. (Tony Mace, 1975, Notocactus)  By recent taxonomic treatment, the notocacti are to be placed in the genus Parodia. However, you will find many nurseries still recognize Notocactus, which in fact will save you a good bit of trouble. For truth be told, the notocacti are almost embarrassingly easy to grow whereas the other species of Parodia are difficult at best, even in a greenhouse.

The notocacti are native to southern South America, essentially Rio Grande du Sol, Brazil, Uruguay, and Argentina. The hardier types (10ºF, -12ºC) occur in southern Uruguay, and in the Argentine provinces of Córdoba and San Luis.

In his 1975 book, Notocactus Tony Mace provided information about the usual climate and soil conditions for the notocacti, which goes a long way to explain their ease of culture. He observed that notocacti prefer an acidic or at most neutral soil (pH 5 to 7) and occur in places where “the average rainfall is quite high, between 20 and 40 inches per annum, and there is usually only a very short dry season.” This is not too different from the Piedmont and Triassic Basin of North Carolina. Tony Mace also reported that the notocacti “are found growing…frequently on well-drained rocky outcrops,” either in cracks where soil had accumulated or in shallow soil upon the rock. Given at least 4 hours of full sun, a more or less south-facing exposure, and good garden soil that does not hang wet, I have found the following Notocacti to be a lead pipe cinch.

I present to you a few cold hardy (10F, -12C) species of the historical genus Notocactus.

Notocactus concinnus (synonym: N. apricus): This is the hardiest and smallest species from this historical genus, and was first described by Charles Lemaire from a plant in the personal garden, le Desert de Retz, of Monsieur Monville, who resided just west of Paris, France. (Charles Antoine Lemmaire, 1839, L’Horticulteur Universel 1:222) Of course, no cactus is native to France. Lemmaire reported that Monville's specimen originated from Montevideo, Uruguay. Field collection number HU295 probably represents a recollection from the type habitat of Notocactus concinnus at Punta Ballena, Uruguay. (Mace, Tony, 1975, Notocactus) My plant was a kind gift from Tony Avent of Plant Delights Nursery. The spines of Notocactus concinnus are very nearly friendly. Each biscuit-shaped (an American biscuit not an English biscuit – as good as they both are) plant may reach about 3 inches (7.6 cm) in diameter. This species is self-fertile, and in a happy position in the landscape, it will surround itself with seedlings, giving the appearance that it makes prolific offsets. Tony Avent has grown many dozens of seedlings from his Notocactus concinnus. Hopefully, these are offered for sale in 2018.

Notocactus submammulosus: This is a larger plant (up to 5-inch, 12 cm diameter) with thick, sharp white spines. The healthiest, hardiest, largest, and most attractive form of this species I have had the pleasure to grow is David J. Ferguson’s seed collection DJF276 from La Paz, Córdoba, Argentina. It seems as hardy as a rock and was unharmed at 7ºF (-14ºC). Unlike other plants of its species, form DJF276 often repeat blooms and sets seeds in the autumn. The autumn blossoms do not detract from the spring bloom when its top is covered in buds and a succession of yellow flowers. The seed crop has always been very good, and since I started with just the one plant, that is a sure sign of it being self-fertile. Not surprisingly, therefore, the seedlings look every bit as good as the parent. I have seedlings of another collection by Mr. Ferguson from Argentina near Achares, Córdoba (DJF235), and another collection from Sierra Lihuel Calel (Mesa Garden 1079.21). Thank you, Mr. Ferguson, and Mr. Steve Brack (now retired from Mesa Garden) for making these available.

Notocactus sellowii: Many a cactologist has fallen under the spell of Notocactus sellowii. Friedrich Sellow, a Prussian from Potsdam, was this plant’s original European discoverer. He collected it whilst exploring the natural history of southern Brazil, Uruguay, and Argentina from 1814-1831 (Kraush, H.D., 2002, Friedrich Sello, ein vessenger Pflansammier aus Postdam. Zandera 17(2): 73-76). Sellow sent his collections back to Prussia (now Germany), where his friends Johann Heinrich Friedrich Link and Christoph Friedrich Otto analyzed them. In 1827 Link & Otto published several new cactus species collected by Sellow, and named the most handsome of them for him, calling it Echinocactus sellowii (Link & Otto, 1827, Echinocactus sellowii, Negotiations of the Association for promotion of Horticulture in the Royal Prussian States, Volume 3: 425 & Tab. XXII). Link & Otto provided a true-to-life illustration of this cactus, firmly establishing its identity. Sellow did not have long to enjoy the distinction of a cactus bearing his name. Tragically, in October 1831, at age 42, Sellow drowned in Argentina’s Rio Dulce (Kraush, H.D., 2002, Friedrich Sello, ein vessenger Pflansammier aus Postdam. Zandera 17(2): 73-76). All those years ago, Argentina’s Santiago del Estero had no bridge over the Rio Dulce for a traveler’s safe crossing. Misfortune – and a river named for its sweet water – took Sellow’s life.

You may not be the first person to fall under the spell of the notocacti. Nor shall you be the last. 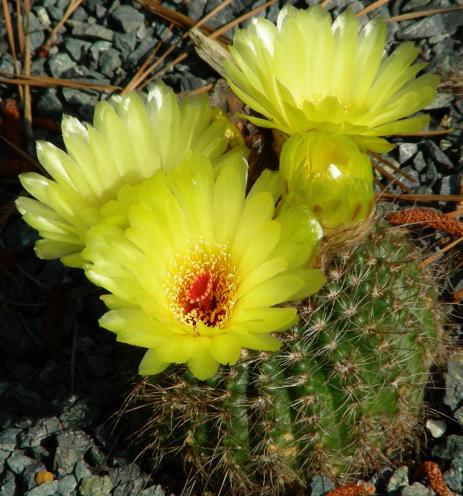