I KNOW A LOT of people make fun of the idea that plants that turn to mush in much warmer winters elsewhere can be hardy in Denver. I suspect this disbelief has its origins in entirely different experiences of winter, and maybe this semi-scientific explanation will show that our experience of winter is radically different from most other cold-winter climates.

It definitely does get cold in Denver. There is no east-west mountain range to block Arctic air from flowing southward directly toward my backyard; even distances of thousands of miles do not seem to help warm the air up much.

The coldest I’ve ever seen here is -27ºF (-33ºC). The night it got that cold I walked out into the garden, trying not to breathe much, to see what it was like. It was cold. When I brushed against some pine needles, they shattered like glass.

If you have an image of winter gardens covered in a blanket of snow, this is not an image that comes from Denver. Or if it does, it was the day before the sun came out and evaporated most of the snow. Every now and then we do have winters where the snow lingers for days or weeks on end, but those winters are rare enough that I can still maintain my sanity. The average precipitation in Denver in December and January is just half an inch each month.

Unlike “back east,” where, when I visited in winter, the sun was said to be somewhere in “that hazy area over there,” Denver’s sun is always there, blindingly bright, and warm even on days when the temperature is well below freezing. Snow lying on the ground sublimates, evaporating directly into the cold, dry air. Of course, a little bit melts and trickles down into my paths, making me wish I had made them out of something other than plain dirt. But most of the little bit of snow we do get leaves without wetting the soil at all.

It never rains in the winter here. Okay, every now and then a little bit of rain falls, so I can say that it rains in Denver in the winter as much as it snows in Malibu in the winter. (No one ever moves to Malibu to be closer to the slopes.)

Think about this for a minute. Something like the entire regional flora has adapted to winters during which rain never falls. The soil is either dry, under snow, or frozen. It’s true that some native species need snow cover either to prevent excessive transpiration or to endure cold temperatures (Ceanothus velutinus won’t last a winter here without the deep snow cover it finds in the mountains); those are exceptions that prove the rule.

I’ve never seen an ice storm, or sleet, or rain falling on top of snow.

Let me see if I can show the radical differences in winter climates by dragging you into my backyard. Today is the 18th of January. It’s 64 degrees outside (17.7ºC), and 9% humidity; fairly typical winter weather. There’s a little bit of snow on the ground here; the soil is frozen in much of the garden.

Almost the first thing you’ll see, if you look where I’m pointing (and yes, I know this isn’t really a rock garden, just a pile of dirt with some rocks stuck in it), is a fairly large colony of agaves (Agave parryi) growing in heavy clay soil with a bunch of Echinocereus and pupping like crazy. They’ve been growing there for a quarter of a century. I also know that growing agaves in clay isn’t the brightest idea in the world, because agaves prefer a more porous soil to allow late-summer rain to penetrate, so that they can grow bigger and bigger, but I can just blame the garden help for planting the agaves there.

Agave parryi is a mesophyte (definitely not a “xeric plant”) dependent, as I said, on relatively heavy late-summer rainfall, and which, anecdotally anyway, rots in winter-wet soils at much higher temperatures than the bone-chilling temperatures it experiences in my garden, with or without snow cover.

As Park S. Nobel suggests in Environmental Biology of Agaves and Cacti, “For O[puntia] humifusa, the lowest mortality due to low temperatures occurs at the driest sites, possibly because of the high tissue solutes under the more xeric conditions.... The lower tissue water content may lead to less water that can freeze extracellularly and therefore less ice that could damage the cells as the ice crystals eventually become large enough to disrupt the plasmalemmas.” If low soil water content equates to a higher concentration of cryoprotective sugars (the “antifreeze”), as Nobel suggested, and increased hardiness, then it seems likely that a higher soil water content would dilute the sugars to the point where the agaves become much less hardy than they are naturally.

So “hardy in Denver but not hardy for you” is a real thing. Sorry. Of course, I am deliberately ignoring the hundreds of plants which everyone else can grow but fry to a crisp in a dry Denver winter, just to look good. That is what gardening is all about, isn’t it? 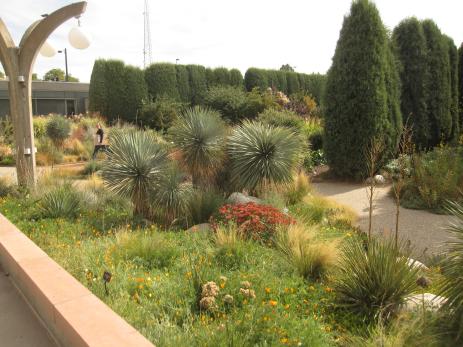