Matthaei Botanical Gardens recently opened a series of conservation-themed gardens – the Great Lakes Gardens: a collection of gardens celebrating the floral diversity of the Great Lakes region. While our region does not have towering mountains, we do have majestic sand dunes, dramatic limestone bluffs and pavement areas found around the Great Lakes, native prairies and oak openings (or oak savannas), and coniferous and deciduous forests. The intent of these new gardens is to introduce the general public to the beauty and value of these diverse ecosystems and to acquaint visitors with many of the unique plants found within the Great Lakes region.

Perhaps the garden of most interest to NARGS members is our alvar garden, simulating the distinctive limestone habitats found around several of the Great Lakes and in only a handful of other areas around the world. The name “alvar” was given to the exposed limestone habitat found in various places in Sweden. Other alvar locations are found in Estonia, England in the Pennines, and in western Ireland notably in the Burren. In North America, alvars are limited to the Great Lakes region where they harbor a number of rare and unusual plant species.

Our garden was designed to represent the alvars found in the Great Lakes Region and showcase both the typical and rare plants found in these unique places. The landscape design was created by Shannon Gibb-Randall of InSite Design Studio of Ann Arbor, and the stonework laid by Ray Rogers and his staff from Rockworks, LLC in Lake Orion.

The garden was constructed of limestone from quarries along Lake Superior, with some earlier rock from quarries near Rogers City. Stone was carefully layered to create shelves, simulating the types of limestone bluffs found along Great Lakes shorelines, as well as pavement areas with narrow joints between large limestone slabs. Artificial “grykes” were created in some of the limestone shelves, simulating the narrow fissures found in many alvar habitats and providing niches for a number of rare species. Stone was set on a soil mixture of fine gravel, sand, and with a minimum amount of organic compost. Broken concrete was also recycled as part of the garden to illustrate the similarity of limestone pavement to the often barren environments found in urban wastelands.

Our garden features many of the unique plants of alvars in the Great Lakes region such as lakeside daisy, Tetraneuris (Hymenoxys) herbacea; dwarf lake iris, Iris lacustris; and Hill’s thistle, Cirsium hillii, as well as more common plants like columbine, Aquilegia canadensis; poverty grass, Danthonia spicata; shrubby cinquefoil, Dasiphora (Potentilla) fruticosa; and creeping juniper, Juniperus horizontalis. The garden also includes a simulation of a grassland alvar with a thin layer of gravelly soil over a stone base. The soft-textured prairie dropseed (Sporobolus heterolepis) dominates the grassland alvar garden, with the delicate prairie smoke (Geum triflorum) and other forbs interspersed among the grasses.

Other garden spaces within this unique collection of conservation- themed gardens include a cobble beach with plants found along
the cobble-strewn shorelines of the Great Lakes and a dune garden, featuring the rare Pitcher’s thistle, Cirsium pitcheri, along with other unique plants of the dunes such as prickly pear cactus, Opuntia humifusa.

The gardens also include demonstration prairie plantings, an oak- openings garden, and both drier oak woodland and a floodplain woods. Gardens also include the Jean Avis Wilson Native Orchid Garden, featuring key native orchids and related species. Interspersed among the various gardens is the Herb Wagner Fern Collection recognizing his contributions to our understanding of ferns and the special places where they grow. Wagner was a celebrated faculty member at the Univerity of Michigan, widely recognized botanist, and Director of Matthaei Botanical Gardens. 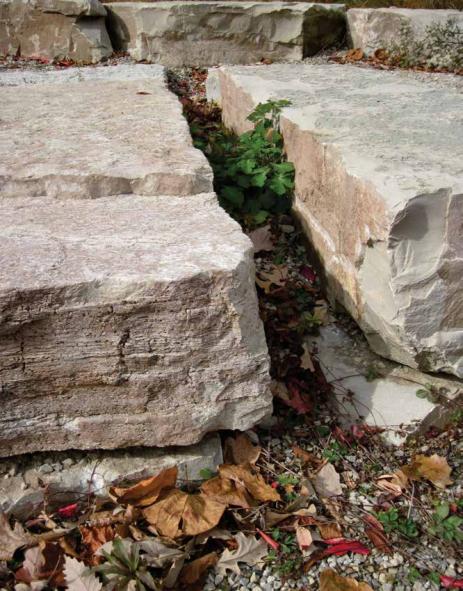