Autumn is often seen as a time when things are winding down in the garden. Apples and pears are ready to be picked and stored, along with medlars and quinces; pumpkins are ready to be carved; fallen leaves swept up, and the garden put to bed. But there are some wonderful autumn flowers: chrysanthemums spring to mind, Michaelmas daisies, autumn-flowering crocuses and colchicums, cyclamen and gentians.

Less well-known outside Japan are the increasing range of autumn- flowering saxifrages (Saxifraga section Irregulares) from far-eastern Asia where China, Korea and Japan are home to about a dozen
species of saxifrage of which Saxifraga stolonifera is the best known for most gardeners. In the autumn, however, it is Saxifraga fortunei in a multiplicity of forms, some with spectacularly complex and coloured flowers, that takes center stage and is increasingly becoming available.

These are happiest in half shade, in cool moist leafy soils. In North America, New England and the Pacific Northwest are likely to be the best places to grow them, although for the determined rock gardener little is impossible. Alternative approaches to these are taken by bonsai growers for whom these saxifrages are grown as companion plants, kusamono or shitakusa, using specialist mineral-based soils such as akadama or kyodama, rather than leafy or peat-based soils.

Over the last three years (2012-2014) the Royal Horticultural Society (RHS), based at their headquarters in Wisley, Surrey, some twenty-five miles southwest of central London, have been conducting a trial of Saxifraga fortunei cultivars. With 65 different submissions this was the largest array of these ever on display outside Japan where dai-monji-so, as they are known, are highly prized. These trials by the RHS are carried out to select good garden plants: hardy, reliable, good-flowering plants.

The panel of judges, of which I was one, met on a regular basis when the plants were in flower (in this case September to November) to judge which plants should be given the prestigious Award of Merit (AGM).
Of the 65 plants in the trial 13 were given AGMs. These represented a selection of plants recognised by the panel as outstanding. But there were at least a dozen more plants that had some excellent characteristics although they fell short in some respect or other. Some only flowered well for two years out of three, some were felt unattractive by some judges although others liked them, some were not sufficiently prolific with their flowers, or not robust enough.

Some Irregulares saxifrages flower during the summer months but the only form of Saxifraga fortunei which flowers outside the autumn is a plant that can be ascribed to the var. partita with deeply cleft leaves and white flowers in April/May. Some Japanese botanists propose this should be separated as a species: S. acerifolia. With this exception, of interest to botanists more than gardeners, the cultivars of S. fortunei come into flower from mid-September until early November. Flowering is curtailed by frosts so the choice of earlier flowering cultivars and finding a sheltered site is important if you live in an area prone to early frosts.

While Saxifraga fortunei can be found in China, as far west as Sichuan, the plants in cultivation originate in plants originally collected in Japan which has a maritime climate. Honshū, the largest island of Japan, home to most of Japan’s large cities including Tokyo, is the seventh largest island in the world (87,182 sq. miles). For comparison, Britain is ninth (80,823 sq. miles). In fact Honshu and Britain are the two largest islands in the world with a temperate climate. Nevertheless it is clear that the main area from which the garden forms of dai-monji-so are derived, in southern Honshū, has a warmer climate than does the UK. This means that Japanese cultivars, and there are around 400 in circulation in Japan, that come in to flower late are difficult to flower successfully and reliably in the UK in the open garden.

In the trial all the award-winning plants were either early-flowering starting in mid- to late September, or mid-season starting in October. No late-season cultivars, starting flowering from the beginning of November, achieved an award despite the fact that they included some very pretty cultivars, a sign that the site of the trial suffered regular frosts in early November.

In the trial plants orignated in one of three distinct ways:

1. plants collected in the wild in Japan - among the award winners are the very similar 'Mount Nachi' and 'Rokujo', taller 'Rubrifolia', and very small-leaved 'Bychan';


As with some long-dormant plant you have nurtured, it is always exciting when interest in a group of plants that have long attracted you suddenly erupts into life. Twenty years ago in Europe there were just 5 or 6 named varieties of Saxifraga fortunei in circulation – today there are around 100 of which those illustrated here are just a sample. Some of the smaller cultivars like 'Mount Nachi' and 'Bychan' can be grown on the open rock garden but it is in the shaded rock garden and on damp rocky slopes where most varieties, particularly the larger cultivars, will thrive. These are spectacular plants for the fall garden as the leaves start to fall and fruit ripens.

Now, remind me, how do I get them through Customs into North America?

Further details of the award-winning plants and the trial can be found in forthcoming articles in the RHS publications The Garden and The Plantsman. An extended article will be published in the Saxifrage Society's Saxifrage Magazine later in the autumn. 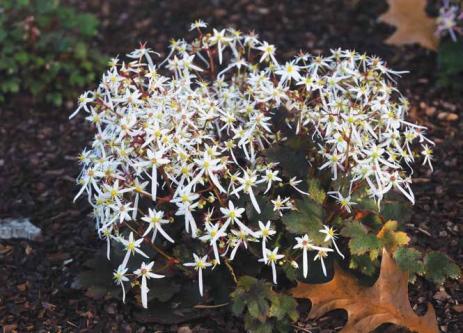