ALLEN CENTENNIAL GARDEN is a 2.5-acre jewel surrounding a historic Victorian home in the middle of the bustling University of Wisconsin campus in Madison. Garden construction began in 1989, with its main focus as a teaching garden for the Horticulture Department. Since then, it has become an oasis of beauty and serenity for the students, faculty, staff, and campus visitors who wander its paths.

A favorite spot in the garden (especially in spring and early summer), the rock garden occupies approximately 7500 square feet (700 sq m) in the southwest corner of the gardens on a north-facing slope in full sun. The garden was constructed in 1989 with over 20 tons of beautifully featured limestone, which had weathered on a local farm for over 100, years plus 8 tons of sandstone. Tom Vanderpoel, a NARGS and Wisconsin-Illinois (WI-IL) Chapter member, designed the garden and oversaw its construction. The inclusion of a rock garden was proposed by Warren (Professor Emeritus of Horticulture) and Alberta Gabelman, WI-IL Chapter NARGS members, who planted and faithfully maintained the garden for 14 years.

In 2003 Ed Glover, a long time member of NARGS and the WI-IL Chapter volunteered to guide the future work in the rock garden. About a half-dozen volunteers from the WI-IL Chapter, who have labeled themselves the "ACG Rockheads," currently maintain the garden along with a summer student intern. Usually, one WI-IL Chapter meeting a year is designated as a workday in the garden.

Two main goals of the rock garden are to show visitors a variety of methods of growing alpine rock plants here in the Midwest and to display a large variety of those plants from easy to challenging.

Since 2003 we have renovated many areas of the garden and added new features to meet these goals. The garden currently includes scree, moraine, tufa beds, a dry stream bed, a sand bed and pavement for xeric plants, a raised bed, a collection of troughs, and the most recent addition of a crevice garden. In 2006 we received a generous grant from the Singer Endowment Fund to help underwrite the tufa beds.

The Wisconsin-Illinois Chapter hosted a Study Weekend in the spring of 2017 with the rock garden at Allen Centennial being a major focus of the meeting. At the NARGS Annual Meeting in 2019, the garden received the Frank Cabot Public Rock Garden Award. 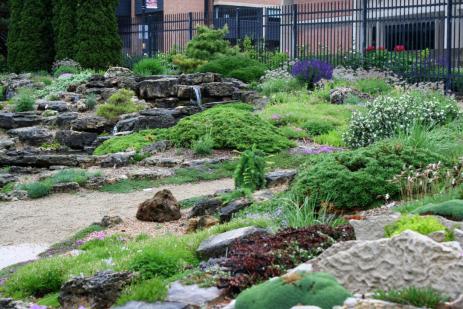