Packera werneriifolia is evergreen, or so it appears after one winter, anyway:

A kind of rock plant from my garden today. 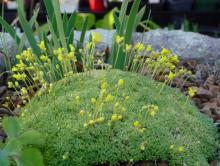 Erigeron compositus seeded into some sempervivum.  Echinocereus coccineus in the background, Sedum dasycarpum to the left. 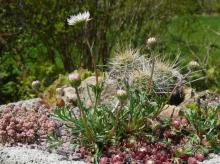 I would never purposely have the regular Sedum acre in my garden, but the variegated form is less vigorous and quite pretty.  This piece found a home in a pot last season that had a blooming Campanula(Symphyandra) wanneri in it.
(It's a bad pic, I know, but you get the idea...) 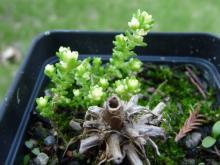 Things are mostly still back in the "just emerging" stage in my cold yard... It's fun to crawl around the rock gardens and see what's coming up though!
Telesonix jamesii v. heucheriformis; Eremostachys speciosa; Paraquilegia grandiflora; Cheiranthus roseus: 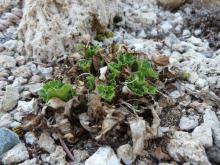 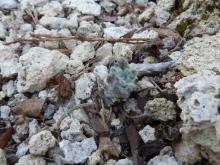 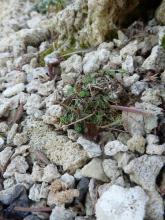 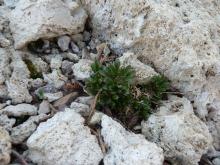 Draba sp.; Eritrichium pauciflorum ssp. sajanense (x2) were crammed into little crevices in the tufa as seedlings and seem to have adapted: 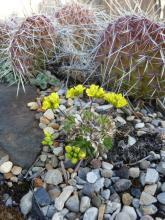 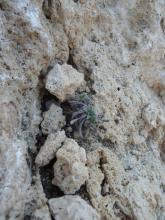 Lori, your cold yard is still weeks ahead of me  ;D

I showed this Waldheimia tomentosa (Holubec seed, and the pic he shows on his sight is just as not tomentose as this) somewhere else on the forum, but this is a slightly clearer shot, excessively close (its only about an inch tall right now, just emerging) to show the cute little succulent leaves- almost like fat little hands! I will be tickled pink if this flowers this year! I'd also love to get seed so I could have more than the nervous making 1 baby....lol

Looks like great promise there Cohan. The foliage is fascinating - hope you get good flowering later on.

Lori, how do you keep those zillions of plants straight?
Kudos to your mind like a steel trap, and/or photographic memory.

Or, are you removing the tags for the photo shoots? ;D

Looks like great promise there Cohan. The foliage is fascinating - hope you get good flowering later on.

Thanks, Tim! In Holubec's image, it looks like not a tight plant, but still small, I think; I've planted this single in a bed that has mostly semps, so I think the contrast in form will be good, assuming it survives longer term...

As for non-labelled plants, I think Lori uses maps? I have wondered a bit about the logistics of that- do you do a new sketch or labelled photo at the time of planting?

Lori, how do you keep those zillions of plants straight?
Kudos to your mind like a steel trap, and/or photographic memory.

Gee, I wish!!
Yes, as Cohan hinted, my rock garden explorations are accompanied by much peering at and mumbling over plant maps, which I update as I plant new things... or realize that something has died out.  I have been doing these on photos lately, as the shape of individual rocks always helps to locate particular plants.

Cute little plant, there, Cohan!  I think I struck out with Waldheimia seeds this year. Lori - the plant looks great and the setting looks so right! More and more I am convinced that we need to create an area of tufa garden but I don't think it would ever be so natural looking.

I do the same as you in recording plantings around the garden - that is digital photographs annotated by hand on printouts. I used maps from very early on in the garden, but it is very much easier to locate plants in photographs and memory only works so far. Even better is to have a kind visitor who also knows the plants and can jog the memory!

Lori- the Waldheimia was  a single germination out of it's batch, but it has proved tough since then!

The Thlaspi is very nice- my first flower of the year on the acreage was a Thlaspi- but not nearly as choice as yours  ;D ( I think Thlaspi, not always paying enough attention to distinguish some of the other common white flowered weedy cresses)

Hieracium villosum in bud.  Yes, that is dirt in the folds of the leaves... Cute and fuzzy :) I have some seed in of a couple Hieracium.. hoping for good things without efforts at world domination  ;D 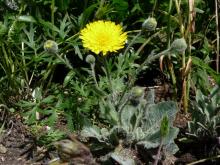 Cute little thing :) I have some seedlings up of a couple of the Hieraciums and relatives I sowed; I'm just hoping they don't flower at this time of year- when so much of the countryside and my yard is yellow, yellow flowers in the garden are much less appreciated!