What do you see on your garden walks?

Scutellaria nana var. sapphirina wanders from its home, it doesn't spread. It leaves its original location for better pastures.

Well, that sounds better than, say, "rampantly invasive"... Okay, I'll leave it where it is for now, though it will be interesting to see how far it has to go to find better pastures in my little plant gulag.   ;D

Yeah, works for me but I wonder if short people would agree?  ???  :D  Nice to see some of your garden, Rick.

And:4) Eryngium alpinum5) DH's mislabelled rose, that could not have been further from what it was supposed to have been... but sort of appealing.6) In DH's greenhouse ponds, Nymphaea 'Madame Ganna Walska'7) Nymphaea 'Helvola'8 ) Azorella trifurcata, or so it seems from the yellow umbels (vs. greenish-white, apparently, on Bolax gummifera?)9) Another Inula rhizocephala 10 ) Just a garden shot 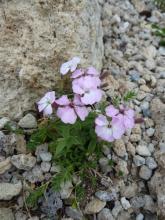 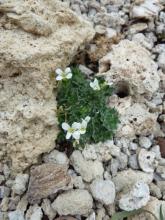 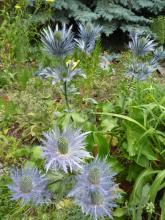 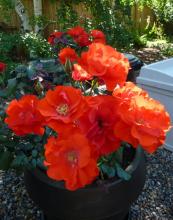 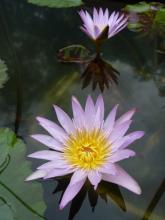 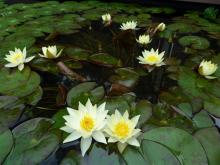 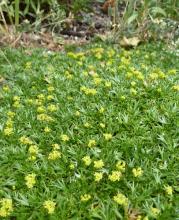 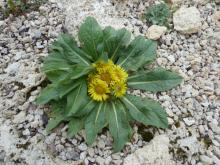 Campanula americana.  Just ending bloom to the right is Digitalis ferruginea.[/quoteI didn't notice this post while I commented the Impatiens pictures! Both the Allium and the Campanula are new to me. Are the C. americana perennial? Seems to be plants to try here.

Really enjoyed the pix of your garden, Lori: you have created a stunner there! Love to visit it some time...

Lori, do you ever have the heart to leave your garden except for short walks in the mountains?

Lori. your garden is beautiful, and you grow such interesting plants.

Trond, Campanula americana is a biennial, and in many (if not most) gardens a notorious self seeder.  I try not to allow to much seed production.  Most people don't think of it as garden worthy, I don't think. I have found that the plants can be susceptible to a wilt disease.  I know verticillium is present in my land, so I assume it is that.

Allium stellatum is quite vigorous, and also a vigorous self seeder too, but it is easily prevented but cutting the stalks.  The bicolor umbels, with white buds opening to lavender remind me of fireworks.

Thank you for the compliments!  The great thing about photos and posting to remote sites like this, is that no one sees the really ratty parts of the garden.  ;D ;D

And, making another appeal... I'm posting all this stuff, not strictly for compliment-fishing (although I must say that that is very nice  ;D ;D), as in the hopes of encouraging other, so-far silent, members to feel free to share a running journal of their alpines, and gardens in general.  I'm sure we'd all love to see what grows in different areas, and conditions, at different times through the season... (Hey, I need some ideas, too, for my future plantings!)

Arrived home after 5 weeks vaccation. Met by a real wilderness. Have to mow and cut my way through the woodland.These are not the worst:The creeping Acaena ovalifolia have grown 3-4ft and cover the path.Alstroemeria aurea have gotten 3 ft tall and fall over and block the path. 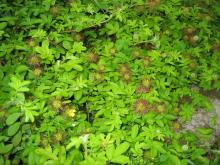 The burs are fortunately soft to trample on even with bare feet. And yes, the Alstroemeria aurea is a a hardy perennial here spreading slowly with underground rhizomes.