Plant of the Month for October 2010 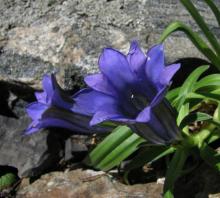 This species was first collected by George Forrest in 1906. He collected it on the Li-chiang Range, northwest Yunnan, where it was growing in meadows dominated by calcareous rock. Here, they grew at an elevation of 11,000-13,000 feet (about 4000m). However, this species is also found in southern Gansu, southern Qinghai and northern Sichuan, growing at an elevation of 3000-4200m.

Plants form a basal rosette of narrow, somewhat leathery leaves. Several stems, up to 10 cm in length, are produced that end in a single, relatively large (up to 5 cm long) purple-blue flower. The throat of the flowers are striped in green. The unfringed plicae are nearly as large as the petals, giving the flowers a 10-petaled appearance. The petals may be finely dotted with greenish spots.

Full sun with an evenly moist soil is preferred. The soil should be alkaline in nature. Overall, this choice gentian is rare in cultivation.

The blooming season of G. georgei is after the trumpet types have passed but before the septemfida group commences. In southern areas, this species blooms in June but in more northern regions, blooms are throughout July and into August.

No direct seed germination requirements have been found so it would be assumed from the elevation of the plants, that a stratification period would be advised. Fall sowing outdoors may be suggested.

This species arises from a taproot making division very difficult.