Plant of the Month for October 2009 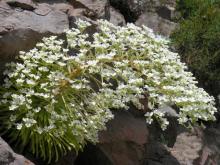 Often called the 'King of Saxifrages', Saxifraga longifolia is endemic to the Pyrenees, Mont Serrat of eastern Spain and the Atlas Mountains of north Africa. In the wild, they usually grow vertically, always on limestone cliffs. In the Pyrenees they grow up to an elevation of 2400 m while in the Atlas Mountains, they occur at 2800-3500 m. They prefer open, north-facing slopes.

This species is monocarpic. A rosette will grow for about 5 years (some upwards to 15 years) then produce a flower stem upwards to 60 cm long, forming a fountain of numerous white flowers. Alas, after the seeds are shed, the whole plant dies. In the wild, blooming rosettes average about 15 cm in diameter but in cultivation, may exceed 30 cm! These large rosettes can be stunning to say the least. The narrow, stiff, silvery leaves may reach up to 10 cm in length.

This species requires full sun in the cooler north (such as Newfoundland) but an eastern to northern exposure is preferable in warmer climates. The growing substrate should be well-drained and preferably on the alkaline side. They are not drought-tolerant so maintain evenly moist soil during the growing season. This species is hardy to at least zone 5. They make wonderful subjects for alpine troughs and pots.

Being monocarpic, this species does not produce baby rosettes around the base of the mother plant, as do most other saxifrages. Thus, seed is the only way to propagate this species. If your S. longifolia does produce smaller rosettes, then you probably have a S. longifolia hybrid instead....many exist masquerading as S. longifolia. 'Tumbling Waters' is one such hybrid that looks similar to S. longifolia yet is not monocarpic.

Collect seeds as soon as the capsules start to turn brown. In my experience, they benefit from a 6-8 week stratification period.