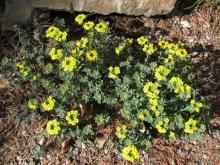 Allium zebdanense is an ornamental onion found throughout the Middle East including Israel, Syria, Palestine, Lebanon, Turkey and Jordan, extending as well into the Caucasus. It has Carex-like foliage that forms an arching mound and flower stems that reach 45 centimetres.  The somewhat nodding flowers are pristine white, in a semi-rounded umbel. It was first described in 1859 by Pierre Edmond Boissier and Friedrich Wilhelm Noe.

This Allium does well in dry shade but will also do well in full sun.  It is not fussy about soil pH doing fine in both mildly acidic and alkaline soils, but the soil must be well-drained. Plants will go dormant by early to mid-summer so interplant so you are not left with a gap. Despite being native to rather mild regions, it is hardy to at least zone 5.

Bulbs should be planted about 7-10 cm, deep, in groups of 7 or more for the best impact.

From April in the south to June in the north.

Seeds are surprisingly hard to come by as this species, at least in cultivation, does not set seed readily.

Established clumps may be dug just as they arise in spring, and divided accordingly.  Alternatively, they may be dug after they have gone dormant in mid-summer.

Alyssum wulfenianum is a low, trailing to cushion-forming plant, 15 cm tall by 30 cm wide, with small spoon-shaped, generally evergreen, grey-green leaves. Stems terminate in a dense raceme of small four-petalled yellow flowers. Flowers are so dense as to appear almost globular when they first bloom but flower stems elongate later in the flowering season.  The flowers are lightly fragrant.

This species is endemic to the Alps of the Italian-Carinthian border where is grows on limestone scree at a height of up to 1500 m.  It was named after Carinthian botanist Franz Xaver Freiherr von Wulfen.

This species needs full sun and a well-drained site.  The are not fussy as to the soil pH.  Clip after blooming to help maintain a tighter, more compact habit. Plants are deer-resistant and quite drought tolerant once established. Hardy through zone 3.

Seeds may be directly sown at 15-20 C and should germinate within a couple of weeks.

Mid-summer cuttings 3-5 cm long may be rooted in sand and kept in a lightly shaded area.