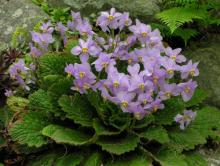 This genus contains 3 species, all confined to the mountains of southern Europe. They are members of the Gesneriad family, related to the popular African Violets. The most popular Ramonda is cultivation is R. myconi, an endemic to the Spanish Pyrenees. In the wild, plants grow on east to north facing limestone slopes, often in association with Saxifraga longifolia. In their native haunts, they bloom throughout April and May (later in June in northern NARGS members' gardens). Plants produce flat, evergreen rosettes of rather rugose, roundish leaves. Flowers are produced in small clusters (1-6) near the center of the rosettes and are commonly mauve-purple, but pink and white forms exist.

Plants grow best if grown vertically since they dislike winter wet on the crown. Avoid hot sun; in warmer regions they are best grown on a north-facing slope while in more northern localities, an east-facing slope with morning sun is fine. They will tolerate slightly acidic soil but benefit from regular dusting with lime if your region has naturally acidic soil. Soil should be gritty and very well-drained yet plants prefer soil that retains some moisture. If kept too dry, the foliage will shrivel and turn brown along the edges.

Mid to late spring but into early summer in northern areas; in the wild April and early May are the main flowering season.

Seed is extremely fine; surface sow and keep shaded with high humidity. Best to leave the seedling in a flat for a year before attempting to replant as they are very slow to attain any size.

Large, multi-rosetted plants may be divided by carefully cutting apart the rosettes.

New plants may be raised from leaf cuttings in a similar fashion to African violets.