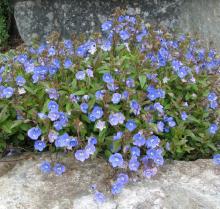 This species is more commonly known in the trade as Veronica peduncularis 'Georgia Blue' but this ID was made via a misidentified pressed specimen at KEW. In fact, the species isV. umbrosa. The real V. peduncularis has white flowers with pink veins and lacks the reddish stems of V. umbrosa. This selection is also known as 'Oxford Blue'.

Veronica umbrosa is native to alpine regions of the western Caucasus (Georgia) and was collected by Roy Lancaster in 1979. It forms a low mound 10-15 cm in height but can spread 30-45 cm in diameter. Plants produce loose spikes of cobalt-blue flowers offset by dark green, often reddish-tinted foliage. Foliage is mostly evergreen and turns glossy purple in winter.

This speedwell is suitable for full sun to part shade. Provide a well-drained soil. It does not appear to be fussy about the soil pH. Some sources claim this species is hardy to zone 4, while others say zone 6. It is deer and rabbit resistant. It is also salt and drought tolerant.

In mild climates this species can begin blooming as early as February. In northern regions, June to July is the norm.

May not come true from seed

Plants may be dug and divided after flowering