Plant of the Month for January 2010 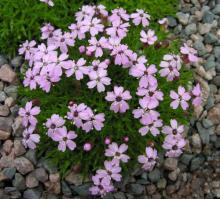 Silene acaulis or moss campion occurs throughout the holarctic regions. It is as "at home" in the high Arctic as it is atop the highest peaks of the Rockies, Alps, Carpathians or Himalayas. This tap-rooted plant forms a tight, low bun which is studded with small pink or rarely white flowers, in late-spring-early summer. When not in bloom, plant do appear very much like a clump of moss. They appear more frequently on calcareous rock than acidic.

Moss campion has the unusual habit of producing either female plants or hermaphroditic. The former have smaller flowers than the latter.

Moss campion is not easy in cultivation as they dislike hot temperatures and transplanting. Best success is in cool summer climate regions. Full sun is the norm in their natural habitats, along with well-drained, gravelly soils. In the garden try scree conditions. They perform admirably in trough culture.

In St. John's, Newfoundland, this species blooms in May to early June but in native regions of northern Newfoundland, they may bloom as late as late July or early August.

The easiest and perhaps the only way to propagate this species is by seed.

Some guides claim the seeds may be direct sown at 20 C with germination expected over the following 3 months. However, in my experience, seeds germinate better and more quickly if stratified for at least 8 weeks. Germination under cool conditions (10-15 C) will develop sturdier plants. They are best left in their pot for a year before planting out. Be very careful not to damage the taproot.

As they are tap-rooted, division is not recommended