Plant of the Month for December 2012 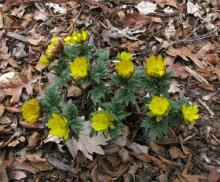 Adonis amurensis is native to northeastern Asia including NE China, Korea, Russia and Japan. In the wild, it inhabits open slopes among shrubs. Plants arise very early in spring or even late winter. Flowers are about 3 cm in diameter with purple-tinted sepals and yellow petals. Flower stems arise about 5-15 cm. Fern-like foliage does not fully expand until after flowering. Seedheads arise on stems to 30 cm. By early summer, the plants have gone dormant for the season.

There are several named forms of A. amurensis that have originated in Japan. These range in colour from orange through various shades of yellow.

This Adonis prefers soil that stays reasonably moist all year. Grow it in full sun or part shade. Growing under deciduous shrubs and trees is ideal as they will receive full spring sun but some shade later in the season. They grow best in zones 4-8.

Seed have a short viability thus should be sown as soon as they ripen. Leave pots outside for the winter as germination is increased by exposure to fluctuating temperatures.

Large plants may be dug and divided as soon as the foliage has died-down.

Not a typical form of propagation.