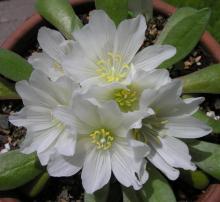 Lewisia brachycalyx is a member of the purslane family, Portulacaceae and is known by the common name short-sepal bitter-root. This species was first described by George Engelmann in 1868. It is native to the mountains of the California, Arizona, Utah and NW New Mexico, as well as Baja California, where it grows in sandy soils among seasonally moist montane meadows at an elevation of 1300-2500 m. It is a perennial herb growing from a short thick taproot. After the fall 'monsoon' rains of their native region, plants begin to send up a rosette of leaves. These will sit through the colder months and resume growth in early spring. When leaves are mature, they form a basal rosette of thick, fleshy, blunt-tipped narrow leaves up to 8 centimeters long. Flowers are solitary but produced in clusters that sit atop the leaf rosette. Each flower has 5 to 9 shiny white or pink petals about 2 centimeters long. The leaves wither and the plants go dormant shortly after flowering.

This lewisia requires gritty, well-drained soil that is moist in winter. Full sun is best. Shortly after flowering, the plant will go dormant, at which time it should be kept on the dry side, otherwise it will rot. Plants will resume growth in late summer to early fall once they are exposed to extra moisture. They are rated hardy to USDA Zone 6.

As this species grows from a taproot, division is not an option.

Being taprooted, plants do not produce stems suitable for cutting purposes.