Beautiful indeed!  It does seem slightly incongruous to see a lily up there... but my viewpoint is of only one native lily (L. philadelphicum), that tends to inhabit the mixed forest edge.

I love the pics, everyone. Now I'm dying to try some martagons. I only have a few common varieties so far.

I fully agree with your first statement. However, your second is wrong: It is not me but my lilies which are dying :'( . . not beetles but slugs.

From Korea and nearby China, this is the area where the four other Lily species (besides L. martagon) that make up the martagon section of the genus grow.  Even as species lilies, most are fairly rare in cultivation.  I have found L. distichum easy to grow, but I would venture that to most people it's not the prettiest lily around.  I only have one clone blooming, so I can't make blanket assessments of the species, but on this one, I really like the black stems, and stark white ovary.  Like L. tsingtauense, the petals possess the deepest saturation of orange, and at least on this L. distichum, the petals are even glossier. 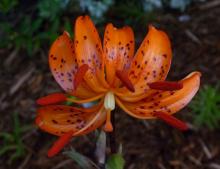 There are some that label this a separate species, L. miquelianum, but it is generally not an accepted name.  However I do use the designation for simplicity's sake, as a shorthand for the uncertain cross. 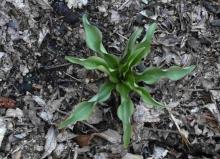 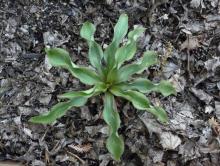 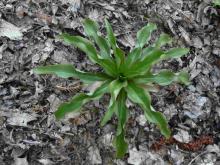 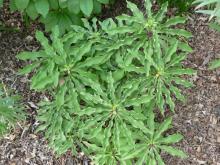 How the petals radiate seems dependent on the position relative to gravity. These are the two extremes: 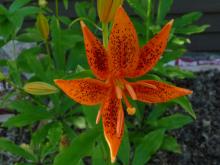 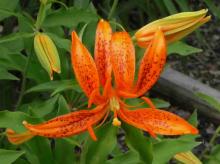 This natural hybrid has the undesirable characteristic of skipping a season of growth for whatever reason.  Last year, I thought my clump was dwindling, since it only had four stems in 2010.  When I dug them that fall, I discovered many bulbs had just taken the year off, and were as healthy as could be.  Now I have quite a few... 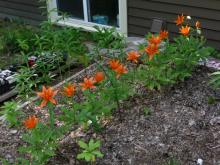 I am growing Lilium tsingtauense from scales which came from a recent importation and so I have some way to go before I see it flower. I must confess I am not at all keen on upward facing lilies but it was offered and I thought I would give it a go.

As to L. distichum I saw this at the Tatton Park Flower Show last year and it was superb,brick red outward facing perfectly formed flowers and I have now obtained what I think is hopefully a plant from China. This produced a rosette of leaves and has no died down.

You mention the hybrid skipping a season and in fact my L. gloriosoides has not put any growth above ground for three seasons. It is a beautiful healthy bulb and makes new roots each year. I am going to keep it frost free over the coming winter and see if this will bring it into growth.

Here are two pictures of my second L. poilanei in flower. I am working hard on getting seed. 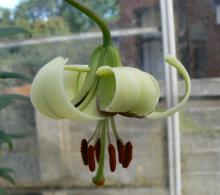 I very much enjoy your Lilium poilanei.  I wouldn't be surprised if it would be hardy for you outside, if you can keep it dry enough.  Not that you should try... I'm just sayin'.

My L. distichum does have a hint of red in it.  I will be transplanting it to a not full sun area this fall.  Perhaps then it will show deeper color.  I, too, much prefer the out and down facing flower orientation over upfacing.  But a bit of a mix is nice, especially if they are species.

You mention the hybrid skipping a season and in fact my L. gloriosoides has not put any growth above ground for three seasons. It is a beautiful healthy bulb and makes new roots each year. I am going to keep it frost free over the coming winter and see if this will bring it into growth.

This is good to know!  I have two tiny bulblets from seed (germinated this past winter) of var. gloriosoides.  I hope they don't exhibit that trait early in life...We will all be interested to see if you find the trigger for seasonal growth.  I follow everything Lilium on the SRGC forum, too.

Years ago, I received a bulb of Lilium speciosum var. gloriosoides from Chen Yi.  The bloom was the highlight of the year.  I tried to overwinter the bulb in the pot in the refrigerator, but was unsuccessful. 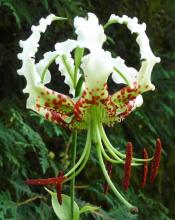 Next to flower this year is Lilium concolor.  Variety coridion consistently blooms at least a few days earlier than variety strictum for me, but there is always overlap.  Both are small flowered (3 inches) and very narrow growing plants, although strictum is even more narrow.  There can never be the excuse for "no room in the garden" for these.  They will fit anywhere, are are easy from seed, and bloom in the second year.  Red-orange is the "normal" color for the species, spotted or unspotted.  The nubs on the petal ends seem to be a trait of the species. 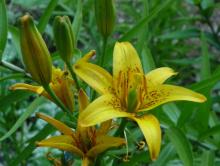 Oops, I neglected Ll. duchartrei and lankongense  :rolleyes:. They began blooming the first few days of July.  Both are similar to L. fargesii in that these species can easily bloom with small, 2-3 inch flowers or larger 4+ inch flowers, depending on the vigor and/or siting of the plant.  (My first bloom ever of L. fargesii was only one inch wide.  Now they bloom more than double that size.)

Lilium duchartrei.  When in bud, the white is almost as saturated as in the Madonna lily (L. candidum).  I have one that has a bronze/maroon coloring at the base and tips of the petals (similar to Caucasian lilies), mostly visible in bud, and two with green coloring. A couple flowering in the garden here at the moment: I have seedlings of the species, from seed collected in Russian Far East: Kedrovaja Padj.  Planted in 2009, the seeds sprouted within 15 days and seemed fairly weak, producing only one long leaf per seedling.  The 2010 season showed a few leaves per plant. But now in 2011, they have exploded in growth.  Had I known of this ensuing growth, I would have transplanted them into bigger pots!

But early in the year I was becoming very disappointed, since the stems seemed to closely resemble L. concolor var. strictum.  I figured the seed identity had gotten mixed up.  Even as tiny buds began to appear on these little plants, I was not impressed. Blooming at this size is not unusual for the concolor species.  But as the buds began to tip and take their natural pendant position, my heart was lifted.  Yes, these are in fact the real thing!

It should be noted that these pics are not very indicative of the true species habit.  Eleven of them are growing in a small 3.5 x 3.5 x 5 inch pot.  Surely, this is not normal!  That would be Stephen's photo above.  (Thanks for posting, Stephen.)