Adverse WeatherI have wanted to start this topic since spring 2011, but it seems I've not found the time, that is until now. Here I am, sitting in a cold dark house, 3rd day without power, with dim candlelight flickering, but bright Android phone screen, with small but fully capable access to nargs forum.

Our long and warm (at times hot) autumn abruptly came to an end with a Halloween surprise, the combination of leaves still on the trees and 14" heavy wet snow created the perfect storm. The damage to trees and shrubs is devastating, 15'-18' ornamental trees looked like 4'-5' snow muffins, how could a big tree possibly be inside? I didn't want to know, but as the snow started melting, it was heartbreaking to see all the shattered stems, the branches peeled off as easy as peeling a banana. For some of these trees, maybe I should just cut them off at ground level and let a strong sucker become the new start.

I don't mind the lack of power, cold house, difficulty finding anything open (such as gas stations), long gas lines... I do regret the waste from the need to throw away most food in my warmed up refrigerator and freezer, but it sickens me to see the devastation to my yard and garden. Pictures coming, once power is restored in a few days.

It is these types of setbacks that surely test a gardener.

So sorry to hear about your garden devastation....my parents in western Mass. are experiencing the same, although they have power back on. Up here in central Vermont we were very lucky, but the southern parts...not so much.

The one consolation is how well many plants are able to recover from such severe weather; or if they don't the new opportunities that arise to replant. After the 1987 'hurricane' here, certainly the most dramatic and devastating weather I have ever experienced, there was a great rush to tidy up and repair. In time though it became obvious that those woodlands that were left to themselves recovered best. It is a little different in your own backyard though!

Thanks everyone.  I know that trees will come back; I saw this first hand after our record-breaking ice storm of December 2008, where many (most trees) were heavily damaged or destroyed.  I had a Magnolia tripetala 'Petite' (it's still a BIG one in spite of its name ;)) snap off at the base in that storm, and each year I've been selecting out what I think is the strongest sucker-sprout, and each year it would eventually break off at the heal, but finally this year I have a strong sprout and the tree is already about 10-12 feet tall (I haven't even ventured down to take a look at it after this surprise early snow).

My fringe tree (Chionanthus virginicus) has been my pride and joy, planted out some 10-12 years ago as a 5-6' "whip".  Each winter it was stripped of bark at the base and girdled by rodents, but one year a sucker survived and became large enough to establish.  Carefully pruning this tree, a rather unwieldy grower but responding to pruning, it has become a beautiful specimen, and a single-trunked version (typically they're multi-stemmed). Sadly, this is one of the worst hit trees in the garden.

I'm at work (with power, still no power back at home), and here are some pics.  I wanted to do a before and after photo display, but maybe later.

Some general views of the snow... remember, just 20 days prior, I ran the Boston Half Marathon, and it broke a 45 year heat record for Boston on that date, reaching 83 F in Boston, 86 F in more inland towns, to my chagrin as it was way too hot to run a marathon yet I did... and a mere 20 days layer we get February arctic blast and early snow well before leaves drop.  No moderation whatsoever.

...after the snow melted off, bonsai version of Chionanthis virginicus. 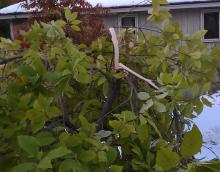 Cornus kousa 'Milky Way', it was about 16'-17' tall.  It is underplanted with hybrid Epimedium plants.

With global climate change, it looks like your climate is trending toward bad winter storms, Mark.  Not a good thing.  Minnesota is trending with long, dry falls.  The effect of the seemingly never ending La Niñas, we are told.

and each year it[Magnolia tripetala] would eventually break off at the heal, but finally this year I have a strong sprout and the tree is already about 10-12 feet tall

Adventitious buds are never strong at the point of emergence, especially at the get-go.  It grew 10-12 ft in one season? :o  I would assume a single tall whip?

Your note confirmed my worst frears, Mark. You have had a taste of Rocky Mountain weather: we have untimely snows most years (had one last week, another on the way tonight). In between the snow melts and there were crocuses still blooming...

I urge you not to cut things too quickly: we had an unbelievable spring snow in 2003 (over 4' of wet snow in March) that shattered EVERGREENS and snapped pines and spruces at the base. Few trees were spared some breakage. It was so vast, so colossal that it took weeks and months to clean up after it. It was amazing how things bounced back and plants we thought were goners today show little evidence of the damage they sustained. Nature is amazingly regenerative...

Heed that! As hard as it is to believe! And our thoughts are with you...hope you get your power back soon!

Mark, just got our power - out since Saturday.  The house was 44 degrees and without lights, heat, water, phone.  Everything back now and life is good.  Damage to trees extensive.  Pictured is Magnolia soulangeana.  It didn't bloom every year due to frrquent late, killing frosts, but made up for everything the years it did bloom. 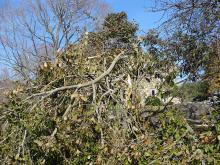 This looks too much like Denver, in September, October, March, April, or May. In the March blizzard of '03, I had a 7m tall Cupressus bakeri snap right in half, an equally tall C. arizonica laid out flat on the ground, etc., etc. The trees recovered, and so did I (sort of), but now I stay up at night knocking snow off things I don't want broken. I even set the alarm for 2 a.m. or so, and knock off the snow with a push broom, and one of those extension poles made for painting the house.

So sorry to hear about the rotten weather and all the damage, Anne and Mark.  I hope things, your prized trees, especially, will prove to be more resilient than they seem at present.

This looks too much like Denver, in September, October, March, April, or May. In the March blizzard of '03, I had a 7m tall Cupressus bakeri snap right in half, an equally tall C. arizonica laid out flat on the ground, etc., etc. The trees recovered, and so did I (sort of), but now I stay up at night knocking snow off things I don't want broken. I even set the alarm for 2 a.m. or so, and knock off the snow with a push broom, and one of those extension poles made for painting the house.

Bob, excellent idea (setting alarm, and push-broom off the snow at night), certainly worth doing.  I did this on my trees and shrubs in the monring, but then it was too late for many of them.  I'm going to do that procedure next time!

Ann, sorry to see the damage on your Magnolia, the magnolias have big leaves that catch snow/ice and have brittle wood that snaps under pressure; my pink star magnolia is a wreck, and my large M. denudata 'Forrest Pink' that got wiped out in the ice storm of Dec 2008 came back remarkable in the last three years, but suffered more damage this time around (extensive).  On the other hand, my black-leaf birch (Betula 'Black Prince'), a fastigiate tree, is incredibly flexible, the tip of the 20' tree touching the ground; I shook off the snow, and it stood back up after a day.  I should grow nothing but birch trees, they're like rubber.

Finally gave in, after 4 days of no electricity and cold in the house, my wife and I are at a hotel tonight, what luxury to have TV, lights, warmth, and internet  :)