Thanks, Maggi!  I'll keep an eye on it.  The buds are continuing to develop on Synthyris platycarpa (a rich, dark purple now - but can't post any photos to the site this evening for some reason) - hopefully, S. dissecta blooms a little later?  The first Pulsatilla patens and Hepatica nobilis are blooming now.... now if only it would stop snowing!

Maggi- it is exciting to simply see plants emerge after so many months, and more exciting yet to see recent plantings having survived :) I now have my first crocuses of the year flowering- photographed 2 on Wednesday, and I think several more opened on Thurs, but no chance for photos.. A couple of Drabas opening first tiny flowers too...

Not all good news though- one of my berms which had a number of Pulsatillas from seed starting to come along nicely seems to have been strongly occupied by voles during the long buried months, and most if not all of the Pulas seem to have been munched, along with Hieraciums and Geum coccineum... too soon to see what wil survive there- I think the species other than Pulsas may be okay, those seem likely to be largely toast- have to hope they re-seeded, as they were in flower last fall and I did not collect the seed.

On the plus side, crocuses and Cory solida  in the same area seem to have been left alone, as were Cyclamen purpurascens... and in totally different beds, first ever for me buds on Pulsatilla vernalis and patens- both from Lori's seed years ago, they should have flowered years ago, probably, but it took a long time to get them planted out!

Lori- we got several hours of rain (less than originally forecast) out of the system tuesday night- wed ended up more sunny than not... no snow in the last few days, though more chances in the forecast!

I often think that as you guys are discovering what survived the winter (and those burrowing varmints!) we are finding what has come through the summer drought and might come into flower. Just re-potting (very late, I know) some bulbs to discover pots that had a dozen or more stems last year are now empty or just one corm and lots of empty husks! What happened? I thought I kept them protected from summer rain (not that we had much) or did some critter get in?

I guess there are many reasons and occasions to lose plants...lol.. As far as disappearing bulbs, I have some of that experience indoors too...lol can't say I quite have th ehang of the SA wintergrowing bulbs yet- some I suspect I have not kept quite wet enough in growth, and then in dormancy, who knows-- too dry? not dry enough?

Snow on the ground again today (ugghh)... a return to spring is forecast for Tuesday. 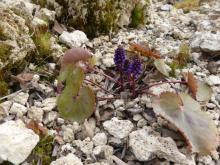 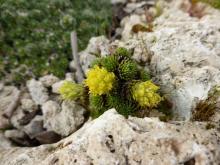 Two superb plants Lori. I had not been aware of Synthyris sp. until recently, when a friend asked if I could source some for him. He said they were wonderful plants, and now I can see why he is so keen,

. Any cultural advice for him?

Nice to see your gardens thaw, Lori and Cohan!

Synthyris is a favorite genus which I struggle to establish in my garden!

Campanula aucheri. It has survived several years but does not bloom much - 2-3 flowers at most. Still almost a foot of snow in the meadow above the bank.

My "alpine roof" has never been snow covered this winter. Only a few days with sub zero temperatures this winter and the spring started at least a month earlier than last year. Saxifraga oppositifolia is done weeks ago and another sax is on last verse as are the eariest Primulas but the auriculas are coming now. 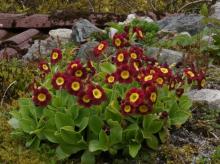 [quote=Longma]I had not been aware of Synthyris sp. until recently, when a friend asked if I could source some for him. He said they were wonderful plants, and now I can see why he is so keen,

. Any cultural advice for him?

Well, I'm afraid I don't have anything profound to say about it... I've only had Synthyris platycarpa since 2011 (one plant), and S. dissecta since 21013 (also one plant).  Having survived here at least this long, they seem to be very hardy plants that accommodate dry conditions.

They get no particular care, planted outside in the tufa garden.

It snowed all day here yesterday,but dawned bright and clear so we are snow-free again (for a while?) 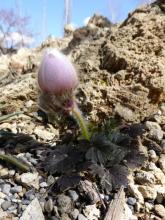 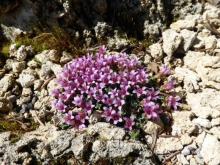 Thanks anyway Lori. One thing I can say with certainty is that they are very difficult to find here, and seed from the usual places seems to be restricted to one or two species, so maybe they are not that easy to grow for the majority of folk.