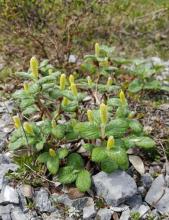 Salix vestita is commonly called the rock willow.  It is a low deciduous shrub, 10 to 150 cm tall, but generally under 60 cm.  The leaves are rounded with distinctly rugose, somewhat shiny upper surface.  The lower surface is covered in long silvery-white silky hairs.  Newly emerging leaves are bright yellow-green and hairy on the upper surface as but this is quickly lost.  Leaves darken with age but are usually brighter green than other dwarf willows. Plants are dioecious; catkins are 2-5 cm long, blooming just after the leaves emerge.

This willow is an amphiberigian species with disjunct populations in central Siberia, northern Rockies, west coast of Hudson Bay and northeastern Canadian Arctic south to Newfoundland.  It may be found along streams and open forests or montane and sub-alpine zones (up to 2400m) and along the limestone barrens of Newfoundland where it grows close to sea-level.

This willow prefers full sun and soil that stays reasonably moist.  Gravelly soil is tolerated, as is more organic.  It does have a preference for lime but is not restricted to it.  Excess summer heat is likely to be the limiting factor in cultivation.  It makes an admirable trough shrub.

In the wild, June to July but in milder areas like the Pacific Northwest, as early as April.

Fresh seed is vital.  Sow as soon as they are shed and germination will occur within two weeks.