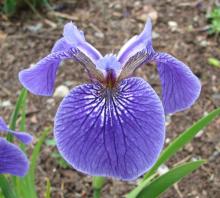 This dwarf iris is essentially endemic to the Gulf of St. Lawrence region; coastal Newfoundland, Nova Scotia, Anticosti and Magdalen Islands the north shore of Quebec and southeastern Labrador. In its native haunts, it usually grows within reach of the ocean spray. The soil is often quite acidic with a high organic content. They also inhabit coastal sand dunes. Plants are somewhat variable in size, ranging from 10-30 cm. The flowers are generally a mid-blue but rarely you may encounter lavender forms or even white.

This plant has changed names several times in the past. While originally described as I. hookeri, it was later reclassified as I. setosa ssp. canadensis. Recently it was once more segregated back to I. hookeri. Iris setosa is essentially a Eurasian species which extends into Alaska. Plants are quite tall in comparision to I. hookeri but the flower form is quite similar.

This species is hardy into USDA zone 3 maybe even colder. Provide full sun and reasonably moist, organic-rich soil that is at least slightly acidic.

In northern areas, this species begins blooming in late June and throughout July. In more southern areas, they may bloom in April or May.

Seed require at least 6 weeks of stratification to break dormancy.  Seeds sown outside in fall and overwintered outside will germinate quite freely in the spring.

In early spring are immediately after flowering, plants may be dug and divided.