Plant of the Month for December 2017 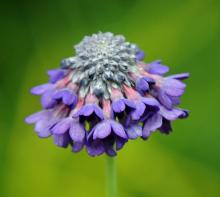 Primula capitata was originally discovered by Joseph Hooker in 1849 during an expedition to Sikkim. It was later rediscovered and introduced by Frank Ludlow and George Sherriff in the 1930's.

This plant produces a basal rosette of spoon-shaped leaves which often have a wrinkly upper surface and white-farina covered lower surface. In May to August, plants send up a leafless stem to 30 cm topped with a subglobular cluster of purple-blue flowers.  The stem and flower buds are often covered in white farina.  The cultivar 'Mooreana' has slightly larger flower heads than the species. In the wild, it grows in open spruce mountain woodlands and grassy slopes along streamsides at elevations of 2700-5000 metres.  It has a wide distributional range from NE India, through Bhutan, Sikkim and NW Yunnan.

This primrose requires consistently moist, organic-rich soil.  It can tolerate full sun in cooler climates but requires shade from the hottest part of the day in warmer regions. The plants are shallow-rooted and prone to frost heaving so a good winter mulch is recommended. It is a short-lived species. Hardy in zone 4-8 but performs better in cooler coastal climates.

From late May in warmer regions to as late as August in cooler, northern areas.

Rarely do plants become large enough to divide but if you are fortunate to have a robust plant, it can be dug and divided in early spring.