A bit of a falsehood for my first posting on this thread :) --(however i promise that my next posting will be of a trip to view alpines at sea level --then into the mountains proper).

I thought members might be interested in seeing what most of New Zealand would have looked like, before land clearance and timber harvesting reduced the size of the native podocarp forests.

These forests can still be found in some parts of the North Island------ and here at the bottom of NZ in my home province of Southland. The largest podocarp forests are on the West Coast of the South Island.

Podocarp forests are a mixture of tall podocarps and smaller trees with an understorey of shrubs, plants and ferns and soil and climate conditions play a major role in determining which species are the most dominant .

In Southland, Totara ,(up to 30 mtrs in height),grows closest to the coast, on almost pure sand. As the soil nutrient levels increase, Mataï and Rimu appear. With Kahikatea ,(up to 60mtrs in height),on the wetter sites.

Although they belong to the conifer family which reproduces using cones, podocarps spread their seeds through berries which are transported by being passed through birds. Because of the abundant range of fruits, podocarp forests also support larger communities of insects and birds such as bellbird and tui .

Our residence is situated in one of these forest ,(bush), remnants which backs onto a larger public native reserve and although we are only a couple of ks from the coast our bush has most of the large forest trees mentioned above.

The first pic is of our house surrounded by bush on all sides to give you an idea of scale.

The following pics are of the various genera of dominant trees ,various ferns –Asplenium and Blechnum sps ---–the long strap like leaves of the bush flax ,Astelia ---the stringy bark of a tree Fuchsia and finally the impressive Dicksonia,(tree ferns),all within a few metres of our back door. 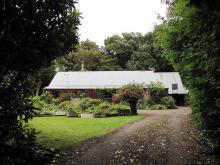 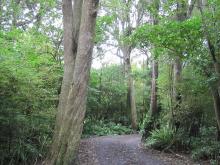 Looks like i can only post a few pics at a time (i've currently exceeded my broadband allocation and on dial up for a couple of days yet  >:(). 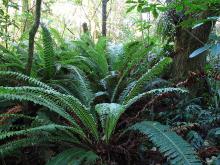 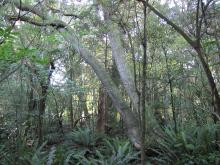 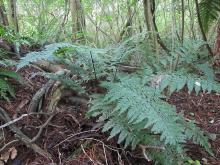 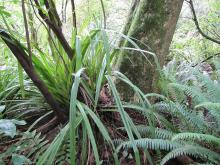 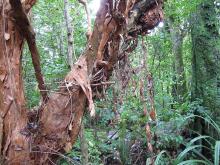 An alien (but glorious) world for many of us, Dave ... super images of a promised land.  I personally can't wait until you reach the peaks (and those glorious buttercups)!  :D

Cliff Booker A.K.A. Ranunculus
On the moors in Lancashire, U.K.
Usually wet, often windy, sometimes cold ... and that's just me!

I like forests and I have a small wood on my property as well (some small podocarps too) but your forest is strange to me. Looks more like upper forests in Amazonas  that I visited once. How easy walkable is such a forest?

I hope to visit some of the real early Ranunculus later in November and hopefully time it right a month later to photograph in bloom ,a slope with hundreds and hundreds R. haastii ,that have appeared in the last couple of years or so....... :P :P :P .

Trond
Travel is reasonable in the fern patches --the difficulty is not being able to see where you are placing your foot as the ferns can reach waist height.
Many times i have fallen flat on my face because of some hidden root  :-[

In the heavy rainful areas of Fiordland (6 metres +p.a  :o ),and the West Coast ,travel becomes very slow because of the thick vegetation and number of lianes (vines).

In those areas you need to have experience/serious skills in route finding when travelling off track ,especially since ,(introduced), deer numbers have been reduced and with it the ability to use their worn trails around natural obstacles such as gorges ,waterfalls and bluffs !!.

Dave, that kind of travel appeal to me! Seems I have to be stone old to achieve all my travel plans.

Wow, what a different and magical world - can't wait to see more!  How wonderful it must be to back onto a reserve, and to have what I imagine would be easy access to such a place.

Images from a recent trip further along the coast onto open shrubland and bogs.

Because of the harsh coastal conditions here the common tree daisy ,(Olearia arborescens),only reaches about 1 meter in height. 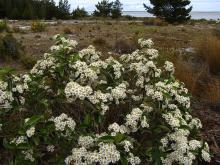 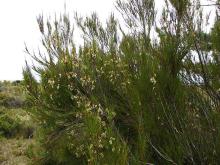 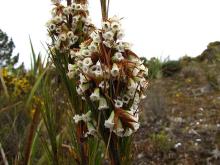 I love the look of the new seasons growth of tangle fern,(Gleichenia dicarpa). The sun orchids ,(Thelymitra pulchella), prefer sun ,however will also open their flowers on a heavily overcast warm day. Donatia novae zelandiae forms hard dark green cushions with small flowers that sit directly on the leaves and has wide distribution from coastal to subalpine areas. One of the earliest flowering Gentianella ,(G. lineata).While it isn't common ,in this area it blooms by the hundreds.