Somehow it seems wrong that no one has posted on this rather important little genus...

I don't have pictures of Eritrichium pauciflorum on this computer...I will post on that some time. It was the universal forget me not of the Mongolian mountains that grew by the thousands in all manner of turf and meadows, screes and tundra..I did get quite a bit of seed of it and shared it with some alpine nurseries. I have a fantasy it will be an easy alpine.

But for us in Denver, Eritrichium howardii is the one of choice: up by Choteau and here and there on the Great Plains of Montana (in a climate very similar to Denver) this grows thickly in the sparse grasses. Roy Davidson wrote of one locality where it was virtually the only thing growing for miles where cattle were browsing: he wondered if it was their fodder?

This clump has graced this trough for almost ten years, petering out a bit one year, and coming back the next. It has produced a finer display of bloom, but this is all I have on hand right now...so you must settle for it!

I grew two plants from seed a few years ago, and after I planted them out, they overwintered and flowered the next year, and then came 19 days of rain. They didn't survive. The next year I placed seed directly in the open garden, and this year, three years later, I have 3 rather nice little plants which have bulked up considerably but which don't show any indications of flowering yet. Having survived two winters, I'm optimistic that I'll get some flowers next summer. It's a beautiful plant and flower, and one we don't see very often here in New England.

If it's made it three years for you, it's a keeper. This is usually a Great Plains species that has to put up with great extremes (including periods of wetness). The plant in the picture has persisted over ten years for me...this is the Eritrichium for gardens: I've collected seed in the wild but never seen it in full glory. A friend in Montana just sent me pictures (it's blooming there now)...wouldn't that be fun!

I grew these from NARGS seed this year...ended up with Lindelofia longifolia!  Oh well, at least its in the same family...but really, how could a person mistake one for the other?!

I dunno, Todd... the darnedest things can happen in seed exchanges and trades!  I bought a little locally grown E. howardii at last year's alpine plant sale and it bloomed modestly in a trough this spring.

Since Panayoti mentioned it in his initial message, perhaps it's apropos to show some seedlings of Eritrichium pauciflorum ssp. sajanense, grown this spring?

The seeds were from Pavelka, and the provenance and plants described as follows:  "2000m, Sajan Mts., Russia; dwarf compact cushions, silvery-grey leaves, big blue flowers on scapes 4-10cm, stoney slopes, 2007 seed".  Germination was delayed in room temp conditions, so I chucked them in the cold room for a month, after which there was good germination.  Here are a couple of them snuggled into the new tufa bed. 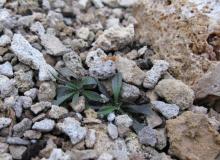 Very interesting, Lori: just realized I collected a ton of seed and shared it with several growers and need to check up on my own seedpots...

Photo taken at end of June 2012 in my garden. The seed of this Eritrichium was collected just south and east of Ima Mine, above Patterson Creek, Idaho, on cold alpine tundra in 2009. The leaf blade appears to be narrow as in E. howardii, but, from my general observation, unlike the broader blade of E. aretioides as it is found on other mountain ranges (Bighorn;Wallowa). The cushion in nature is extremely congested. There appear to be flower buds: This plant already seems preparded for winter which won't come here for another five months! The second photo of the same plant was taken earlier in the season. 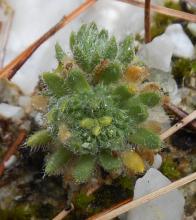 Here's Eritrichium howardii, bought from Beaver Creek this spring and (seemingly) happily ensconced in the tufa garden... so far, so good.  :D

Fine looking small cushion there, with howardii-esque looking narrow silver foliage.  I bet (and hope) you'll be showing us photos of this plant in flower next year.

I hope so too.  The one I mentioned earlier that I had in a trough has since expired...  :rolleyes: