I listened to yesterday's Science Friday edition of NPR that included Dr. Block's interview.  I thought the book would be a good Christmas present for me (from someone else).  $40 for the paperback.  We have a $20 max rule in our family, so maybe it will be a joint effort... 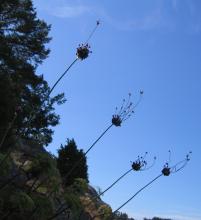 In honor of our resident Alliophile expert, the first pix I've downloaded from the last few weeks of intensive travel all over Colorado and Oregon will be some Allium! You probably have seen this miniature form of Allium geyeri from Pikes Peak and Mt. Evans (the only place I have seen it). It is sometimes classified as its own species: Allium pikeanum. I think I got some good pix that you should enjoy. These were taken about two weeks ago on Mt. Goliath (a shoulder of Mt. Evans where Denver Botanic Gardens has its Alpine unit) Typical A. geyeri gets a foot or more high and its umbels can be two inches across. This is barely a third that size in all dimensions, and perhaps even shorter. Need to remember to go back and get some seed!

Nice onions!What's the blue plant together with the alliums in the last picture?

Panayoti, when was it that I was out to Colorado for an annual NARGS (ARGS then) meeting in Boulder CO, I think it was in the mid 1980s?  At this event, one of the field trips was a bus ride up to the top of Pike's Peak, a hair raising experience to be sure. But I remember it well, excited to see dwarf (prostrate) fans of narrow foliage, that I later learned was Allium geyeri in a dwarf alpine form (syn. A. pikeanum).  It was not in flower at the time, so it's great to see your photos of flowering plants from Mt. Evans.

I did grow this in Seattle, and later in Massachusetts after moving back to New England; while it stayed smaller, growing only 6-7" tall, it was upright growing at lower elevations, and did not show any of the prostrate habit as seen up on Pike's Peak.  This form was recalcitrant and never increased, eventually dying out, whereas other forms collected in moist partly-shaded sites in my western mountain travels are easy growers, making pleasant billows of light pink urceolate flowers in late spring.  In moist sites, A. geyeri can easily reach 18" (45 cm) or more.

Back to the Pike's Peak buses. We were told that the small fleet of Pike's Peak buses dedicated to shuttling people up and down the 14,115' (4,302 m) peak, were specially designed with the wheel bases pulled in towards the center of the bus's length, thereby making it easier to turn and navigate the many switchback turns (180 degree hairpin turns).  However, what this means, is that the front portion of the bus would actually project out and over shear vertical drops at each hairpin turn, the mostly 60s and over crowd of ARGS members screaming in terror with each and every turn, like some sort of hellish amusement park ride.  The adept bus drivers, so used to the trips up and down, would also travel at what seemed like death-defying speed given the precarious terrain and dizzying heights... I think they rather enjoyed getting riders to scream. :o :o :o 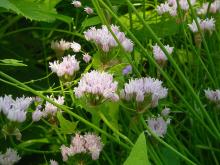 Nice onions!What's the blue plant together with the alliums in the last picture?

The blue plant is Phacelia sericea. The yellow is Geum rossii.

A few more pix of Mt. Goliath are posted at: http://www.botanicgardensblog.com/2010/07/25/quick-before-its-winter/

Thanks both, I thought of a Phacelia species.

Dear Mark!  You bring back great memories! I remember that bus ride. I also recall that Linc and Timmy Foster were on that bus and were not thrilled with the thrills (Timmy later told me she felt as if she was on a trick plane ride)...the crowning moment came when we heard Dr. William A. Weber bellowing (at the top of his lungs) "Penis! Penis! Penis!" As it turned out, he was correcting some poor soul who made the mistake of pronouncing the prevalent low altitude pine as "Pie-nuss ponderosa".  You realize that was 28 years ago! Gawd, we're going to be tiresome geezers.  Bill, incidentally, is in his nineties, and still arresting.

(Nothing to do with alliums....)Too bad I wasn't there, it might have been fun. The correct pronunciation of Pinus, for English speakers, is, of course, Pie-nuss. Botanical names are not Latin and attempts to pronounce them as such are just silly. And, in many cases, impossible.