As with much of the eastern half of the U.S., my season is running 3-4 weeks ahead of normal, and we have had the warmest March on record. The first frost predictions in weeks came April 10 with a forecasted 29F(-2C). I am usually a degree colder. Well, my thermometer read 21F(-6C) that morning, and it was quite a surprise. I had brought a few potted materials into the garage, but not many. forecasts were modified for the next night, to be the same as what was just experienced, so I did bring in a few more things, just in case it got worse, which it did by a degree.

I'll start with the Losers:

Corydalis cheilanthifolia, the day after, and three days after

Can a plant be a winner and a loser?

How about this: Xanthoceras sorbifoliaThe day after, I wasn't sure if it would recover unscathed or not. 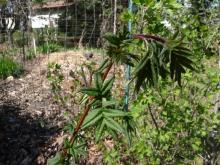 But by the third day, it was evident: foliage was toast, but flower buds unaffected! 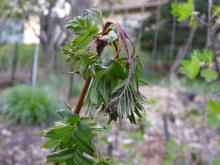 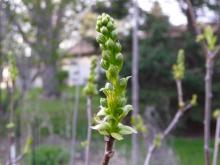 Aruncus aethusifolius. The foliage seemed so tender, I thought sure it would be a gonner, but no. 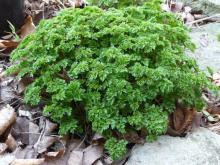 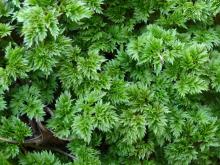 And same with Thermopsis fabacea 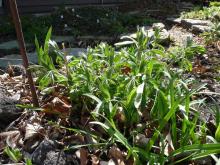 I mulch my lily beds way after the ground freezes to hold in the cold.  But this winter was so ridiculously warm, the ground froze but never really got that cold.  I mulched three weeks later than I ever have before - right after Christmas.  Still, some lilies were sprouting through the mulch already, which meant a lot more on the way.  Just three days before the freeze (and still very warm), I had the time and decided I needed to uncover and prevent over etiolation of the stems.  Mulch would remain nearby to recover before the coming hard freeze.  Well I missed a few, but even for these very succulent, blanched, and brittle exposed stems, all was okay. 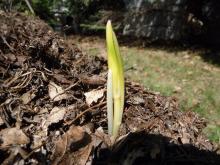 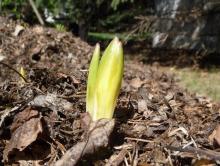 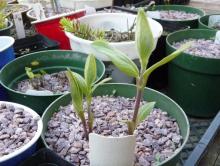 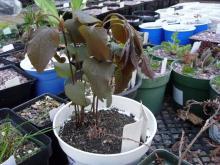 Phyteuma scheuzeri showed a tell-tale change in color (shown), but also seems to have recovered. And here are some new seedlings, except for the Cardiocrinum, all started indoors, and had I known it would get so cold, never would I have left them out.  What a sigh of relief!Cardiocrinum cathayanumSisyrhincium macrocarponPhysaria didymocarpaOxytropis campestris Interesting study, Rick.  I'm also struck by how very green the foliage looks on your Physaria didymocarpa, compared to how they appear here (in the wild (first photo) and in the garden (second photo))? 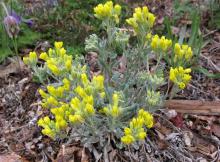 At the time I was jealous of the heat the rest of eastern and central North America experienced, but nowI'm just as glad we missed it.  Slow and steady wins the race around my area.  It has been consistently mild 10-12 C for the last week and plants are putting on slow but steady growth.  They are forecasting the temp to drop to -6 mid mext week but I hope they are wrong.  Either way, my plants will not nearly be as advanced as yours Rick.

Slow and steady here too, Todd. With the emphasis on slow!

Well Lori, maybe I should qualify those seedling identies: except for the Cardiocrinum, they are all from the NARGS seed ex, so...

Who else has winners and losers?

Sorry about the losers- hope none are total losses!While I'm sure it can and probably has happened here, I think its not common for that sort of dangerous early start to growth- I guess our deeply frozen and slow to thaw/warm soil is one factor: I planted some crocus and galanthus last fall, and even a couple of spots that have been bare for a couple of weeks or more are showing no emerging growth yet-- unless maybe they never will  :rolleyes:... the second factor probably being our cold nights- even when we were having many days to 10C or more, we had nights well below freezing, no doubt also preventing any premature growth.. I just noticed today finally a hint of action (and I mean hint) on a Saussurea and Potentilla nitida.. before that it was only Semps and weeds...lol

I know exactly what you mean, Cohan.  I have always asserted that the deep frost in the ground keeps spring bulbs from emerging early, and when they finally do it is so warm out that their bloom season is relatively short compared to warmer climes.  With our unseasonable warm winter, I was expecting a nice long show of galanthus, but I guess our simultaneous drought condition that still persist actually produced a very poor bloom.  :(

No drought here- mostly soggy! Good for the wildflowers though :)

Who else has winners and losers?

Me!All woody species have survived - only the flowers are damaged on the Rhododendrons - and the trees have not leafed out yet so they're fine but several perennials have fared worse.In addition to the cold nights in the Easter week we have had hailstorms and strong wind so it isn't always easy to say whether it is the cold nights, the wind or the hail or all taken together that has damaged the plants.

Here are two examples, Saxifraga fortuneii and Bergenia ciliata. The plants are not killed though, you can see new growth. All other Saxes and Bergenias are unscathed though. Some other plants have got their leaves burnt but are recovering. However lilies and small bulbs are OK except one broken lily stem.

And Cohan, it is very soggy here too!