What to plant on a black walnut stump....

I have a black walnut(Juglans nigra) stump. The tree was cut down six years ago. My understanding is that the juglone is no longer active one year after the tree's death. This may or may not be the case. I would have the stump ground out, except that there is a redbud in very close proximity to it. Does anyone know of any perennials, mosses, ferns or anything else that favor black walnut stumps as growing sites?

When I was a teenager, my rock garden was worked around some existing trees, one black walnut included.  I had heard the tree's allelopathic effects, but I never really saw it in evidence.  Since your tree was cut down so many years ago, I would treat it just like any other tree stump, and not be worried that the chemical effect inhibiting nearby plants might still be in effect.

Are you intending on growing some vines over the stump, or cutting out some pockets to grow some plants?  Does the stump get sun now that the foliage canopy is gone, or is there still some shade from neighboring trees, the choice of plants will certainly be influenced by that.  Also, where do you garden, the general vicinity will help with responses suitable for your climate.

What a fascinating project! I've only just discovered the 'stumpery' style of gardening. They are just adorable.

This pic is from mossacres.com

If it was in my yard in Chicagoland, and in shade, I'd cover it and around it with Woodland plants. My favorites from my own climate are; Asarum canadense, Panax quinquefolius, Aquilegia canadensis, Sanguinaria canadensis, and Dicentra cucullaria. I tend to go native.

Nice mossy stumpery in that mossacres example. From a surprise weather-front wind gust last summer that toppled over a massive 80' tall Sugar Maple in the corner of my woodland gardens, I too now have a large stump to deal with.  To see the aftermath of this tree felling, check out the Garden Adversity topic:http://nargs.org/smf/index.php?topic=807.msg18349#msg18349

Hadn't really thought about what to do with Sugar Maple stump, was going to let woodbine (Parthenocissus quinquefolia) that covers the stone walls grow over the stump, but now feel inspired to put it to better use, maybe drilling out some pockets for plants.  With the tree canopy gone, this spot now gets hot midday and afternoon sun.  I'll be thinking about it.

Sugar Maple stump after being cut back by town tree crew.  The area around the stump and to the left was filled with plants (mostly Epimedium), the area appears bare after being totally trampled by different crews of tree cutters and the garden buried in trunk and limbs for almost 3 weeks. 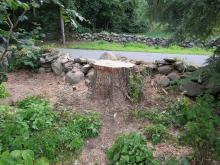 Thanks for the replies. I am a friend of Rick Rodich.....living in Mpls/St. Paul-Minnesota zone 4. I was wondering about plants that favor the growing conditions created by a rotting stump. I know of a few terrestrial orchids etc.

It is bright shade.....under a redbud.

Well John, not that this is what you are looking for (but it's interesting, just the same)...

That is interesting, Rick.....rotting wood is unique habitat. 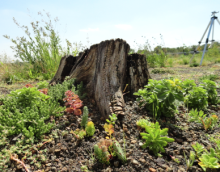 Cool!  Where's the "like" button when you need it ;D

The problem with the Sugar maple stump will surely be, that the wood is soft and quickly deteriorates.  I had some massive 18" branch portions that I used as garden features and edging, and within a few years it all but composted into nothingness.  The subject black walnut stump should be harder wood where it will last longer.