I'd like to address this to my neighbors in the country to the north of me.

It isn't even winter yet.

In addition to being (famously) polite, we are also generous...  ;-)

Uh huh. I tell stories about driving in Canada, and no one ever believes them. "Why no, kind sir, I do believe you arrived at the stop sign one millisecond before I did, and so I insist that you take your turn first, and have a nice day, as well."

There are no east-west mountain ranges (except the Uintas), and so nothing to protect me from the Arctic. Fortunately for me, the dog is getting older, and no longer wants to go on hour-long walks when it's -7C and 92 percent humidity.

I have never had the pleasure of driving in Canada but I can tell you they are very polite in South Africa too!

The drop from +17C to -23C had some negative consequences in the garden here. I don't really care, since it will make room for more plants.

The thing that I find frustrating, if that's the right word, are claims of hardiness in plants which do not grow in cold climates in their native habitat. (See my comments on delospermas.) If I were to acquire a plant I thought might be hardy, someone would say "Oh, that comes from a mountain in Mexico where it never gets cold, and so it will die in your garden", which I can accept, but then why say that plants which come from places where it never gets below -1C are hardy?

True, the drop to -23C was the first killing frost here, and it takes about three days after exposure to cold for agaves to become cold-hardy, but some survived the cold with no problem, while others did not.

First picture is of the garden in which these are grown. Second, Agave toumeyana var, bella, rated to Zone 5 or 6 but has always shown severe damage at -15C. Third. A. mckelveyana, dead as a doornail, rated to zone 6. This agave is so dead, it's dead. It couldn't be any deader.

I think drifts of Iris samariae would look better here. 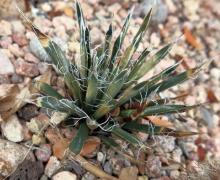 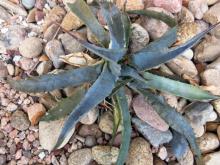 Once again, my friendly neighboring country to the north has decided to share its air with me. What did I do to deserve this?

That's what I have to go to the mountains to experience!

This is not my idea of good weather. However, everything is under a blanket of very dry snow (20cm at least), and this is usually the time of year when we experience the coldest weather, unlike parts of eastern North America where January is the coldest. I found a chart explaining that, but can't find it now.

Up here in the mountains the coldest month is usually January with a monthly mean of -10C.

The snow cover is reliable also. Today we have about 30cm of wet snow as it is +3C outside.

At home, where the ocean strongly influence the climate, the coldest month is February with a mean of +1C. February 2014 was +4.9C!

There's a lot to be said for snow cover. If you're a plant, anyway.

Every winter since the winter of 06-07 there has been snow cover here. It takes some getting used to.

(I did look at the thermometer this time ...) 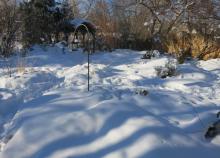 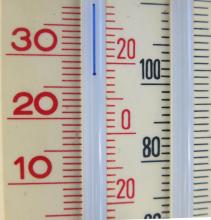 Finally. Complaining about the weather does work, sometimes. 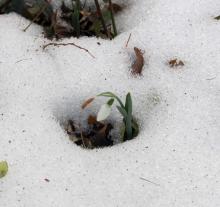