Off to a chilly start here-- we got to somewhere below -24C/-11F overnight; -18C at noon, going to -13C /8Fthis afternoon! But this is the only cold day this week- back up over night, and +7C /45F tomorrow! Rest of the week from -2 to +9! Normals are -7C day -19C night. We've been mostly above normal since early December..Still lots of snow though- in this pic from Jan 01 walk in the bush on the farm- you can see in low/open areas snow settles to nearly knee depth; in wooded places like the spruce at the rear of photo, snow ranges from nearly a foot to a few inches or less, bare around spruce trees, and spruce with sunny ground around them, can have quite large bare areas.

We have had 5-8oC the last days and nights with rain. Gloomy weather.

What about all that young growth, Cohan? Is it seedlings appearing in former grassland or is it resprouting from old roots? That kind of young saplings are excellent elk and deer food here.

All of the above, Trond, This is very typical growth here on farmland-- these wetlands are naturally forested with willow, alder,birch, and spruce and tamarack (larch)- but only some birch and the tamarack and black spruce get to any size-- willow and most of the alders will only get trunks to a few inches across at most, and when our willows get that size, they mostly fall over; However, these wetlands are prime grazing for cattle, so they are frequently cleared by bulldozer when the woody plants start to grow back, and in more heavily grazed areas, the cattle keep the woodies down, or  semi/annual burning can be used. Many places they are left for many years between clearings- this area has not been cleared in decades, except one strip down the centre where a pipleline was installed (oil and gas installations are everywhere here).The plant communities can change quite a bit over time as it becomes more overgrown with woody plants- those that need more sun are squeezed out, or remain as mostly/non-flowering plants until its cleared again! There are several species I used to see in this area as a kid that are not there anymore, or don't flower, and then some shade plants that have spread more...Also, all tamaracks were killed by a disease, I think in the 1930's, so they have grown back since then, some are getting a bit of size, and large areas of young trees....There are lots of deer in these areas, and even more so , moose.. no elk around here (except on farms), though there would have been in the not recent past. Yesterday I 'saw' two moose in this area, they came from the woods not far behind my house, and ran farther back- as I was walking along the road to start my walk. I say 'saw' because I never got a clear look at them, just saw movement and could tell by the size (huge), bits of shape (humped back), colour (black) and movement (fast and loping, not like a deer- bounding) that it was moose... I wasn't even sure about a second animal till I confirmed the second dark spot in the photos...lol 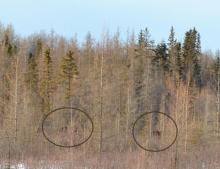 Trond, when you refer to "elk", I think you mean what we call moose (Alces alces as in Cohan's photo), no?

P.S.  It's sort of funny that it might be necessary to use latin binomials to accurately describe not only plants but also very familiar mammals.  ;)

Cohan, those are Black spruce (Picea mariana) in those photos?  They are very different from the narrow steeples that the species forms here in Minnesota.

Good catch Lori, I was forgetting about that- I just think of moose as being North American and expect elk/wapiti/ red deer for Europe (the name Red Deer- a city east of me- suggests that the North American Elk/Wapiti/Red Deer once roamed these parts, or settlers thought they did!

Rick, we have P mariana and glauca-  there could be both in the photo, since that shows the edge of the wet area.. more of the glauca are outside the really wet places, so I tend to assume they are all 'Black Spruce' P mariana in the wet places, where all the trees are much narrower and 'scragglier' than the P glauca outside the wetlands, but the P glauca surely do seed in at least around the edges and high spots within the 'sloughs'(as we locally call all wet places of any kind...lol); some of the trees do have the typical mariana profile.

'sloughs' of course cohan! Even when I lived in Ontario I persisted in calling their ponds 'sloughs', along with calling hydro bills the power bills. I guess I didn't live there long enough...About +3 C today, but windy as the dickens.  Must still be bringing in the warmer weather for tomorrow.  But we still have scarcely any snow, and as I've said, I sure wouldn't mind some.

Its a little surprising we still have a fair bit of snow, considering how many above freezing days we've had (note: we do have a larger drop overnight than people in some other climates would expect, so the snow/ground get very cold overnight, even on warm days)... most of our paths and much of the driveway still have a snow covering too--- which just gets more and more polished with every warm day!Faith- I didn't have to talk about 'sloughs' as much (pronounced 'slew' for those who don't know) living in the city, but once I left home I did have to train myself to use words like 'forest' or 'woods' instead of 'bush'..lol -- I still feel a bit pretentious using those 'literary' words for our plain old trees ;)The other one I have to watch is 'ditch' which is what we call the areas beside country roads, almost always lower than the road, and usually lower than the land on the other side, between the road and whatever comes beyond that (fields, farmyards, pasture, forest) but I presume might mean other things in other places ; the word is used for other sorts of excavations here, but always used for the roadside- as in 'He went into the ditch'(drove off the road); 'It rained so much the ditches had running water in them' etc-- and its the place I do the bulk of my backroad botanising, since everything else is private property!!

Trond, when you refer to "elk", I think you mean what we call moose (Alces alces as in Cohan's photo), no?

P.S.  It's sort of funny that it might be necessary to use latin binomials to accurately describe not only plants but also very familiar mammals.  ;)

Yes, Alces alces is called 'elk' in Europe, I frankly don't know by whom as it is called 'elg' in Norwegian and it doesn't live in Great Britain any more ;D (It is considered for reintroduction though together with lynx, bears and wolves!)

The American elk/wapiti (Cervus canadensis) is called 'hjort' in Norwegian and we have the European equivalent (Cervus elaphus) around here. Seems these are considered as separate species but moose/european elk is considered the same.

Both P mariana and glauca are commonly planted around here but the commonest is sitchensis which grows to huge dimensions :o

Ditch as besides roads is called 'grøft' in Norw. A ditch (Norw: dike) is a Small dug canal and also those dams they build in Holland.

Is 'forest' and 'woods' used of different kinds of vegetation or are they synonyms?

The thought of moose, lynx and bears being re-introduced into the UK would be immensely exciting but there are just a few too many people! There have been strong representations to introduce wolves back into Scotland but I think this would be too much for the peace of mind of farmers and gamekeepers. It is only relatively recently that many birds of prey have been increasing in numbers again. Our most exciting 'wild' mammal is wild boar which are breeding in undisturbed woodland again, but are very shy.

I have always regarded forests as very large tracts of trees. In Britain we have pretty much lost these and mostly have woodland even though certain areas are still called forest (eg: Sherwood Forest of Robin Hood fame or the New Forest in the south).

Our weather by the way is ridiculously mild by comparison to Cohan; we have hardly yet had a frost and rarely drop as low as -10°C! Snow tends to cause chaos, but is quite wonderful to see.