I created this thread for Trillium postings in 2010. Feel free to add to it. I debated whether to place it in "Woodlanders" or in "Bulbs", the later name used in the broadest sense to cover plants having underground storage structures (bulbs, corms, tubers, rhizomes) that we associate with geophytes. I believe the topic belongs here in "Bulbs".

Always the first to bloom is Trillium nivale. The first photo showing mature plants and young flowering-size seedlings taken on March 27th, 2009. The day after that photo, the plant was eaten to the ground by deer.

The second photo shows the same plant, this year flowering a week and a half earlier on 3-19-2010, but much smaller, probably weakened by having all above-ground parts eaten last year. 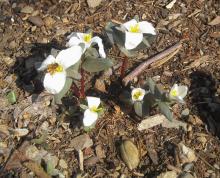 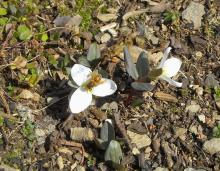 I've gotta try to get this one.  I've seen it in several gardens and it is so attractive even for its glaucous foliage.  Our problem here with early bloomers is late frost destroying them..I even have problems with grandiflorum getting blasted by our typical May frosts.

I stopped to see if the wild Trillium nivale were in bloom yet.  Just barely beginning here in Minnesota. 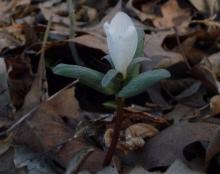 I have tried several trilliums but not nivale. I see I have to mend that. What kind of habitat is best suited for this gem?

Rick, what kind of soil and general habitat do you find Trillium nivale in?  Photos I've seen of this species show a species of consistent appearance, have you noticed much variability?  When you find it, is it abundant... what size colonies do you find?

It occurred to me that I wasn't familiar with the species range, so here is the USDA map:http://plants.usda.gov/java/profile?symbol=TRNI2The species has a "Threatened" status in Minnesota and neighboring Wisconsin, and "Endangered" status in Kentucky and Maryland.

Trond, my plants have been growing well, planted under a Magnolia tree, on a fairly steep slope (although hard to tell from the photos of my plants) in our native rocky silty clay soil amended with some decomposed pine bark mulch.  Two more photos of my plants, a couple mature flowering plants, and many 2, 3, & 4 year seedlings from seed that I harvest and scratch in around the "mother" plant.  The 2nd photo is a seedling that reached flowering size; about 5 years :o 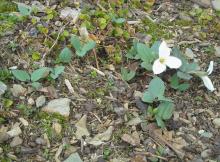 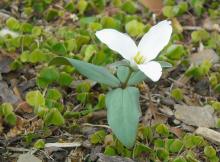 Yes, snow trilliums are rare in MN.  I know of only two spots and have been to only one.  I knew it grew in a 20 acre area of limestone outcropping, but I had to think like a snow trillium to find it.  I went almost straight to it.

This colony grows mostly on a shallow layer (4-6 inches) of humus on a jutting limestone ledge.  While the ledge is sun exposed at this time of year, it is completely enclosed in a tree canopy as spring completes.  With it grows a few hepatica, mosses.  In my opinion, here it is able to compete best with other native flora.  There is a bit of a sprinkling of plants below, but the plants are naturally of such small stature that in deeper soils they quickly become engulfed by other, later growing ephemerals.  The colony consists of maybe 100 stems, with one quarter of them that bloom.  I don't see any variability in this small sampling.  But none have such long peduncles/pedicels as in your photo immediately above.  The flowers are amazingly long lived (due to the cold weather), lasting a month to month and a half.

Closer inspection this year reveals MN snow trillium do have somewhat red stems, although not to such a degree as yours, Mark.  I suspect that if they were grow in a more vigorous fashion, as yours seem to be, they might approach your color quality.

The area is rich with Asarum canadense, Dicentra cucullaria, hepatica acutiloba, Hydrastis sp., Thalictrum thalictroides, Anemone quiquefolia, Uvularia grandiflora, Trillium cernuum, just to name a few of the top of my head.  But all those are completely domant still, and grow in the deeper and moister soil below.  The only thing growing at this time of year is a bit of aquatic watercress kind of thing, that I have never take the time to try to key.

The other Trillium nivale spot I know of is not cliff like, but a very steep slope (I am told).  One of our Chapter members grow it in her garden for more than 20 years, in a run of the mill mix high in humus.  She says it hardly increases.

Harvesting trillium seed is a matter requiring constant vigilance, and you have my respect, Mark.  Fro the first time I tried with Trillium luteum last season, and just as it ripened, one morning I found every seed stolen.  Ants (presumeably) had cut through the side of the bulging capsule and removed every seed.

I have no limestone ledge or clay soil on my property but I will create something and try to grow this nice spring flower. I am always trying to grow spring flowering plants!

Lots of Trillium coming into bloom after a couple very warm sunny days.

1    T. decumbens in two forms, one from Georgia on the left with lighter leaves and flowers, and the other from Alabama on the right, with darker foliage and flowers.

2.  T. grandiflorum - I like the undulate flowers, the white flowers looking picturesque against the dark leaves of Epimedium x youngianum 'Tamabotan'

3.  T. grandiflorum 'Multiplex' or Flore Pleno - overdue for lifting and dividing, with over 30 flowering stems this year.

4-5  T. lancifolium from Tennessee, a distinctive species with narrow leaves that angle downwards, and the very narrow maroon flowers.  It seeds around, and in the photo you can see a couple younger self-sown plants flowering.  Also seen, are T. recurvatum, T. decumbens, and T. reliquum.

6-7  T. reliquum - one of the best for foliage, here again seen in two forms.  The first photo taken yesterday, flowers not quite out, the other photo taken this morning, the flowers had opened.  I also weeded around the plant, removing Oxalis acetosella (easy) and a tiny invasive weedy veronica (grrrr), now better able to see the baby reliquum.  You may also notice foliage of T. nivale close by.

8-9  T. rugelii - just starting to open its shy flowers, another multistemmed clump overdue for division, although it seeds about too. 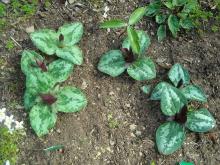 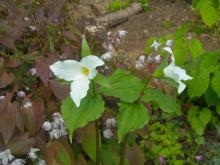 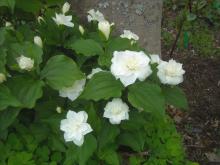 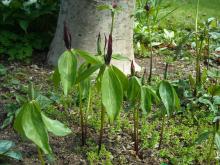 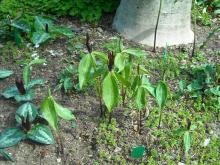 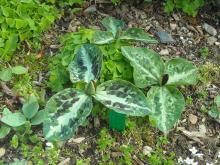 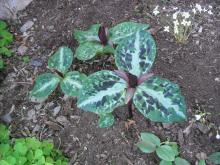 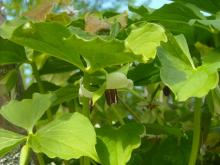 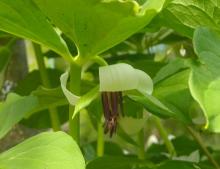 Lancifolium is an interesting species.  I like it very much.  You sure have some special trilliums, Mark (along with your entire garden!).  What is the tree they grow under?

Lancifolium is an interesting species.  I like it very much.  You sure have some special trilliums, Mark (along with your entire garden!).  What is the tree they grow under?

T. sessile looks nice... good leaf mottling, one that I do not grow and not familiar with.  The tree where my trillium are located is under Magnolia 'Forrest's Pink', once thought to be a M. denudata color form but now considered to be a hybrid with it.  It can be magnificent with huge deep purple-rose flowers that are pink-white inside, but in the infamous icestorm of December 2008, it was splintered to a shambles.  I heavily pruned it back as part of damage control, and it is coming back fairly well. Most Magnolia trees are good candidates for underplanting scenarios, as they are largely tap-rooted or deep-rooted trees.