Springtime in the Rocky Mountains

2010-2011 has been an especially snowy winter for Summit County, Colorado. Up on Peak 7, at 10,000 feet elevation, where Klaus & I live and garden at Mountain View Experimental Gardens, the snow depth is between 3 and 4.5 feet! The calendar tells us spring arrived last month but our "Green Season" won't start until late May. What do we see in our garden now? How about Snowball Bush, Snowlover, Snow-in-Summer, Snow-on-the-Mountain and Snow "Drops" (not the plant -- actual snow flakes).

To get the garden going earlier than nature's schedule, we remove the snow from the interconnecting garden paths. We leave the snow on the beds to maximize moisture content. Since the gardens are composed of a dozen raised beds of native rock construction, as the sun warms the lowest exposed rocks, the snow melts and gradually recedes, revealing the tenacity of plant life buried since November under tons of snow (but, thankfully, no ice). The first to arise are the yellow sprouts of Puschkinia libanotica (Striped Squill). They freely self-sow in the gravel paths. Striped white buds begin to show after just 3 days of exposure. Cushion Drabas are emerging with yellow showing in their buds. Arabis caucasica (Rockcress) also has a white bud. And, yes, the Snowlovers (Chionophila jamesii), now purple in leaf, are resuming growth.

Winter is far from over, however. It snowed all day yesterday and is still snowing and blowing today. It took us a week to shovel out the garden paths and then the county snowplow filled in a long section with hardpacked snow from our road, stacking it to a height of over 10 feet! We spent another 8 hours reestablishing that path before we could progress to the rest of the garden. Below are photos taken a couple of days ago. As you can see from the first photo, Mountain View Experimental Gardens is "officially" open to visitors for the 2011 season! 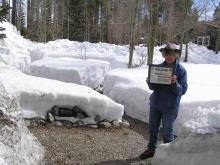 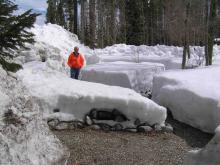 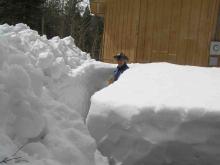 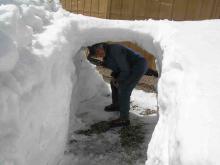 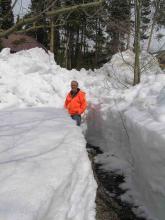 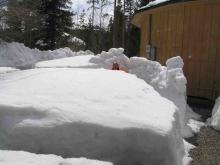 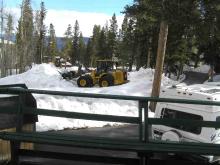 Holy Molly!! That was a lot of work! My hats off too you!!

The snow packs in the Sierras are good too this year. High elevation stations are reporting from 8 -24 feet today.

Seems you over there have got all the snow this winter. Here the ski resorts are afraid the snow won't last all the Easter ;)We are heading for our mountain cabin on Monday and reports tell that it is very little snow there. Maybe we get problems finding some to ski on :o

Yep, that's a lotta snow! I do not envy you moving all that! How extensive is the area you actually have to keep clear all winter?After the non-stop shovelling this year, I am thinking we need to try very hard to get a snow-blower for next winter, but the sort that would be really useful are rather beyond my budget...lol.. however, 5 months of shovelling ( so far) and getting firewood (okay, that's probably at least 8 months...) have me worn out! Not sure if I have anything left in me for digging gardens!!

Yep, that's a lotta snow! I do not envy you moving all that! How extensive is the area you actually have to keep clear all winter?After the non-stop shovelling this year, I am thinking we need to try very hard to get a snow-blower for next winter, but the sort that would be really useful are rather beyond my budget...lol.. however, 5 months of shovelling ( so far) and getting firewood (okay, that's probably at least 8 months...) have me worn out! Not sure if I have anything left in me for digging gardens!!

Worn out, Cohan?? I thought you had developed huge shoveling and digging muscles ;D

Worn out, Cohan?? I thought you had developed huge shoveling and digging muscles ;D

It doesn't seem so, just lots of sore tendons....lol..actually, a few days back I was shovelling wet half melted snow away from the edge of the driveway, so it would not feed the mud/puddles, and that was truly brutal.. so glad we have dry snow most of the year..

I have "huge" shoveling & digging muscles -- that is, for a gray-haired, 65-year-old gardener!  We could easily borrow our neighbor's snow thrower.  He's offered it several times.  However, Klaus likes to remove the snow from our driveway right down to the asphalt paving so the sun will melt any thin layer left behind and will also warm the driveway to aid in the melting of future increments of snow.

In the garden, which we don't open until mid-March or early April, the paths are narrow and winding.  It would be more difficult to wield a powered snow thrower through there than to shovel them by hand.  Also, I start at the the driveway in a berm of shoveled snow that's usually ten feet high.  I have to first break through that compacted berm and then the snow is a mere 4 to 5 feet deep in the rest of the garden.  No snow thrower could bust through that berm -- not even a plow blade mounted on a pickup truck!

A standard snow shovel isn't strong enough to bust through the hardpacked snow.  We each have a heavy, D-handled, flat-bladed, steel garden spade.  We started out with a traditional ice-chopper that looks like a hoe that's not bent at the end.  It didn't last through the first winter.  Of course, in the middle of a winter like ours, you can't get replacement implements like ice-choppers and even snow shovels -- all sold out!  So I grabbed gardening tools and tried each one until I settled on the flat-bladed spade.  It cuts through that hardpacked snow like a hot knife through butter!!

We have to be careful when clearing the garden paths because volunteers of desirable species like to set up camp in the gravel outside the safety of the rocked beds -- another reason why we shovel by hand.  The last reason is -- are you sitting down, Cohan? -- it's FUN!  The sky is cerulean blue, the air is crisp and cool,the only sounds are the birds singing in the trees, and hot coffee and tea are just steps away from the work site in a warm & cozy kitchen.  I get a complete workout and feel no guilt about finishing off my dinner with a bowl of chocolate ice cream!

I have "huge" shoveling & digging muscles -- that is, for a gray-haired, 65-year-old gardener!  We could easily borrow our neighbor's snow thrower.

Good for you! I have a 60m drive I clear by hand and intend to continue as long as I can - we use what we call a "snøskuffe" (snow shover) http://www.bad.no/sitefiles/site54/shop/snorydder-stor-modell-nr-9088-fiskars4.jpgDo you have these?

we use what we call a "snøskuffe" (snow shover) http://www.bad.no/sitefiles/site54/shop/snorydder-stor-modell-nr-9088-fiskars4.jpgDo you have these?

Oh, yes, that is standard equipment across the Canadian prairies!  (In the city, though, sidewalks are supposed to be cleaned down to the concrete - snow shovel work - so the big scoop is not so useful for us.)

I've seen that implement but it wouldn't work for us because even if we could push our snow across our driveway, when we would get to the edge, we would have no place to store the snow after the first storm.  The driveway would become narrower as our 8-month winter progressed.  In fact, the worst part about hand-shoveling for us is when the storage piles get so high that new snow thrown upon them rolls back down at us and hits us in the back, on the head or falls into our nicely-cleared path!  Part of the shoveling process ultimately entails carrying each shoveful up to 75 linear feet where there may still be a place to dump more snow.  And repeat.  And repeat.  And repeat.  After 6 hours of this type of shoveling, interrupted only by an hour for lunch, I not only have achieved my "aerobic exercise" quota for the week but also my "strength training" and I will have "hiked" the equivalent of several miles, albeit on level ground.

In snow years like this one, I have to climb up to the top of the 10-foot-high snow piles and cut off several feet at their tops so we can throw up more snow from forecast future snowstorms.