I don't think gardeners realize just how good Silene caroliniana ssp. wherryi is, a species native to portions of eastern USA. I have found it growing in mixed deciduous woods in fairly heavy shade. Yet as shade-tolerant Silene go, it is also low growing and floriferous. In the past I called it simply S. wherryi, but based on the Flora of North America, it is considered a subspecies of S. caroliniana, along with two other subspecies. See: http://www.efloras.org/florataxon.aspx?flora_id=1&taxon_id=242417255

And it seems, that the plant as found in Massachusetts and New Hampshire, is properly Silene caroliniana subsp. pensylvanica :-\

I would check out my plant's identity, based on calyx pubescence, but after a long 7-8 year stint in the garden, it flowered itself to death the summer of 2006, leaving nothing behind, not even a seed :'( The last photo shown is its last hurrah. 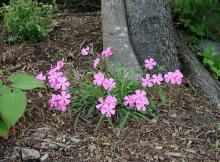 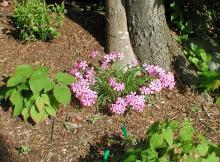 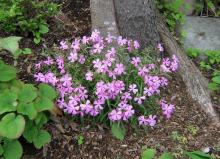 This is one I will have to watch for, being a shade plant; some of these eastern North American plants are hardier than I would expect..

Sometime in April I'll know if mine came back. I've had it since 1996, and it's generally reproduced after its inevitable 'flowering itself to death' show after about 4 or 5 years in the garden. Obviously you can come by and get one or two if they did, in fact, survive this winter.