The familiar "prairie crocus" or "pasque flower" is the harbinger of spring across the prairies, blooming more-or-less around that most unpredictable of holidays, Easter - depending on the timing of the snow melt, and in those increasingly rare places where the grasslands have not been too severely disturbed. They occur here up through the montane-to-lower alpine zone, blooming even into early July.From along the Bow River in Calgary (#1-5), and lastly, in seed, from an alpine ridge in Kananaskis Prov. Park: 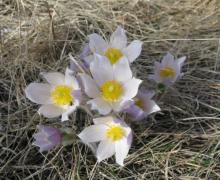 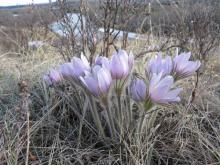 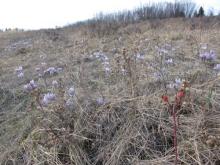 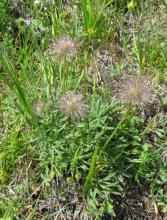 The Minnesota native ones I've seen are quite blah, color wise. A dirty white with a very slight pinky purple overtone.  How I envy everyone else's!  The only thing that blooms earlier here (sometimes) is our Trillium nivale.  Oh wait, skunk cabbage is there somewhere too.

It would be interesting to see some pix, for comparison.  It seems to me, from memory, that P. patens on the prairies east of here are more vividly and variably coloured, too.

I'd love to see your skunk cabbage too.  I've only seen it on rare spring driving trips west of the divide, e.g. Mount Revelstoke N.P. Skunk Cabbage Trail:http://www.flickr.com/photos/mary-roy/3701748988/

Funny, I don't think I have ever taken a photo of skunk cabbage.  I'll have to rectify that.  There is a good spot for them about 25 miles away, a bit downstream from Minnehaha Falls.  I remember in my youth when I came upon some in the early summer in the high hills above Duluth, MN.  The leaves were so GIANT!  I had never seen them, other than at bloom time, and I didn't figure out what they were until years after.

Pulsatilla patens grows in a few places around 50 miles from me. I have always caught them at the end of their bloom, and they just didn't seem photo-worthy.  One place they grow in abundance is particular part of the Mississippi River bottoms in pure sand.  The tract has sand that shifts around, and there are several active blowout areas.  The acreage is called the Sand Dunes SNA (Scientific and Natural Area), but I think "dunes" is stretching the meaning a bit.  It is a state protected area.

I think I have one surviving P. patens. I've been planting natives that should or could be found on my property and pulling enormous amounts of weeds. I will finally start constructing a real rock garden this year that will include western natives and whatever else strikes my fancy. I would be happy to have P. patens scattered in the natural land as well as the cultivated gardens. Unfortunately, it needs more moisture and shelter than it would see on my property naturally, so will always need auxiliary water.

Perhaps I'll get out early enough to locate P. patens this year. Where do you think it might be found at this latitude? 8000 feet? 9000 feet? Under Ponderosa pines? In the Sangre de Cristos or the Jemez Mountains? I'd love to collect seed and just scatter it about.

Heavens, Barbara! Pasqueflowers are ubiquitous. The trick is just to get out early. Most years we have some blooming in March around Denver (mine are all budding up already at home) and definitely by April. Hereabouts you can find them by the thousand and million: all the ponderosa pine woods are full of them (along with Claytonia lanceolata and Kinnikinnick) and open meadows right down to the Great Plains: there are huge stands on the piedmont mesas around Boulder that can have fifty flowers on them in sparse grass alongside cacti and yuccas!

I have seen them still blooming in mid July still on the Medicine Bow, for instance, where there is a huge stand on Snowy Pass just as you approach treeloine growing in a long, long swale with Erythronium grandiflorum and Anemone narcissiflora.

And they grow everywhere in between if you poke around early enough! Go get 'em!

It would be interesting to see some pix, for comparison.  It seems to me, from memory, that P. patens on the prairies east of here are more vividly and variably coloured, too.

I'd love to see your skunk cabbage too.  I've only seen it on rare spring driving trips west of the divide, e.g. Mount Revelstoke N.P. Skunk Cabbage Trail:http://www.flickr.com/photos/mary-roy/3701748988/

Here's my skunk cabbage! They self-sow in my little bog.

I have no Pulsatilla patens but the Norwegian equivalent P. vernalis. However no good picture! The color of vernalis is all white. I'll try to catch them this year!

PS! I got two of the same picture! How do I remove one? 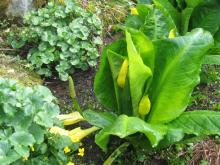 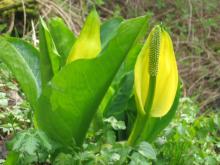 Wonderful to see those skunk cabbage, Trond!Re. removing the duplicate photo, you could do it yourself, by going in and clicking "Modify", open "Additional Options", and then just remove the check mark from the second photo... or I think I could just fix it for you and save you the trouble!

Wonderful to see those skunk cabbage, Trond!Re. removing the duplicate photo, you could do it yourself, by going in and clicking "Modify", open "Additional Options", and then just remove the check mark from the second photo... or I think I could just fix it for you and save you the trouble!

Thanks! I tried to, but I didn't see the "additional options"!

I was a bad boy today.  Instead of cleaning up the gardens, writing for our upcoming chapter newsletter or even sowing seeds, I had to get away.  I took a trip to the Weaver Dunes I previously talked about.  This has been the third warmest March for us on record, and also one of the driest.  While you'd think things would be way ahead of schedule, the lack of precipitation has slowed spring growth considerably.

I was pleased to find that the Nature Conservancy with the MN Department of Natural Resources had flash burned part of area.  I could not find any pasque flowers anywhere else (though I know they are there), but the sun's rays warmed the black surface charred by they fire, and there they were.  What a treat!  And the lack of vegetation made it so easy to photograph!  I have never found them at this early stage before.  I am always too late, and I don't think I would have much success finding them in the mid grasses where they grow when they are this small anyway.

Though I had not planned to turn myself black, laying on the charred surface to snap pictures, I was happy to "oblige."  Likewise, letting sand permeate my clothing was also a willing act.  However, the char never adhered, and the sand was so clean that at the end of the day, so was I!  I literally washed my hands with sand.  And, somehow, the sand refused to remain in my clothing, too.  That is certainly some special sand.  And I never thought I say anything like that before...The dunes are deposited from glacial river(s) after the last ice age.  The sand is up to 150 feet deep.  At least for Minnnesota, it is a very special place. 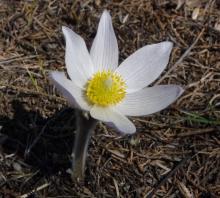 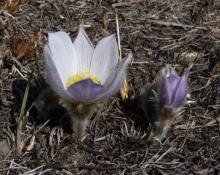