Like Panayoti, I hate to see an empty thread. Phacelia sericea is the only one of this genus I've tried....and not with success. They either rot over the winter or simply give-up the ghost mid-summer. Not sure what I'm doing wrong since in the wild, they seem to tolerate some moisture. Oh well, I alsways enjoy them in the wilds of Alberta when visiting that area. 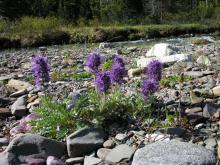 I know this genus only as green manure and nectar-producing plants for bees! This one was a new acquaintance and not a bad one.

Green manure?  Good heavens, I know some people find this one easy to grow (not me, particularly) but that puts a whole different slant on it!  :D

Here's a couple more, and a shot of the place we found them in Kananaskis Prov. Park... the big scree fan at the end of our hike.  (This photo is from before their bloom time, however... very picturesque with the bands of snow, though!) 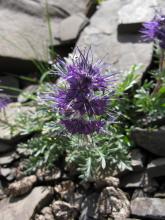 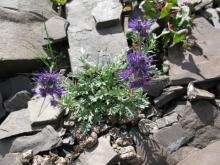 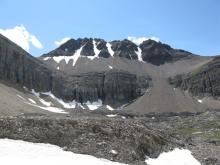 I've also failed with this plant in NW Oregon.  I've tried everything I can think of.  Last summer I had some big beautiful basal rosettes, but nothing came up this Spring.  They won't even survive in the cool greenhouse.

Well I'm delighted to say that I finally got one to overwinter.  I see a lovely clump of foliage starting to poke up on mine.  Of course, that is no guarantee as I have had good-looking plants up and die in the middle of summer.  They seem a finicky creature.

As I told higher up in this thread I know this genus only as bee plants and nitrogen fertilizer. Grow it myself but never bothered to picture it. Here's one example:http://commons.wikimedia.org/wiki/File:Phacelia_tanacetifolia_fax02.jpg

Now I have to look out for P. sericea to try it!

Phacelia sericea (Purple Fringe) is one of the most reliable native species growing in my high-altitude (10,000 feet) experimental gardens in the Colorado Rocky Mountains near Breckenridge, Colorado.  In the wild, it stands about 4 to 8 inches tall.  But in my garden, it will grow to a height of 10 to 14 inches.  It's deeply-cut, gray-green foliage indicates its drought tolerance and, indeed, it does well in my hottest, driest raised beds in full sun.  It requies no care -- no water or fertilizer -- and herbivores do not find its taste appealing.  It produces a prolific and reliable annual seed crop and willingly self-sows -- but not to the point of being a pest.  It seems to be a short-lived perennial of 3 to 4 years for any one individual plant.  However, because it reseeds so easily, there are never any gaps between the death of an old plant and the blooming of a new one. In my garden, it blooms around the end of May but in the wild, the bloom time begins at the end of June due to the deeper snowpack above 11,600 feet.  Photo #1 shows a small colony in my garden.  Photo #2 reveals details of the flowers in the tightly packed spike.

While purple is the most common color, a few years ago, I discovered a single, nearly-white specimen growing in the wild in the same general area as the purple ones -- but not in close proximity to them.  Photo #3 shows the whole plant; Photo #4 is a closeup of the flowers.  I have visited that site several times in the ensuing years but have never again seen that specimen or any new white-flowered ones. 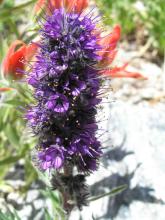 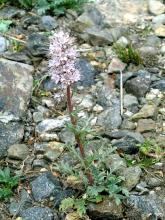 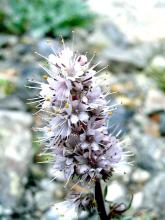 This is also one of the plants I would like to success with at my summerhouse. Although the withe is a lovely plant I would prefere the purple because the rocky outcroppings there are so lightcolored that whiteflowered plants disappear.

Jane, what is the summer temperature regime at that altitude? I guess you get much sun?

Summer is mid-July to early August.  Daytime temperatures usually are no higher than 80 degrees F. -- and that's considered a very hot day!  Usually, it's around 72 to 75 degrees F. during that 3 to 4-week period.

On either side of our "summer" is "spring" (June 15 is the last day of nighttime frost -- usually) and "fall" (a late-August frost is common but doesn't affect my cold-hardy species).  Between June 15 and about September 30, our nighttime temperatures range between about 33 and 48 degrees F. -- too cold to grow tomato plants in the open garden.  Also too cold for cucumbers, green beans, peppers, sweet corn and melons.  But lettuce, peas, cabbage, carrots, radishes, potatoes and strawberries do quite well.

In the "Green Season", we have abundant sunshine and a sky so intensely blue you have to squint to look at it.  I understand it's because of our thin atmosphere at 10,000 feet.  The sun is so strong that we saw snow melt into running water on our shed roof today -- and the ambient temperature was -1 degree below zero F!

I agree with you that the purple Phacelia sericea is more showy than the white one.  If I had seeds of the white one and if they would, indeed, produce white-flowering plants, I would put a couple of white ones in the middle of a nice clump of purple ones.  I think it would be a good conversation-starter.  What do you think?

Jane, I find your detailed notes on climate and average day/night summer temperatures both interesting and revealing.  The cool nights I believe are essential to the success and ease of many mountain and alpine plants.  When the "summer mugs" hit, as they did here this past summer (2010), with week after week of daytime temps 90-95 degrees F (with high humidity) and humid night temps that "might" dip below 80 F into the mid to upper 70s F (air-conditioner weather), plants don't get a cool relief from the daily heat and can become stressed, possibly succumbing to the topical "muggy" weather at lower elevations.

Your photos of P. sericea (I agree with Trond, the regular blue form is the best) show a plant worth every effort to try to cultivate. :DThe plants that Lori and Todd show, looks very compact and dwarf in plant size, but I suppose they might become larger under sultivation, as happened with the plants grown in your Breckenridge garden... even so, they are still delightful.

I did finally manage to grow this "in captivity" though it was short-lived, perhaps due to that unusual snow cover we had and the subsequent melt; it was a lankier plant, grown in regular soil, than the very compact ones I see in the alpine zone.Even in the mountains, some plants can be quite large, depending on conditions.  Here's a big, burly plant from fairly high elevation (2000+ m though not alpine) in Kananaskis Country (eastern slope Rockies west of here): 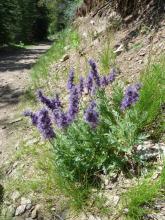 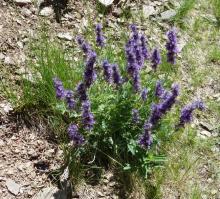 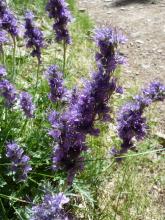