Some weird ones. First is, I guess, Opuntia basilaris var. brachyclada (doing the right thing by shriveling) and a mystery opuntia I got from Kelly Grummons which he collected near Briggsdale, Colorado.Some people have suggested this is O. arenaria, but that grows in Texas.Neither has ever flowered. 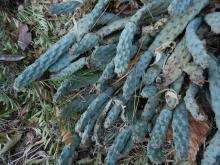 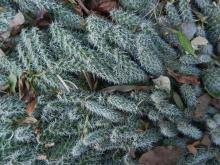 I like chollas better than tunas, at least in my garden (because they grow up instead of out) but they do get mashed by heavy, wet snow. 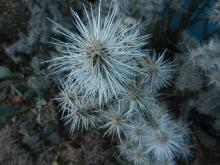 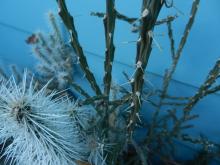 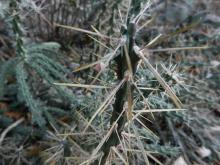 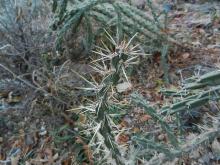 "Noli me tangere" indeed!  What an amazing variety of cacti you grow (and I sense we are only seeing a fraction of it all!)  Are you able to grow what I always think of as the cuddliest, teddy bear cholla (Cylindropuntia bigelovii), there?

Are you able to grow what I always think of as the cuddliest, teddy bear cholla (Cylindropuntia bigelovii), there?

No. I think that's hopeless. But I've never tried it.Fortunately for me (and unfortunately for my checkbook balance) I live about 20 minutes' drive from Timberline Nursery, whose owner, Kelly, is a cactus fanatic, and there's always something new there.

I don't grown any of the hybrids except for C. viridiflora the Santa Fe cholla. (a possible hybrid derived from O. imbricata  X  O. whipplei). 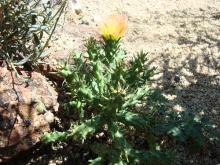 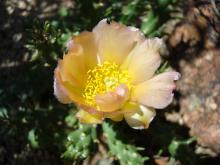 I wonder about viridiflora. The plant I got from Mesa Garden ages ago does not have pinkish flowers. They're greenish, not very interesting, more like whipplei than imbricata. It's a tall plant, too. Other plants I've gotten as viridiflora look like the one pictured. Shorter plants. Also in the garden here is regular leptocaulis (very susceptible to heavy snow), kleiniae (ditto), spinosior (susceptible to have its tips frozen), etc. You could just drive over to Timberline next summer and pick up half a dozen of Kelly's hybrid chollas. I recommend bringing about five thousand dollars so you won't be disappointed. This year he had Agave havardiana collected from three different locations. I also have several forms of the white flowered imbricata. (I hear tell of one with a purple center which I've never seen.) These are easily distinguishable from regular imbricata when out of flower. It was originally discovered near Canon City by Mary Ann Heacock. Maybe about 15 years ago I invited us over to her garden since I knew of her reputation in the cactus world. And I thought she might be lonely. (I know the feeling.) We stayed for a couple of hours.Aside from some lithops growing by the front door (outside), large clumps of ramondas growing in ordinary garden soil on the north side of the house, and a huge collection of Christmas cactus that were in an add-on greenhouse that her late husband had built for her, there were two small borders on either side of a paved walk that in the old days would have led out to an incinerator. There were crested forms of Pediocactus simpsonii, etc., all sorts of very unusual cacti, including, of course, Opuntia heacockiae. There was a lathe house at the end of the walk with an enormous Bursera microphylla and other cool tender stuff. Next to, or at the end of, the sidewalk was a short length of rails with an old rusted ore cart, which I wish I could have carried away.  I'd brought along a seed-raised Pedicocactus knowltonii (the easiest of cactus from seed), and when I handed it to her she said, "We used to call him 'Cresty' Knowlton, because he could spot a crest a mile away." (She also corresponded regularly with Claude Barr.)I came home with a bunch of treasures (one of which, a white-flowered miniature Opuntia basilaris from Mt. Whitney, eventually died, which was a big disappointment since the pads turned pink in winter); the most spectactular being the white-flowered imbricata. There was a very large plant in her garden and she took a pair of loppers and to our astonishment, cut off half of it, and gave it to me. It still lives.

WOW!! What a story. I wish I could have been a fly on the wall and watched it all unfold.

There are several imposter C. imbricata X C. Whipplei hybrids in the trade that are not stable. Take a look at this except from the New Mexico Rare Plant List sight. Note the remarks under the Habitat section.  http://nmrareplants.unm.edu/rarelist_single.php?SpeciesID=61It may be that the plant you received is one of these other hybrids.

I do grow a white imbricata it hasn't flowered for me yet, I got it from Kelly about three years ago.

I have been tracking that clone down for years.  I had a small pad two years ago but it rotted when I tried to root it.  :'(

It may be that the plant you received is one of these other hybrids.

I've seen that page, which made me wonder what's going on. Why would Standley have named it "viridiflora"? My old Mesa Garden plant definitely has green flowers, and the two others here have pink flowers like the website shows.I guess some research is in order. Benson doesn't say anything about it. I suspect that my M.G. plant is whipplei x imbricata, where the pictured plants are imbricata x whipplei.

I suspect that my M.G. plant is whipplei x imbricata, where the pictured plants are imbricata x whipplei.

That sounds like a way out of a convoluted maze to me! :rolleyes: ;) :D

Here is variety Cylindropuntia imbricata var. argentea from south western Texas. It grows as a shorter shrub with  longer stout spines than you find on var. arborescens. The blossoms are identical in these varieties. 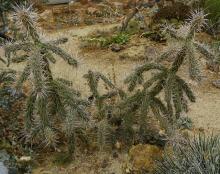 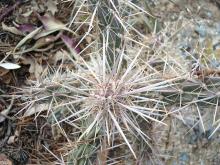 That sounds like a way out of a convoluted maze to me!

It gets worse. It wasn't Standley who described it, it was, apparently, Britton & Rose who described it from Standley's 1911 specimen. Even though it seems like there was an 1847 Fendler specimen.I don't have Britton & Rose, though it's available as a Dover reprint. I could go to the DBG library, I guess (what a library, too ...), the citation (simply "Cactaceae, 1:55") makes me think it's in volume 1.