Getting a handle on identifying Erodiums can be a challenge for the novice. They simply do not have the reference material that is available in print for Geraniums and Pelargoniums. There is a lot of information on the internet, but of course much of that is out-dated, and this is another group of plants that even the botanists can't always agree about... Some like to split up into more species and other like to lump many together, which in itself causes confusion. Common species names change, such as E. petraeum becoming E. foetidum, and then this also changes the sub-species!

A lot of the naming confusion also comes from the fact that several of the species are VERY variable in the wild, taking on a different form from mountain to mountain. There are many named varieties in the commercial trade that seem to be no more than selections of naturally occurring forms of species. It has been a pet project for a couple years to try and understand the variability of the Erodium cheilanthifolium flowers. I have put together a series of illustrations showing the main flower forms of this species.

FIG 1 shows the most common form, a basic white flower with dark blotches on the upper two petals. These blotched upper petals are a trait found in many Erodiums. With this common form there are also dark pink veins that radiate out of the blotches and also appear on the lower petals.

FIG 2 is another common form with fewer of those radiating pink veins, and in some cases the lower petals appear pure white. In many older sources I see this form often referred to as Erodium petraeum ssp crispum. Of course E. petraeum is now E. foetidum, but even so, that is a different species from E. cheilanthifolium! And as for the crispum part, E. crispum is yet another different species. There is very little difference between this form and plants being sold under names such as E. 'Stephanie'. According to an article by Zdenek Zvolanek, well-known rock gardener, this form was called E. cheilanthifolium 'forma album' by Ron McBeath about 20 years ago... At least that identifies it from the regular veined form.

FIG 3 is a common form in some areas with much larger dark blotches, almost filling the entire top petals.

FIG 4 shows how this species can sport even further, by having the blotches appear on all five petals!

FIG 5 is a plant that has gone in the opposite direction, showing no dark blotches at all, only the pink veining.

FIG 6 is the E. cheilanthifolium 'Bidderi' form that will randomly produce flowers with extra petals. This illustration is drawn after a flower that actually had doubling of the other flower parts as well. Those members that are also in the HPS may recall a photo that I had in their journal (Hardy Plant - Spring 2014) showing E. cheilanthifolium 'Bidderi' flowers that were normal, extra petals and no blotches... All from the same plant!

FIG 7 is Erodium glandulosum, a similar species that also features dark blotches on the upper two petals. The base colour of this species is more pinkish than white but it is still often confused with E. cheilanthifolium. It does not help that this is also a very variable species.

FIG 8 is Erodium celtibericum, and it is easy to see how this one could be confused with a blotchless E. cheilanthifolium (Fig 5). Other Erodiums with similar flowers are E. saxatile, E. rupestre and E. paularense. It has been suggested that the popular E. 'Joy' might even be a selection of E. celtibericum.

I do not have any Erodiums, but if I acquire any---then I will come back to your post on them.

Can you tell us more about Erodiums?  What growing conditions do they need?

How would you germinate seeds if seeds were available?

Well Caroline, that's a big question to explain what Erodiums are... Hard to do in a short answer, but I'll try to put it in a nutshell...

Erodiums are members of the Geraniaceae family which includes the Hardy Geraniums and the Pelargoniums (the ones commonly called 'geraniums'. Most of the Erodiums that are grown come from areas around the Mediterranean. Many are hardy, and those are usually from high elevation areas. Some are not hardy, and can't survive freezing temperatures. Most are perennials, but there are also annuals. Those native to North America are usually weedy annuals. 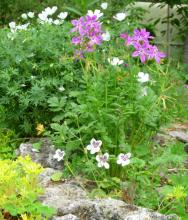 This photo shows two in one of my rockeries. The tall pink one is E. manescavii and the smaller white one with dark blotches is E. cheilanthifolium. Most of them being alpine plants, they are ideal in rock gardens. The vast majority also have ferny, carrot-like foliage.

E. trifolium, seen above, is not all that hardy, and must come in for the winter here in Ontario, zone 4. It is also one with more rounded foliage.

E. televivense happens to be an annual. Like the Hardy Geraniums they produce a 'beak' when setting seed.

When the beaks are ripe, they turn brown and the 5 seeds at the base start to fling off the beak. The part of the beak attached to the seed is called an awn. In Erodiums, the awn curls up when dry. When the seed with awn attached hits the ground, it can bury itself... Moisture causes the awn to twist and straighten out... This drilling action can force the seed into the ground.

When you get seed from clubs such as NARGS, the awns are usually removed.

I usually push the seed (pointy end first) into potting mix, to just below the surface. Germination can be as fast as 4 days, but sometimes a week or two (or even longer). I start them indoors around mid-March so that they are not too large before I can start getting them adjusted to outdoors.

I hope that helps. I don't know where you are located or what climate. Things could vary for your conditions.