Last week I was on a plant collection trip for our BG. We botanized the upper half of the Great Northern Pininsula. The rock here is limestone and has a wonderful array of native arctic-alpines. We had wind, rain and even snow on the trip! (we also had some sun!) They are much colder than St. John's and there were only a handful of plants in bloom. The willows were mostly passed and even the Saxifraga oppositifolia were finished. The first yellow lady's-slippers where just starting. Soon there will be thousands of them! 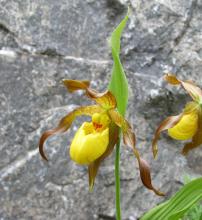 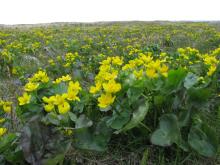 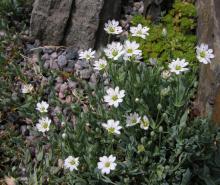 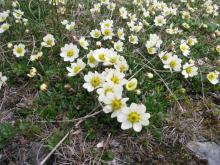 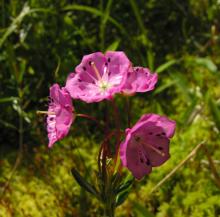 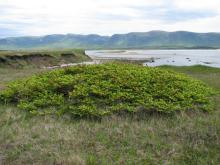 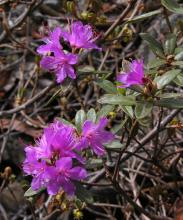 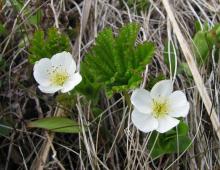 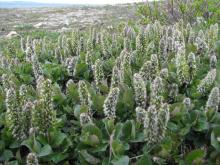 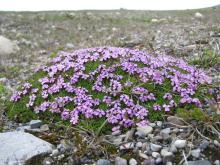 Last set.  I have to do work on the serpentine barrens of western Newfoundland for 18 days in August...they have lots of neat plants but I expect I will be too late in the season for blooms. I always love your pics of wild Newfoundland!  Few of us really know what it is like.

The prostrate white spruce is really something.  I can hardly believe it still has a full center; with all that snow I would have expected major branch breakage over the many, many, many years.  (I am thinking it is about 80 years old.)  Has it been propagated under that name(Tuckamore), or is it the name given to that particular specimen?  Not that I would want to try it here.  I am sure it wouldn't like or hot MN summers.Primula mistassinica looks pretty much the same here in northern Minnesota (not alba) except that your pic shows more robust plants.  Even Olga Lakela (author of A Flora of Northeastern Minnesota) writes that flowers are 2-7 per umbel.  I think the most I've seen is five.

In the back of my mind, I've always been a bit turned of by the structure of crevice gardens that most use, like at your BG.  They seem so artificial and contrived with the stone slabs put  on end.  But looking at some of those wild Newfoundland pics, like the Arenaria and Draba, I'd swear they were taken at a man-made crevice garden like yours.  My eyes are opened wide!

Great pics, all of them!

Rick, we call all stunted conifers 'tuckamore'...essentially a local name which means the same as 'krumholtz' in Europe.

Looks like a fascinating trip, Todd - interesting to see some of "our" alpine species occurring at sea level.

Hmm, "tuckamore" - do you know anything about the origins of the word?  I suspect there's a neat story behind it!  On that note, I was interested to read long ago in Ben Gadd's Handbook of the Rockies (in which the answer to dang near everything can be found!) that the word "kruppelholz" is more applicable to the dwarfing of trees that we see here near treeline* due to environmental conditions (elevation, wind), as apparently the word "krumholz", sensu stricto, implies genetic dwarfing.  Who knew?!?   :o

*Actually, I've often noted that the conditions in Calgary (dry, windy, lousy soil) lead to a particular sort of kruppelholz that is particularly prominent on the neglected trees on city property... not near so picturesque as that in the mountains, though!  ;D

Gee, Todd: all those flowers look to be proliferating so much that you should probably thin some of them out so they don't become weedy. Especially those pesky yellow ladyslippers: we could use more down here!

Tuckamore comes from Tucking Moor.  British used the word 'tuck' as meaning 'to grab, snag or pull'.  'Moor', of course, is barrens.  So slurring the words, as we Newfoundlanders do, we come up with tuckamore, the 'barrens that snag'.  Walking through them, I can understand the meaning!  Generally tuckamore forest are windswept to one side and reach 2-5 m but the image I showed was the extreme where the trees become low mounds.

I always love your pics of wild Newfoundland!  Few of us really know what it is like.

And again an apropos response.  Thanks, Todd!

Ah, I knew there would be a really interesting explanation!  Thanks for describing the derivation of the word... as well as giving us a glimpse of what is a remote destination for many of us (have always wanted to visit but have never managed it!)