The most common Dryas in Alberta, and very widespread, from the foothills (I think it follows some river valleys even farther down out of the actual hills) to alpine areas (Lori can better comment on its presence in real alpine places, though I know it's common in places such as at the foot of the Athabasca Glacier, a site with colonising and alpine flora, though technically it's below the treeline).These first photos are from May 31, 2011, near Nordegg, Alberta in the foothills. This area is naturally forested, but low growing plants take full advantage of cleared areas near the highway...1 Dryas drummondii with the other ubiquitous sub-shrub- Arctostaphylos uva-ursi2-4 typical nodding flower, they remain half open like this5 brighter foliage comes with new growth, this is overwintered foliage6 the mats cover large areas, with many other plants growing through them7 an atypical upturned flower8,9 the mats extend across the open areas and into the edge of the woods, which will likely shade out the Dryas over time, depending how far back the road maintenance keeps the trees10 a view from the edge of the trees to the highway.. 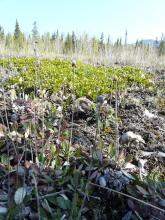 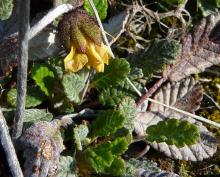 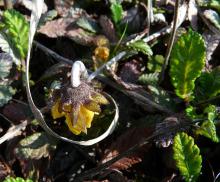 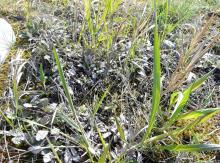 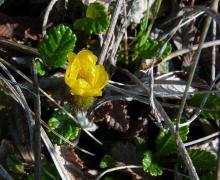 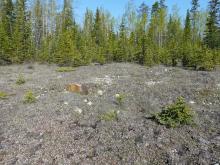 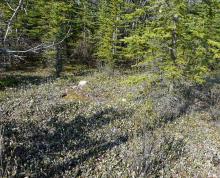 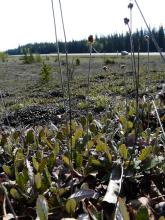 Although this species isn't as showy as octopetala it has its charm. I have tried to germinate seed but didn't have any luck. Has anybody some advise?

I didn't realize that the mats were so extensive. I've never seen it grown by anyone out here. I have tried it several times from seed with no luck.

Although this species isn't as showy as octopetala it has its charm. I have tried to germinate seed but didn't have any luck. Has anybody some advise?

I had germination after 4 days at room temperature with a bit of seed that I collected.  The seeds were covered only enough to keep them stationary (i.e. a bit of sand overtop to hold the seeds down so that they could not be blown away by drafts):http://nargs.org/smf/index.php?topic=963.msg16366;topicseen#msg16366

Thanks Lori, I didn't remember that one. Maybe I should aim for fresh seed then!

It depends what you mean by fresh maybe... The seeds I started were collected in summer but not started until January, no different than if one got them in that year's  seedex.

Edit:  I sent wild-collected seed to the NARGS and SRGC seedexes (and likely some other people did too), so there's a chance to try it again, for those who are interested.

The most common Dryas in Alberta, and very widespread, from the foothills to alpine areas... though I know it's common in places such as at the foot of the Athabasca Glacier, a site with colonising and alpine flora, though technically it's below the treeline).

It has an interesting distribution.  I've never seen it in any of the alpine areas we visit, but it is extremely common along the basal valley elevations, i.e. basically, along the areas where the roads are - where the roads end and the trailheads start.  I have seen it along Highway 93 (Icefields Parkway) in association with white-flowered dryads, as Cohan is describing.  In fact, this drive would be approaching the area Cohan has photographed (Saskatchewan Crossing), but coming up from the south.

Curious... I wonder if it's distribution and presence sometimes with the white-flowered dryads is something to do with inverted treelines?  An inverted treeline is the situation where subalpine meadows occur below treeline due to specific conditions.  An example is the Bow River valley near Bow Summit (also just a ways south of Saskatchewan Crossing), where relatively impermeable slate underlies the glacial deposits, resulting in a very wet valley; the valley is also a conduit for cold air moving down from higher elevations which causes very deep freezing in winter.  The reference* I'm getting this from even speculates that permafrost may still be present in the valley from the Little Ice Age that peaked in the mid-1840's.  The result is that trees can't survive in the valley, though they are present on the surrounding ridges.Here are photos from that area:http://nargs.org/smf/index.php?topic=305.msg2794#msg2794

I wonder if the highway level at Athabasca Glacier is sort of an inverted treeline too, as there are trees right on the other side of the highway from the glacier (see attached link for picture)? http://www.britannica.com/EBchecked/media/17628/A-lodge-stands-at-the-fo...

Here's where I'm going with this.. I wonder if Dryas drummondii is growing right where you'd expect it along the lower Icefields Parkway, but that it's the white-flowered dryads that are somewhat out of place?  They (D. octopetala and D. integrifolia) are only able to live there (at the relatively lower elevations usually occupied by D. drummondii) due to the extra cold conditions provided by the inverted treeline conditions?

*Canadian Rockies Geology Road Tours; Ben Gadd.  The above, and his Handbook of the Canadian Rockies, are excellent references for all things montane!

Oh, I was so excited about inverted treelines, I forgot to add these pictures!  (P.S. Nobel committee - you can put my Nobel prize for scientific advancement in alpine research in the mail...  ;)   ;D ;D) 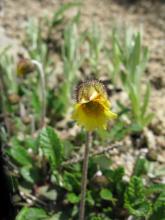 The seedheads all have the same clockwise twist up until the seeds are released to blow in the wind: It certainly does cover vast expanses, e.g. at river level here along the Elbow River in Kananaskis park (the fluffy tufts in both photos are seedheads of D. drummondii): Interesting thoughts about the inverted treeline! I had thought mostly that the alpine plants which are present around the Athabasca Glacier, in areas below treeline (as Lori mentions, you can see treed areas higher up in several directions not affected by 'recent' glaciation) would be sort of colonising species taking advantage of the bare ground left as the glacier recedes. The revegetation does seem to be slow: there are markers along the road from the tourist centre across the highway up to the glacier indicating how long ago the ice was there (the first measurements having been in the mid-late 1800's, without looking it up) and though I have not tried to figure out exactly how that timeline relates to areas just off to the side where I have spent most of my botanising time, it still seems clear that some of these areas must have been out of the ice for many decades if not a century or more, and yet are still not forested! (a few reduced trees scattered around,a bit farther back, but my visits have not spanned enough time to know how fast their progress is) Of course the season is short, so any re-vegetation must take time,  but maybe the cold wind down valley off the glacier also lowers average temperatures enough to slow or prevent re-forestation? This would, however, assume that the winds are colder through the valley than on the forested slopes above... or perhaps, as Lori suggests, there is permafrost involved where the glacier has receded- something I'd never thought of...

As to the size of the mats-- there are places along the highway where the D drummondii extends nearly or completely unbroken for many miles next to the pavement, with variable patches and extensions farther away from the road, depending on terrain and other vegetation..

As for seed, if I ever get around to sorting them out- I should have some Dryas seeds collected in august this year- some may be single species seed, others I just grabbed a few remaining seedheads of any Dryas around that late in the season, and it could be any or all three species together.. anyone interested let me know and I will update when I go through them...

...but maybe the cold wind down valley off the glacier also lowers average temperatures enough to slow or prevent re-forestation? This would, however, assume that the winds are colder through the valley than on the forested slopes above... or perhaps, as Lori suggests, there is permafrost involved where the glacier has receded- something I'd never thought of...

Yes, that's the idea behind the conditions that create an inverted treeline... Saturated soil - from glacial melt, and in this case, with high potential for permafrost beneath which would prevent water from draining away through the underlying sediments.... Cold air flooding down from the extensive icefields above (what you see from the highway is only a small bit of the total icefield higher up)... Cold air sinks which is the reason why it comes down from the icefield to begin with, then continues to be funnelled down the topogrphical low formed by the river valley (Athabasca R. headwaters, in this case)... Cold air promotes ground freezing in this area, aided by wet conditions, which prevents tree growth.  Tree growth is possible on the hillside across from the Athabasca Glacier because it is upslope and above the cold air that's funnelled down across the glacier front and down the valley.

Interestingly, considering it is not an alpine species, D drummondii is the boldest coloniser at this site- on the most exposed spots of the 3 species and near an icey  melt 'lake' etc.. Given that, I wonder why it does not climb to alpine levels? Any thoughts on what mechanisms might prevent it from growing higher up when it seems to be so tough?Perhaps, though, its advantage in the following sites- a flat area near the glacier, which has a large pool of meltwater- is not as much about temperature as about tolerance of potential/ recent past flooding? There are not as many plants here as in the moraines to the other side- mainly Epilobioum latifolium, Salix spp, Dryas drummondii.. I can't say for sure that this area will flood or has flooded in the not too distant past, but it certainly has that look about it...

Or, another possibility, maybe it colonises more spots in this area just because it has those miles long colonies along the highway to supply seed!