Has anyone started this from seed? I have found them to be easy and prolific germinators, even after 4 weeks of drying. With such tiny, fine seed, I would have thought this to be death for a species whose seed is not suppose to not dry out to germinate.

I discovered this after deciding to test germination (thinking nothing would grow anyway) by placing the seed between two paper towels, and then promptly forgetting about. (That part wasn't part of the plan.) After about a month at room temperature, it seemed every seed had germinated. I found some growing through the paper towel, while most were trapped within, and the two layers of paper toweling puffed like a pastry.

I peeled the two paper towels apart, and divided the mass of entangled seedlings in two. Each piece of towel was laid on a light potting mix surface in two identical pots. The were so tiny and delicate, plus so densely arranged, that I was very wary of damping off diseases, and was afraid that any soil sprinkled over would encourage the scourge. One pot got a covering of milled sphagnum, the other #1 granite grit. Both trials were successful sealed in a clear plastic bag, until my attempts to acclimate them to open conditions in the house.

The surface of the sphagnum covered pot dried exceedingly quickly, and eventually suck the life out of every seedling. In the granite grit pot (not having the anti fungal properties of sphagnum), there was still no disease.

So I have seedlings . . . tiny, tiny seedlings that are growing for nearly two months. Only in a south window, they still seem to be very delicate. I have never claimed to be a careful grower, and admittedly, there have been a few times when I though I lost the whole batch due to unexpected intense sun while I was away at work. Numbers have dwindled because of my carelessness, but I still have some. I have only fertilized lightly once, and am still afraid of sprinkling soil them, as it seems likely that they would still be vulnerable to damping off(?) Looking closely at the remaining seedlings, it's evident that some have been badly stressed by my irregular watering. Experience with other seeds seems to sugest that is not the limiting factor for growth. I would expect the to have grown out of it by now. And, some seedlings don't show any visible stress.

Minnesota is one of the sunniest places in the country in winter, and seedlings of Corydalis wilsonii, Impatiens namchabarwensis and Dicentra macrocapnos are doing fine without supplmental light. All of these have been seedlings not even a fraction as fussy as Deinanthe. While more light would beneficial, it doesn't seem to be the limitting factor for Deinanthe.

I just gave them another dose of fertilizer. They have been out of the sealed plastic bag for a month to month and a half. Any care suggestions would be appreciated. 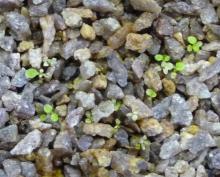 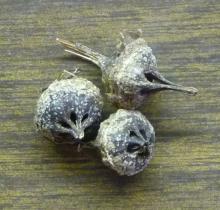 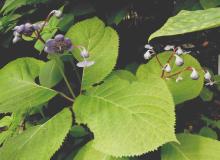 I don't have any seed-starting comments, but it looks like Deinanthe grows very well for you there.  They are hardy here but it seems to be too darned dry for them to be happy.

Talking with other growers of Deinanthe, they all seem to say how easily it runs out of water.  Not a stretch, considering its close relation to hydrangeas.  It's funny though, that that hasn't been the case for for me. Deinanthe caerulea has been quite care free.  The first two seasons I had it, it "grew" in hot full sun (before I realized what it was).  I would come up for maybe a month, and then go dormant (I discovered) for the rest of the season.  Now in dappled shade, it does what it is supposed to do.

You need to send some here!  Moisture is certainly not a problem in Newfoundland.  Never heard of this genus but if you ever get extra seed, I'd love to try it!

Todd, I guess you must have missed me offering it on the DG alpine forum.  I had way to much for just myself, but I had questioned its viability.  At any rate, if all goes normally next season, I'll have a thousand (really) or more seeds.  Plenty for maybe everyone.  I'll test its dry storage longevity too.  It might even be okay for our seed ex.  Moist storage at room temp will just make it sprout.

I don't have any seed-starting comments, but it looks like Deinanthe grows very well for you there.  They are hardy here but it seems to be too darned dry for them to be happy.

Lori, I have the same experience.  Only grow D. bifida ("the white Deinanthe"), but I can barely keep it alive because my garden in summer is too hot and dry.  Had the same problem for years with Kirengoshoma, finally found a spot to their liking where they don't collapse from even a few minutes of drought, and flower magnificently the last couple of years.  Must move my D. bifida on over to the same spot. I have no experience growing Deinanthe from seed, and obviously due to the garden dryness issue in general, have never found a self-sown seedling.  I'd really like to get the blue species going sometime.

Kirengoshoma grows like a weed here, so Deinanthe should certainly do well.  Rick, I indeed must have missed that offering on DG.  Please keep me in mind for next year!

We obtained Deinanthe caerulea years ago from Index Seminum and grew it from seed at Denver Botanic Gardens where we have had it for many decades. It gets regular irrigation, but doesn't seem much fussier than most woodlanders (e.g. Anemone nemorosa or Epimedium spp.). The flowers are magnificent--very waxy. Kirengeshoma is not a weed here, so I suspect Deinanthe would simply swamp Newfoundland...I'd avoid it, Todd!

Fortunately I don't need watering my Deinanthes. But the slugs take their toll, and the flowers are often badly damaged. I have Kirengeshoma too, one plant is near its death due to competition with a Taxus. I have the palmata type, anybody who has tried koreana (with more open flowers according to Dan Hinkley)?

Here's one of my other pets (grownup to tackle the slugs)! 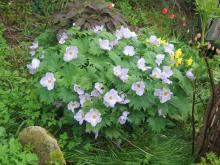 Fortunately I don't need watering my Deinanthes. But the slugs take their toll, and the flowers are often badly damaged. I have Kirengeshoma too, one plant is near its death due to competition with a Taxus. I have the palmata type, anybody who has tried koreana (with more open flowers according to Dan Hinkley)?Here's one of my other pets (grownup to tackle the slugs)!

Trond, your photo reminds me of another casualty in my dry-ish garden, Glaucidium.  What a beautiful clump in flower!  Just searched my image library, and upload two photos of a nice deep color form of Glaucidium I planted in 2001, which by 2003 or 04 was long gone.  Now that I finally have more shade and an area of the garden that retains moisture better (where my Kirengoshomas grow), I must plant this again in this more favorable spot.  I must also most my barely alive K. koreana, it still suffers in the drier part of my garden.

Interesting too, is that when googling "Glaucidium", it gives a whole bunch of species I had never heard of... take a look at this rare species  ;)http://www.google.com/#hl=en&source=hp&q=glaucidium+brasilianum&rlz=1W1D...

I know there are genus names in the plant kingdom that get "recycled" and used in the insect and animal kingdoms, but I was not aware of this one  :D 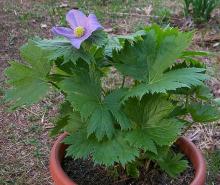 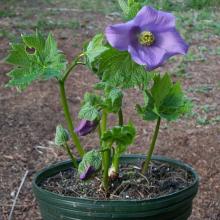