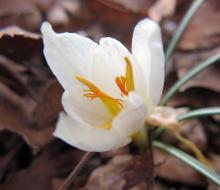 Lovely!  We're having a big chinook melt but that kind of thing is only a temporary respite from winter weather here!

It's 70F (21C) here. Still plenty of snow, especially the new melt-proof kind (a government conspiracy, of course), and it's supposed to snow later this week.

No snow here but rain and hail showers now and then. Not far from here though the ground is covered by 12-15 ft of snow!

The first crocuses show colour despite the lack of sun! But they don't open. 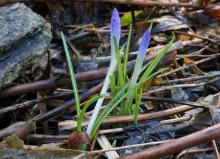 I rarely get plants popping up while there is still snow on the ground because the ground is usually still well frozen.  But as the climate changes, this seems to be changing, too. I just checked the soil temp 7.25 inches down under 8 inches of melting snow (now at the end of a warm weather spell) and it is 32°F.

70 degrees in January is very typical weather for Denver. What's not so typical is the brevity of the warm spells. (Two weeks of 60-70F is more usual.)

They say that climate change will affect more northerly latitudes first; the only thing I've noticed is a succession of bitterly cold snowy winters. There was a large Cedrus atlantica in west Denver which I admired for years; this year, after the sudden drop to -10F in November, the thing is completely brown.

What's interesting to me is the hardiness of the leaves on Crocus niveus. (If rabbits don't eat them.) They're able to photosynthesize in Denver's hot winter sun (even if the air is cold), so they can manufacture the cryoprotective sugars, which suggests to me that the genus Crocus originated in colder climates and this hardiness is inherited. 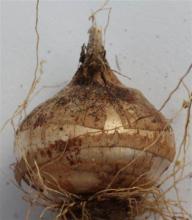 My thoughts exactly, Bob.  We lost a lot of crocus bulbs the other winter,so  I have been suffering from serious bulb envy since then.  I  keep hoping that someone will think its a good idea to have an Aberdeen trial ground for such gems.

When gardeners in the U.K. lost bulbs during the winter, I remarked on the PBS list that bulbs themselves are not very hardy, and the small volume of soil in which they're growing, in pots, making them particularly vulnerable. Galanthus bulbs, say, are only hardy to about -10C. I first read this in The New Plantsman, and it sounded counterintuitive, to say the least, but it explained the constant failure of seed-raised calochortus here. The seed germinates; I have a lawn of calochortus seedlings in each pot; the pots are them left outside the following winter, and there are no calochortus the next spring.

This went on for years until I read the article (can't find it now) and realized that a calochortus bulb might be hardy in a pot to -10C, but not to -30C. (Winters here are a little chillier than those in Scotland....) So the seedlings are planted in the ground, where the larger volume of soil keeps them much warmer.

So, anyway, since I don't have much experience growing crocuses from seed, and it's an effort getting seed when it's available, do you think 25€ is too much for a single bulb? I'd need at least two of each, of course, but the dog needs his steak, too.