I am planning the conversion of our backyard, about 4000 sq ft of largely St Augustine, into a grassless landscape of hardscaping and native plants. I’ve been an avid gardener of rock garden plants in the east and in my new garden I want to grow small Xerophytic perennials and dwarf shrubs that can adapt to this dry and droughty environment of Austin.

The soil structure I have to work with is one of about 18” of clay over a limestone hard pan (caliche). It’s pretty clear that drainage is going to be an issue in growing the plants I want.

It occurred to me that a solution might be to build berms (sloping mounds or ridges without walls) to get the drainage I need. Raised beds are another possibility but berms appeal to me because they let water drain laterally and offer more planting area and microenvironments than a flat surface.

Building a berm of perhaps 20 feet by 10 feet with heights up to about three feet could be an expensive proposition, though. I’m reluctant to use construction fill to build up the base and save cost however because many rock garden plants have long taproots.

I am going to have a lot of St. Augustine sod to remove. Would it feasible to pile the sod up to build the base of a berm and then cover it with 12 inches or so of the gritty soil mix that the plants need followed by a pea gravel mulch. Variable size rocks and a boulder or two would be set into the berm to stop erosion and provide planting niches.

What do you think about the idea of using the reclaimed sod to build up the berms?

Have any gardeners in the region tried using berms to grow rock garden plants? Are there any garden designers or landscapers who have tried this?

I can't say that I gardened in Austin but I did live for 18 months "next door" in Northern Louisiana and visited cousins in Austin a few times - they had Zephyranthes drummondii naturalized in their lawn!

Where I live currently in Central Victoria is somewhat similar in climate and we do use berms! We call them mounds and they are edged in rock but essentially they give the plants a great root zone to grow in as the natural soil is heavy adobe-type clay which is glug in winter and concrete in summer. Our mounds were created by getting an excavator to pile up soil mixed with organic matter and grit/coarse sand/gravel into flattish mounds sitting 18 to 20 inches above the surrounding soil height.

I don't believe in importing soil into the garden as this usually introduces weeds. Composted garden waste and prunings is what we usually get and mix in whatever grit we can get and top off with a mulch - gravel for rock plants and organic matter for others.

We mostly constructed the mounds to plant small trees such as Chinese Pistachio,  Crataegus and Sorbus but these are under-planted with hundreds of bulbs such as iris, liliums, narcissus, tulips, triteleia, habranthus and  zephyranthes. Where we supply some summer water we also grow rock plants such as Penstemon, Oenothera ands aster.

I hope this is helpful for you

One of the few guarantees in life is that berms made of soil will sink, sooner rather than later.

Three pictures attached. Berms are necessary here because the soil is subsoil trucked in from somewhere else when the neighborhood was built. (The native soil is decomposed sandstone, very nice.) Digging in the soil is like trying to get a spoon into frozen ice cream; same texture.

First one is "Mount Zot", which was made from turf, inverted and piled up. The level has sunk about two feet in twenty years. (Hard to see in the picture, maybe.)

Second is a newer berm, about three feet (1m) higher than the path leading to the arbor in back. This has a "backbone" of broken concrete, old tires, old National Geographic magazines, and maybe the old "exer-cycle" (can't find it, so maybe it was buried). The growing medium is pea gravel and sand, with no organic matter. No irrigation is needed because all rainfall goes directly to the roots. (Just the opposite of what "drainage" suggests.)

Third is another raised bed, "backbone" of cinder blocks. This was made out of soil, which sank, and now the composition is about ten percent soil and ninety percent gravel. The bed behind it, on the other side of the weirdly-branched Crataegus ambigua, is pure gravel and sand. 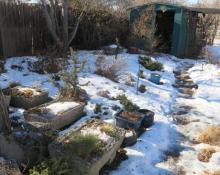 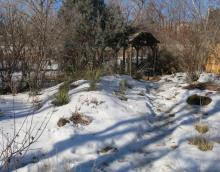 Using soil to build up a berm is not entirely problem free as Bob's photos suggest.  I might want to rethink using construction fill instead.  Here in Austin there is so much construction of buildings and roads that getting rid of the excavated limestone is a problem. Its quite inexpensive and often free at many sites. Someone else in a local gardener blog also pointed out that Bermuda grass is pervasive here and can be a real problem if it is not entirely removed. Usually that's done through solarization in the summer (quickly in 100 degree weather) or Round Up in the winter

Newspaper several sheets thick will take care of the grass. You can make a berm on top of that. I'm jealous of the limestone; all we have here is granite, which is okay, but it isn't limestone.

It helps to know the habitat of the plants you intend to grow, and especially, the soil texture and rainfall patterns. Soil texture is a critical factor in survival of xerophytic plants during drought. A lot of that information is available on the Lady Bird Johnson site, wildflower.org.

Our new home that I'm landscaping is about 15 minutes down the road from the Lady Bird Native Plant Center. I started to volunteer there when I arrived a couple of years ago.  That's when it dawned on me that I could grow natives and adapted plants if I studied the environmental setting of central Texas and rethought my approach.  I gardened at my summer place in the Shenandoah valley with deep sandy loam and a completely different climate. None of the plants I grew and few of the techniques I used would work here.

Lady Bird is indeed a fantastic resource.  A few years back it was turned over the University of Texas to run. That's stabilized it financially although they have had to cut back in some areas.  What I think mattered were connections that developed between some of the academic departments, such as Landscape Architecture and the Botany program in Biology. The center has a very accomplished staff.

What I don't feel here is a coherent sense of "rock gardening" as we understand it.  Don't bet me wrong...everybody has rocks in their gardens given the geology of Central Texas and there are some excellent plant nurseries that due to the Lady Bird center's influence sell a huge number of natives (also because of water scarcity). And there is a very active cactus and succulent society here. But I miss a shared understanding of the content our community attaches to "rock gardening" e.g. its history, origins in England, key figures, our approach to what is a "rock garden" plant,  ...

Maybe it will happen over time. It was encouraging to see the formation of a New Mexico chapter of NARGS and I look forward to visiting the nurseries and botanic gardens there and in Colorado.

Yes, the wildflower site is excellent, especially since they are open to being corrected on their botanical nomenclature. (I got them to change the name of Vernonia lindheimeri var. leucophylla to the accepted name, V. larseniae.)

One problem you might face in visits to states to the west of you is that the rainfall there mostly comes from thunderstorms, which makes a huge difference in the way plants respond to water, and in the soil textures in which they can grow. A plant that grows in gravel in New Mexico does so because it can make the most efficient use of the rain that falls on it; in a climate with regular rainfall like Austin (according to Wikipedia) this might require a different technique.

One of the important things in rock gardening is being able to filter regionally-oriented cultivation information from general information useful in all climates. It isn;t always easy to do that, and local gardeners can be a big help.

I feel like a relative newcomer still trying to get a sense of the gardening community. Just today I was leafing through a couple of respected books by Sally Wasowski and others, Landscaping with Native Texas Plants (1985)  and Native Texas Plants: Landscaping Region by Region (1997). Each one has a page or two describing what a Rock Garden is from our perspective (English origins, small alpine plants, natural looking rockery ...) and mentioning the constraints in making this model fit Texas soils and climate. Each description is followed by a sample rock garden plan .  So these authors at least are certainly aware of the rock garden tradition.

I'll keep my eyes and ears open to see what the possibilities might be.

One criticism I have of the chapter on rock gardens is all the talk about "drainage". Plants don't need "drainage". The author does then contradict the idea of "drainage" with the correct statement that rocks help channel water to the roots. That's what happens in real life. Chasmophytes, for instance, grow in rock crevices because they can, not because of any need to "drain away excess water".

Another thing I might mention is that some of the recommended plants come from quite disparate climates. Look at the Wikipedia entry on the precipitation of Alpine, for instance, compared to that of the Hill Country.