Lesquerella ovalifolia, aka Lesquerella engelmannii var. ovalifolia is a highly localized endemic on the calcareous shales along the Arkansas river in the vicinity of Canyon City and Pueblo in southern Colorado. A trough featuring the many choice plants found in this area was created almost ten years ago as part of the trough exhibit at Denver Botanic Gardens. Quite a few of the special plants of this region were initially included: Echinocereus reichenbachii, Penstemon versicolor and P. auriberbis come to mind...and much more. Over the years, almost everything has disappeared except for this cheerful Lesquerella that has filled every square inch of the pot with its silvery mats and bright yellow flowers in March and April (and decorative bubble like seedpods after that)...One feels a bit guilty weeding it out (alas, it transplants badly)...oh well: goes to prove that rare is a highly relative term! 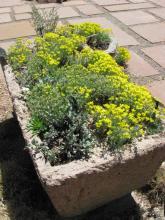 Many of these postings remind me about just how many plants I once had and since lost.  I like Lequerella and Physaria very much, such cheerful silver and gold plants.  The only one still with me currently, is L. arizonica, a tiny little plant.  Looking through my old digital photos, I found a few of L. ovalifolia.  The first photo shows seedling plants flowering in 2001 from 1999 NARGS seed, the one on the left labeled L. wardii (which is certainly is not) and on the right, L. ovalifolia.  Then a photo of two small plants flowering in a trough in 2003.  Then two views of the same trough taken in 2005, where the plants literally flowered themselves to death, flowering over a period of many weeks.

That year, most everything in this trough died during an extended hot and dry period, including the Lesquerella, leaving behind no seedlings.  Panayoti, save me a pinch of seed of this one, so that I may have a trough as overflowering with these cuties as the one you show.

Googling some Lequerella species, it is shocking to see just how many web sites show images of plants that are not even the right genus!  But here's an interesting link to 3 photos of L. ovalifolia as found in Oklahoma... looks a bit different. 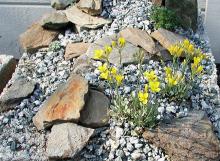 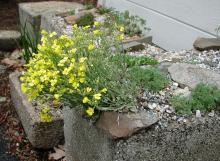 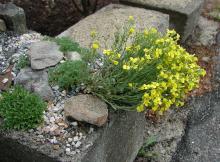 Amazing to see how well these have grown for you, Mark! I notice they are leaning mostly outside the trough: poor little seed didn't land where they should have! I will search my files: bet I have a bunch of this from last year...

Many of these postings remind me about just how many plants I once had and since lost.  I like Lequerella and Physaria very much, such cheerful silver and gold plants.

These postings remind me of all I don't know about worthy plants!

Many of these postings remind me about just how many plants I once had and since lost.  I like Lequerella and Physaria very much, such cheerful silver and gold plants.

These postings remind me of all I don't know about worthy plants!

;D  If it is any consolation, there are still tons of worthy plants that I know nothing about, even of their existance!

When I bought my (or rather we bought our!) first house with a garden I was young (younger than now, I mean) and grown up in Oslo I had seen about 10 different Rhododendrons. So I decided to find and plant all the Rhodos I could. But here on the west coast it is good rhodo-climate so in a couple of years I had understood that the task was a formidable one so I gave up the project. Since then I am a Little more sober when coming to plant collecting. But still I plant too much, plants new to me appear every year. This is one of the things that do life worth living.