Amsonia - Bluestars, perennials in the Apocynaceae

Amsonia is a favorite genus of mine, a small genus in the Apocynaceae, with 16 species in the USA, a few more in Mexico. There are a few so-called Amsonia outside of North America, but these are now accepted as the genus Rhazya.

Of the more popular ones is Amsonia hubrichtii, the threadleaf bluestar, from Oklahoma and Arkansas. It needs room to fully appreciate the billowing mound of thread-fine foliage, famous to turning yellow or gold in the autumn. Another species less frequently encountered is A. rigida, from southestern USA. It is one of the smaller species, an excellent well-behaved perennial with small broad leaves, among my top 20 favorite perennials. It grows approximately 2' tall. I find that Amsonia hybridize with wild abandon when brought together.

In theis single photo, I put numbers on the plants, they are as follows:

3. A willowy hybrid that is perfectly intermediate between the two, A. rigida x hubrichtii (or the other way round).

4. A swarm of hybrids down-slope of the parent plants, every leaf size and shape from thread-leaved hubrichtii ones to the broad-leaved rigida types.

I hope to follow up with photos of these plants in flower.

Mark - I greatly look forward to seeing pictures of your amsonias in flower. These have long been a favourite genus of mine too; very tidy plants of a sort of restrained beauty when you observe the flowers closely. But they are slow to grow on and reach flowering size on the nursery and so not much seen. I am trying some of the 'desert' species from Alplains. Rick Darke wrote about Amsonia in the RHS Plantsman Vol. 4, p.72-75, showing a few new selections, like ciliata 'Spring Sky', that look very attractive.

I am in the act of becoming interested in this genus. It started about ten years ago with some seeds i collected in the Owyhee mountains in southern Idaho and subsequently released into my garden. i have one big plant that came from this which sets seed reliably. I wish i had GPS with me so i could have captured the exact location as i think this is the only record of it in Idaho(to my knowledge). I did plant some seeds of Amsonia tomentosa i'm still waiting for some germination not sure how long it should take but judging by the heavy duty seed coat i expect it will take a few years.

..... and I am interested in that genus and have tried several species but they always disappear after some years :(

Tim:  one can google Rick Darke Amsonia and a PDF version of the article comes up.  I too am interested in the western Amsonia, and from Sally Walker I have Amsonia peeblesii in the garden (from Arizona); indeed it took a long time to flower from seed, these southwestern species are rather distinct.  I will have to dig up some photos from last year; it tends to sprawl and is not as photogenic as upright species, but intriguing nonetheless.

Jim: I'm fascinated by your account of Amsonia from southern Idaho.  Based on the USDA maps on Amsonia, none are found in Idaho, yet two species have reported ranges from the south that abutt Idaho, namely A. jonesii and A. tomentosa.  Your finding could be a new record! I've seen photos of A. tomentosa, and it looks like a most desirable low growing one.http://plants.usda.gov/java/profile?symbol=AMSON

Trond: these are plants for sun and dry soils (that's why they like my garden).  They are really tough indestructable plants once established, never sulking from drought (I never need to water mine).  If you can find a spot in full sun and well-drained loamy soil, they should do fine.  I'll watch for seed this year (they obviously make lots of seed, judging from all my hybrid seedlings).  Any seed I gather will likely produce hybrids.

The following is a flower profile for A. rigida, and a bit on A. hubrichtii and its hybrid. 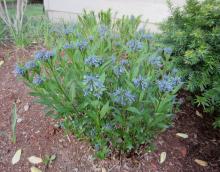 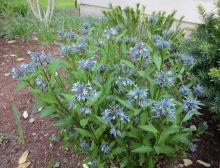 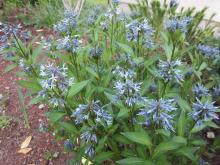 Later flowering on Amsonia rigida, the color becomes a lighter blue.  In the second and third photo, one can see the budding spikes of A. hubrichtii emerging in the background. 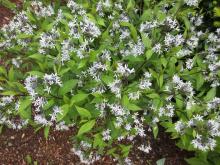 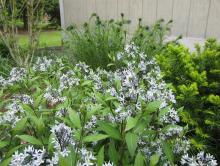 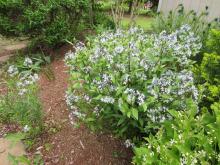 Amsonia hubrichtii budded.  I didn't take any photos of this species at peak bloom this year, will try to dig up some photos from previous years.  While A. rigida blooms first, there is some overlap in bloom time with A. hubrichtii, thus the numerous hybrids. 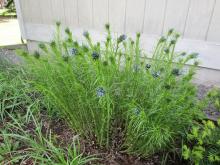 The hybrid Amsonia hubrichtii x rigida (or the other way round) flowering, looking much like hubrichtii, but with willowy foliage perfectly intermediate between hubrichtii and rigida. A view taken mid June 2012, with the fine folaige clump of A. rigida in the lower center, the thread-leaf A. hubrichtii in the upper right, and the willow-leaf hybrid between those two species in the lower left.  Behind it in the upper left is Hypericum frondosum, which is currently a mass of large golden powder-puff blooms, a summery spectacle. 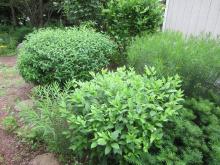 Trond: these are plants for sun and dry soils (that's why they like my garden).  They are really tough indestructable plants once established, never sulking from drought (I never need to water mine).  If you can find a spot in full sun and well-drained loamy soil, they should do fine.  I'll watch for seed this year (they obviously make lots of seed, judging from all my hybrid seedlings).  Any seed I gather will likely produce hybrids.

Mark, seems I have chosen the wrong place for them! From what you tell I should try some at my summerhouse where the climate is much drier (or used to be . . . .).And I wouldn't mind trying some of your seed whether it is hybrid or not ;)

Amsonia rigida is a new one for me, Mark: love it. I keep finding new amsonias--there are a lot of rather local ones in the Southwest.

All thrive in our gardens (although the easterners need more water). I am including a few pix of some of my favorites from my home garden, and the Botanic Gardens for your comparison below.

1 and 2 are pix of Amsonia illustris, my most vigorous species that self sows quite a bit. It blooms for a very long time and is spectacular in the garden, so I have a lot of it. It gets over 4' tall (maybe 5)...but starts out low.

3 is a closeup of Amsonia jonesii, probably the loveliest in my esperience in this genus. It starts to bloom at ground level, sometimes in March, and blooms until June: wonderful deep sapphire balls of color. Extremely xeric--grows in deserts of less than 5" precipitation.

4  this is a young plant of Amsonia montana, with the widest leaves of any species, and very dwarf habit (12" or so). Quite dark flowers.

5 Amsonia orientalis used to be classed in another genus (Rhazya), but it is very similar to other Amsonias: this is the only European species, I believe. Also rare in Turkey. It is a superb garden plant with very good color over a long season (lasting for months)

6 Amsonia salicifolia is often classed as a subsecies of typical tabernaemontana: it is definitely a tad smaller and very good in color (as you can see)

7 Amsonia is one of the rare southwesterners, a wonderful pure white. It is small enough for a large rock garden, and extremely long lived. Very moisture sensitive however (it's a dryland plant) 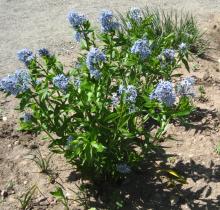 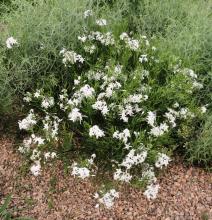 PK, really smart smattering of Bluestars, such worthwhile plants to grow.  Love the look of A. tharpii, so twisty and fine-foliaged, and fine milky flowers.  Amsonia jonesii looks first class too, I wonder how this xeric species (as you describe it) would do in New England?  I do grow A. peeblesii from Arizona (Sally Walker seed, in my garden for 10 years, photo below), which grows so slowly and sprawling, but with fine milky flowers, the plant growing in a sandy enbankment.

Yes, A. salicifolia is generally regarded as A. tabernaemontana v. salicifiolia, another nice one.  I haven't yet added Rhazya (Amsonia) orientalis to my garden, but it's on my list of ones to try.  I beleive the name Amsonia "montana" to be an invalid never-published name, one of those horticultural misnomers that's deeply embedded and unlikely to be corrected, many sites stating this is really just a selected low-growing form of A. tabernaemontana (my theory is that years ago someone's label got worn and hard to read and only the "montana" portion of tabernamontana remained; thus voilà, a new "species" was born).

Richard Darke in his article on Amsonia (see link below) states "Amsonia montana is a name of no botanical standing that appears in many horticultural reference books and in innumerable nursery catalogues. It is associated with a low-growing (to 60cm tall), small-leaved form of A. tabernaemontana".http://www.google.com/url?sa=t&rct=j&q=&esrc=s&frm=1&source=web&cd=12&ved=0CGYQFjABOAo&url=http%3A%2F%2Fwww.rickdarke.com%2FAmsonia.pdf&ei=dOYVUJ_6MajH6gH69YDQCQ&usg=AFQjCNFn_0Fy_eaSk0h1stjkNPB4fzCgYg

A couple of recent selections are also on my radar, selections that are low growing and with showy deep color blooms, A. tabernamontana 'Blue Ice' and 'Short Stack', once again sometimes attributed to the mythical A. "montana". 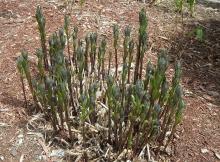 The famous fall foliage of A. hubrichtii: So nice to see these different species - peeblesii is one I have attempted to establish for a long time and must try again. It will probably take quite a long time to get plants as striking as those pictured. I have found hubrichtii very slow here although other gardens have strong fine clumps. The autumn colour is spectacular.

Have to look out for some of these, that's certain! I didn't know that many species existed - although it's no surprise! Think some will do well at my summerhouse.