A couple of lupins bought from Beaver Creek and planted this year - Lupinus wyethii (with this year's seedling Salvia pachyphylla in the background - if it survives and thrives, it may one day outgrow its spot... I don't think I'll worry about that just yet ;)) and Lupinus aridus ssp. ashlandensis, which has put up a couple of flower buds:

Those are extremely moreish plants Lori! I must try and emulate that coarse tufa scree. I have a few lupin species germinating and the bigger species like albifrons have made magnificent, if short lived, specimens in the garden.

Cute little Lupines! I wonder if the second will get a chance to mature its flowers?

I like these little Lupines more than the huge Russel hybrids often grown in gardens here!

This year's seedlings of Astragalus loanus... one doing OK so far, the other not so well... very difficult to grow, according to Stephanie's article in the fall, 2011 RGQ, so this may well be the best look I get at them!

Two of this year's seedlings of Dracocephalum multicaule (seed from Pavelka:  "2400m, Aras Dag, Turkey; dense cushions, erect leafy stems, 10-15cm, many white to pale yellow flws, stoney slopes").  One is a very attractive plant though with smaller flowers than the other, less dense, but larger-flowered one.

Lori, many gems but the lupin is the diamond - so far ;D

I got that Lupinus from Beaver Creek as well....didn't even live long enough to plant out!  It seems to detest wet. 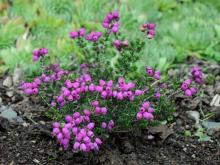 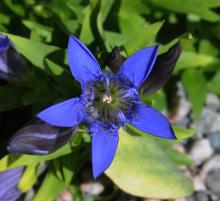 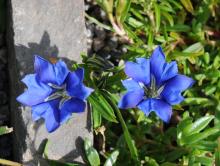 Nice, Todd! Here the fall rain has started and it is completely soaked everywhere :(

No flowers but here are some nice Saxes on my roof. Hope they flower next spring!

This is a real little treasure flowering for the first time, though it has grown vegetatively quite happily for several years, Gentiana depressa. Only one flower but somehow it commands attention. I am quite surprised this grows with us at all in our dry garden and expect I will now be told that it makes huge flowering mats all over Scottish gardens! This belongs to the same section as the rather legendary G. urnula, all nicely described and drawn in Josef Halda's monograph on Gentiana. I think I may be lucky to grow any more of them! 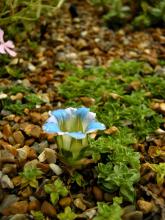